US envoy Stern calls for climate truce in Congress 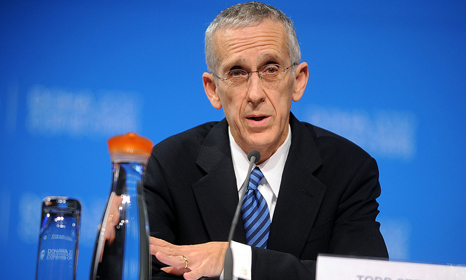 The USA’s senior climate envoy Todd Stern says a new global agreement to cut emissions is still on the cards, despite the unwillingness of Congress to back any new low carbon legislation.

Stern said the Administration was committed to an “ambitious” UN climate agreement in 2015, but said domestically the US needed to “get back to the days when practical, pragmatic legislation can be passed.”

“Action in Congress right now is unfortunately not in the cards,” he added.

The influential State Department official was addressing the launch of a new UN-backed study into new climate laws around the world, which revealed nearly 500 laws in 66 countries have been passed since 1992.

Despite being held on Capitol Hill and hosted by Senator Edward Markey, no senior Republican officials could be seen at the launch, which was attended by the UN Assistant Secretary-General Robert Orr, UN climate chief Christiana Figueres and World Bank Group Vice President Rachel Kyte.

Figueres: there are no regrets in backing tough climate action

Markey, a Democrat, said he hoped the evidence of extensive climate legislation around the world might convince members of Congress opposed to any new green laws to think again. “I urge colleagues here in the United States to acknowledge the movement and take action,” he said.

President Obama says he will try and meet international emission reduction commitments without passing any new laws. Last week the White House announced new fuel efficiency standards for trucks, while in June it will release a set of rules governing carbon pollution from power plants.

The US has been historically opposed to signing any UN treaty that restricts the levels of greenhouse gases it can emit, and officials are pushing for a more flexible arrangement within the UN where countries will determine their own targets.

Lord Deben, head of the UK Committee on Climate Change, a government advisory body, told RTCC he believed this latest study would show how that approach could work, provided it is clear how emissions are measured and reported.

“It has to be tackled through domestic activity,” he said. “It’s only by doing things in each individual place that you achieve the total end, but of course there has to be an overarching system.”

Deben, UK Environment Secretary between 1993-1997, agreed with Markey that the study would also show those who doubted the global commitment to addressing climate change they are wrong.

“The idea that we’re stuck out there way ahead of other people is no longer true…one of the great advantages of this document is that it shows everybody they’re not the only ones,” he said.

“Look at Portugal, Korea, China, South Africa, Mexico…you are beginning to see there are countries determined to beat this global threat.”

He added that the recent decisions of the governments of Australia and Canada to dismantle their climate laws were “odd”, “sad” and “selfish.”

“I hope it will remind Canada and Australia who are in an outrageously unacceptable position, because they have stepped aside from what is happening in the whole of the rest of the world. For two English speaking countries to have done that I think is really sad,” he said.