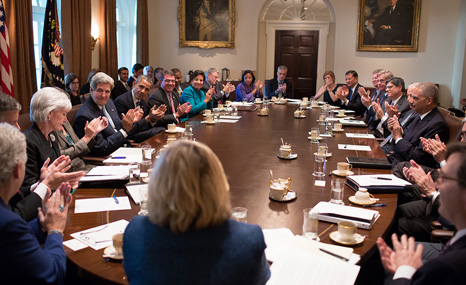 The US Government is working on new greenhouse gas emission targets to submit to the UN, according to reports from Washington.

The ClimateWire website cites unnamed officials who say three meetings have taken place at the White House since September, where the level of potential reductions has been discussed.

It reports the Administration is discussing whether goals should be for 2025 or 2030, and how cuts could take place if Congress refused to ratify any further climate-related legislation.

This was based on planned carbon cutting legislation Congress refused to ratify, but offers a sense of what was on the table.

“They have definitely begun an interagency process which is the way the US makes decisions,” Jake Schmidt, International Climate Policy Director at the NRDC told RTCC.

“I think there’s a lot of discussion about what’s the timeframe for a target – the US isn’t the only one that has been kicking this around – but in interactions we’ve had that’s a topic they have raised.

“They’re thinking – separate from the number – what’s the policy basis to that number, and there are obviously issues around that which are political but also Obama passing a platform to the next administration.”

Lou Leonard, Vice President of WWF’s Climate Change Program, agrees there are signs the White House has started the internal work on developing a proposal for March 2015, the date climate envoy Todd Stern says it will be delivered to the UN.

“Everybody is going to be looking at everyone else to see if they’re serious, and then what they’re willing to do. I think this is the first signal that the US is serious and what they’re going to do, and that they are going to think carefully before they put a number out,” he said.

Ambitious targets from the White House are seen as essential for the UN process to deliver a credible agreement on addressing climate change in Paris next year.

A study commissioned by UNEP last year revealed annual emission levels need to be cut 12% on 2010 levels by 2020 to avoid dangerous climate change.

Whatever carbon target the US aims for is likely to influence China, the world’s largest source of climate warming gases.

In the aftermath of the 2009 Copenhagen talks the US and China issued targets within 12 hours of each other, which was seen my many as a sign of their symbiotic relationship in the UN talks process.

China energy experts have told RTCC an emissions peak by 2025 is possible, but would require huge investment in carbon capture technology and a move away from coal as a primary energy source.

An open dialogue between the two countries on this issue continues, with Secretary of State John Kerry expected to discuss climate change at meetings in Beijing on Friday and Saturday.

Schmidt says previously proposed reduction targets of 30% by 2025 and 42% by 2030 are “still in play”, but warns that the more substantive policy decisions on how to reach those goals are still being discussed.

Without strong foundations other countries may treat any US pledge with scepticism, noting Canada and Japan’s decisions to withdraw from the Kyoto Protocol, the world’s only legally binding climate change treaty.

President Obama’s Climate Action Plan outlined how he would use Executive powers to drive carbon pollution cuts, specifically through the Environmental Protection Agency, but these are strongly opposed by some elements within Congress.