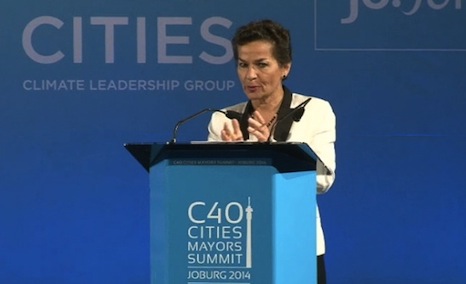 Christiana Figueres spoke of the importance of cities in Johannesburg today

New York’s former Mayor Mike Bloomberg is set to play a critical role in the development of a global emissions reduction deal, according to UN climate chief Christiana Figueres.

Bloomberg, who was appointed as the UN’s special envoy on cities and climate change by Ban Ki-moon last week, will be Figueres’ righthand man when it comes to explaining the urgency of climate change. She said that she expects to be frequently “knocking on his door” when he takes up the post.

She told RTCC: “When I have some stakeholder who hasn’t quite understood the urgency, I think I’ll put Mike Bloomberg on the phone.”

Bloomberg’s extensive experience in tackling climate change as mayor of New York means that he will be “extremely helpful” as the UN’s climate change branch tries to draw together a globally binding treaty to reduce emissions in 2015, she said.

He introduced a programme of actions to tackle climate change in the city in 2007, called PlaNYC 2030. This set a goal of cutting emissions 30% by 2030 through a number of initiatives, including building more bike lanes, introducing hybrid taxis and retrofitting municipal buildings to improve their energy efficiency.

His appointment appears to have widespread support.

Samantha Power, the US ambassador to the United Nations, tweeted that he “knows how to get things done”. The World Resources Institute called the decision an “inspired choice”.

Mayor @MikeBloomberg knows how to get things done. We need more leaders like him here at the @UN.

Speaking to RTCC at the sidelines of a C40 Summit in Johannesburg today, where mayors of 63 cities had gathered to discuss urban solutions to climate change, Figueres contributed yet more accolades.

She said: “He is a very well connected individual in addition to being to former mayor of New York. Because he understands the issues so well and has lived through them, he is probably the best communicator of the need to act quickly.”

The billionaire businessman is the latest in a series of high level appointments by UN chief Ban Ki-moon, as he attempts to ramp up the political will prior to the signing of a climate change treaty in Paris 2015.

In December, Ban appointed the former leaders of Ghana and Norway as special envoys for climate change, who will engage with heads of state to raise ambition as meetings progress.

Famed for its glacial progress, there appears to be a new momentum around the UN climate process in recent weeks.

Leaders of international financial institutions have indicated that they are no longer willing to ignore the potential future impacts of climate change, highlighting that a failure to stop the planet warming could have serious economic consequences.

Speaking to an audience in London on Wednesday, Christine Lagarde, head of the International Monetary Fund, said that the world was “perilously close” to a climate change tipping point, while the head of the World Bank has said that governments and businesses should consider withdrawing their money from fossil fuel companies, which are the largest contributor to human-caused climate change.

Figueres, who has led the UNFCCC climate negotiations since 2010, said that while the international process is vital in setting an overall policy framework, the real action to tackle climate change takes place on the ground, in cities and at a sub-national level.

“They are living proof that we are all better off by acting on climate, and that is exactly the logic that we need to take to all level of the debate.”

Delivering a keynote speech at the C40 Summit earlier in the day, she told the audience of mayors that “I need you and you need me,” and that local governments must work together with national and international leaders to mutual benefit.

A report released today showed that actions to tackle climate change at city level had almost doubled since 2011.

Speaking at a press conference, Bloomberg said: “We can’t do it all but with the UNFCCC (UN climate body) we can attack the problem at both ends.”