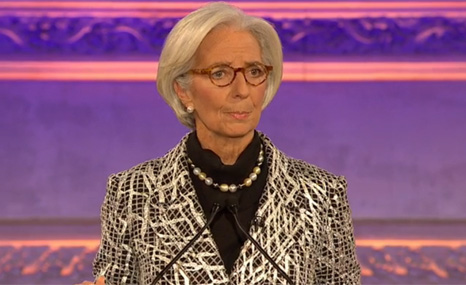 Addressing an audience in London, Lagarde said reducing subsidies for fossil fuels and pricing carbon pollution should be priorities for governments around the world.

“Overcoming climate change is obviously a gigantic project with a multitude of moving parts. I would just like to mention one component of it—making sure that people pay for the damage they cause,” she said.

“We are subsidizing the very behaviour that is destroying our planet, and on an enormous scale. Both direct subsidies and the loss of tax revenue from fossil fuels ate up almost $2 trillion in 2011—this is about the same as the total GDP of countries like Italy or Russia.”

Describing the predicted consequences of climate change as “merciless”, Lagarde said leaders had to engage in what she called a “new multilateralism”, rekindling the “Bretton Woods spirit” which saw the creation of the IMF in 1945.

Lagarde’s comments come at a critical point in international efforts to address rising levels of greenhouse gas emissions. The UN expects a global deal will be signed in Paris next year. Preliminary negotiations are set to restart in Bonn at the start of March, with a draft text expected in November.

In recent weeks UN Secretary General Ban Ki-moon, US Secretary of State John Kerry and World Bank President Jim Yong Kim have all called on countries and business to take the threats posed by global warming more seriously. Jim made what many believe was an historic call for investors to consider ditching holdings in fossil fuel companies.

Lagarde, whose organisation is one of the key supporters of the UN-backed Green Climate Fund, added that investment in poorer regions was essential to ensure they can cope with a range of extreme weather patterns that could emerge as a result of climate change.

“Make no mistake, it is the world’s most vulnerable people who will suffer most from the convulsions of climate,” she said.

“For example, some estimates suggest that 40% of the land now used to grow maize in sub-Saharan Africa will no longer be able to support that crop by the 2030s. This will have hugely disruptive implications for African livelihoods and lives.

“A few years back, Prince Charles gave this very Dimbleby lecture. He used the occasion to make an impassioned plea to respect the natural law of ecological sustainability. “In failing the earth,” he said, “we are failing humanity”.