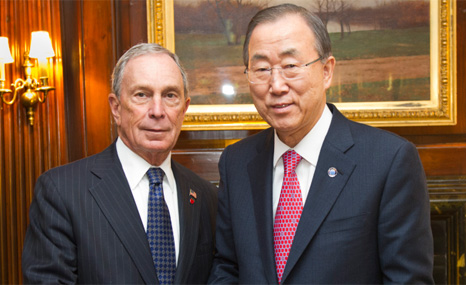 Former New York Mayor Mike Bloomberg will be announced as the UN’s special envoy for cities and climate change in the next 24 hours.

Secretary General Ban Ki-moon is in Bonn today for meetings with UN climate chief Christiana Figueres, where he could make the announcement, RTCC understands.

Reports in Reuters this morning suggest Ban is keen to “re-energize the global climate change debate and boost the United Nations’ role”.

Addressing New York’s resilience to extreme weather and climate change was one of Bloomberg’s priorities while in office.

In June 2013 he proposed a $20 billion climate adaptation plan, in response to the damage caused by Superstorm Sandy in late 2012.

“Cities are on the frontline because federal, national and international organisations aren’t doing anything,” he said.

“They either deny that the world is changing or they say that it’s not changing so fast that we should do anything about it but all of the scientific information that we have and the empirical evidence that we see … these are things that somebody’s got to worry about.”

Bloomberg’s PlaNYC 2030, launched in 2007, aimed to cut city emissions 30% by 2017. He also encouraged the use of electric vehicles, and told citizens to “recycle everything.”

The appointment will come ahead of a high level meeting of leading mayors and the UN at the C40 Climate Leadership summit in Johannesburg next week.

Cities are expected to play an increasingly important role in reducing carbon pollution levels. By 2050 the UN estimates 70% of the world’s population will live in dense urban environments.

Ban’s intervention comes at an important time for efforts to develop a coherent global response to climate change.

In December he appointed former Ghana President John Kufuor and ex Norwegian PM Jens Stoltenberg as special envoys for the world leaders’ climate summit he will host in September.

A draft text for a global climate deal is expected to be presented to governments in November, ahead of a summit in December 2015 where countries are expected to sign a UN-backed treaty or agreement.