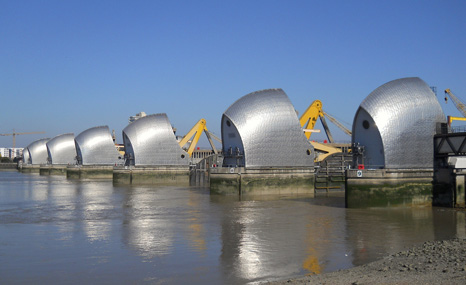 London’s Thames Barrier could be tested by ever increasing high tides due to sea level rise (Pic: David Holt/Flickr)

The worst of climate change could mean that one in 20 of the world’s inhabitants experience regular flooding by the end of the century, underlining the immediate need for deep carbon emissions cuts and major investment in flood defences, a report published on Tuesday said.

The study, authored by Germany’s Potsdam Institute and the Global Climate Forum, said rising temperatures, melting of polar icecaps and glaciers and increasingly violent storms could swamp densely-inhabited coastal areas, wiping out around 10% of the world’s wealth by the end of the century.

“While coastal protection can reduce sea-level damages significantly, the corresponding adaptation costs get bigger and bigger the longer we wait with our mitigation efforts,” said Anders Levermann, a scientist with the Potsdam Institute who initiated the study.

He added: “Adaptation, as necessary as it is, by no means can be a substitute for reducing greenhouse-gas emissions.”

The report added that estimates of future damages and adaptation costs are essential for supporting efforts to cut carbon that are blamed for raising sea-levels and help design ways to adapt to the increasing risk of floods.

In the worst case scenario, an eye-watering $71 billion a year would need to be spent on flood barriers and defences by the end of the century, although the economic impact of doing nothing would be much more, the report’s authors said.

At the lower end of the scale, a less serious rise in sea levels could still impact 1 in 200 of the world’s population every year, or tens of millions of people, and lower GDP by still significant 1% by the end of the century, the report added.

The wide range in the paper’s scenarios are mainly the result of uncertainty among scientists  about how much the world’s oceans will rise, which was acknowledged  in a 2013 report by an influential UN scientific panel.

The German academic study comes as concern grows in both rich and relatively poorer countries about the impact that rising sea levels could have on the world’s biggest cities, with major urban centres such as Shanghai, Mumbai, Ho Chi Minh City and New York among those seen as particularly vulnerable.

Current UN climate envoy Michael Bloomberg, a former New York mayor, has pointed to the widespread flooding of the US’ largest city by Hurricane Sandy in 2012 as the type of event that could become increasingly regular and severe as sea levels rise.

Tomorrow, Bloomberg and mayors from the C40 group of the world’s biggest cities will gather for a summit in Johannesburg to discuss how to reduce the contribution of urban areas to greenhouse gas emissions and how best to adapt to a changing climate.

While flooding of cities in poorer countries often causes much less economic damage than in rich ones,  as many are uninsured and lack infrastructure, the human cost of flooding in developing nations is much higher, reinsurer Munich Re said in a report last month.

Severe coastal and inland flooding in Europe during the past 12 months, and a devastating storm surge from Supertyphoon Haiyan in the Philippines are the type of weather events that could be linked to the warming of the world’s oceans, some scientists suggest.

However many acknowledge that its difficult to blame one particular weather event on climate change.