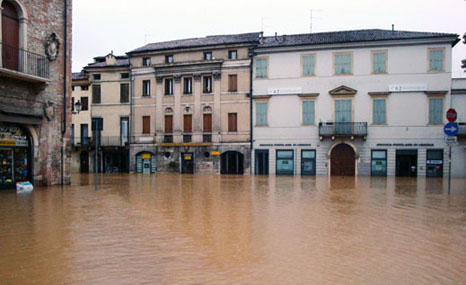 Severe flooding in Germany and central Europe was the most expensive natural catastrophe of 2013, according to a new report from reinsurer Munich Re, much more so than Supertyphoon Haiyan which killed 6,000 and devastated the Philippines.

Munich Re said economic losses in 2013 from natural disasters – which the World Bank thinks will rise sharply because of climate change – were relatively moderate compared with the recent average.

But the Germany-based reinsurer said that the large loss of life and crops from Supertyphoon Haiyan underlined the need for better safeguards against storms and government-backed insurance schemes.

“Events like those in the Philippines show the urgent need for more to be done in developing and emerging countries to protect people better,” said Torsten Jeworrek, Munich Re Board member responsible for the company’s global reinsurance business.

Jeworrek said these measures should include stable buildings, better protection against extreme weather events and state-backed insurance schemes to provide those affected with financial assistance after a disaster.

The report published by Munich Re yesterday underlines the economic gulf between the richest countries and developing nations, and their ability to insure against damage from extreme weather events.

Summer floods in Germany and central Europe was the costliest event in terms of overall economic damage, costing $15.2bn, while insured losses came to $3bn.

A freak storm, also in Germany, was the largest single insured loss of last year as tennis-ball sized hailstones smashed into cars, solar panels and buildings.

The overall economic loss from Supertyphoon Haiyan totalled some US$ 10bn, equivalent to around 5% of the Philippinesʼ annual economic output, but owing to the very low insurance penetration the insured loss will probably only be in the mid three-digit million range, Munich Re said.

Munich Re’s report made no mention of the future insurance costs resulting from climate change, but it did note that some of the events expected to worsen because of a warming climate failed to materialise last year.

For example, the Atlantic hurricane season was the quietest since 1982.

Some scientists predict that warming oceans will lead to more powerful storms, and the Polar freeze that has paralysed much of North America in the past week could be the result of melting icecaps, a view strongly disputed by climate change sceptics.

Munich Re’s Peter Hoppe told RTCC at UN climate talks in Warsaw that its data showed the world has experienced three times as many extreme weather events occured compared with 30 years ago.

At the same talks, the World Bank said global economic losses caused by extreme weather events have risen to nearly $200 billion a year over the last decade, up fourfold from the 1980s and would increase further as climate change worsens.