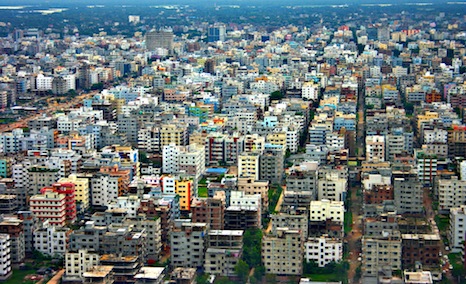 Dhaka is the city with the highest population growth in the world (Source: Flickr/Sandeep Menon)

A summit of the world’s biggest cities will get underway in South Africa today, where mayors will discuss urban solutions to climate change.

The C40 meeting will bring together local leaders from across the world, providing a forum to exchange ideas on how cities can become efficient and resilient in the face of a warming planet.

C40 was created in 2005 by former London mayor Ken Livingstone to help the leaders spearheading action at a local level share policy and technology innovations with their counterparts across the globe.

Starting as a coalition of 18 megacities, it has now expanded to encompass 58 cities across five continents, including Addis Ababa, Mumbai, Caracas, Toronto and Milan. It represents 1 in 12 people worldwide, and 18% of the global GDP.

The three-day summit, launching today in Johannesburg, is the fifth biennial meeting of the mayors.

While the cogs of national and international politics turn slowly when it comes to climate change, cities are already finding and implementing solutions.

For Leo Johnson, an analyst at PwC and brother of London mayor Boris Johnson, it is these vast yet manageable collections of humanity that are driving change in sustainable thinking.

“It’s not just that you’ve got urbanisation as an emerging dominant trend,” he told RTCC. “You’ve got cities where you’ve got a different model of leadership and of government that allows you to break through the gridlock of national and international negotiations.

“Cities are where you can get stuff done, so anything like C40 that’s about spreading best practise and seeing how cities can collaborate and do stuff together, you betcha.”

Rapid urbanisation means that the number of city dwellers is at an all-time high of about 3.5 billion. The UN projects that this will nearly double in the next 30 to 40 years. Almost all of this growth will be in developing countries.

Cities are on the frontline when it comes to climate change, both in terms of feelings its impacts and developing solutions. Extreme weather events are most expensive when they hit highly built up areas, due to the damage that they cause. According to a Munich Re report, severe flooding in Germany and central Europe was the most expensive natural disaster in 2013.

“If a flood hits, a typhoons strikes, a disaster occurs, cities are always the first responders,” said Katrina Borromeo, who works with ICLEI, a network of towns and cities that works to improve environmental initiatives. “They are implementing decisions impacting on climate change every single day.”

The International Energy Agency said in 2008 that cities are responsible for about 70% of the world’s carbon dioxide emissions, despite only housing half of the world’s population.

There is a growing recognition at an international level of the role that cities play in implementing immediate solutions to climate change, as UN diplomats struggle to seal the deal on a 2015 treaty that will commit national governments to reduce their carbon emissions.

While in office as mayor, Bloomberg sought to make New York a model of sustainability. After Hurricane Sandy, he proposed a $20 billion package to made the city more resilient to extreme weather. It is expected that his adoption into the UN will reenergise attempts at city level to mobilise action and raise the political will to tackle climate change.

UN climate chief Christiana Figueres is to attend this year’s C40 summit, where she will give a keynote speech on Wednesday.

She says: “As we approach 2015, now is the time for city leaders to interact more effectively with national governments, to ensure coherence in the design, and collaboration in the implementation of climate change policies and measures.”

But it will require something of an overhaul in the way cities are governed if they are to become the models of sustainability that the C40 mayors envisage, says Johnson. Devolved power, which places citizens at the heart of development, is what will enable creativity to flourish, he says.

“This is the era of the massive small. Big is dead. It’s about putting into the hands of people the power to adapt, the power to be resilient,” he says.

“It’s not about massive concrete infrastructure. It’s not about shipping water across China from one patch that’s got water temporarily to another that lacks it. It’s about enabling local resilience.”

Such instances of small-scale action are already afoot. In Seoul, South Korea, a voluntary No Driving Day programme has decreased traffic by 3.7%, improving air quality across the city. Participants in the scheme receive rewards if they keep their car off the road for one day a week, which is monitored through a radio tagging system.

In Berlin, energy efficiency upgrades to buildings have saved €10.5 million, or 26% of usual energy costs.

“What we want are not smart cities but smart citizens,” says Johnson. “The cities that will thrive will be the ones that will unleash the capacity of their citizens the best, that attract the most capable and creative citizens and then unleash their capacities.

“The job of a mayor, of a great city leader, is to do that. It’s the enabling state, it’s the government as platform. It’s that which will create this extraordinary flourishing bottom-up city.”