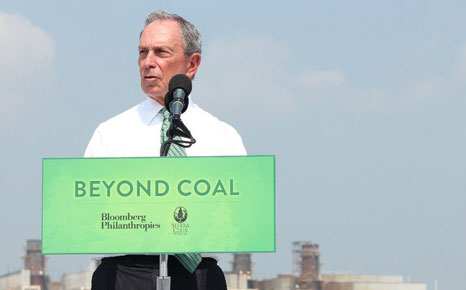 Pacific Island states and low lying countries are often seen as living on the frontline of climate change.

But increasingly there is one city far from these regions that is being held up as a case-study in ambitious climate mitigation and adaptation policymaking: New York.

Hurricane Sandy drove home the destructive power of nature to residents in 2012, generating estimated economic losses of US$ 18 billion.

This year its Mayor Michael Bloomberg has announced a raft of ambitious bills to drive low carbon and resilient development.

“Cities are on the frontline because federal, national and international organisations aren’t doing anything,” he said.

“They either deny that the world is changing or they say that it’s not changing so fast that we should do anything about it but all of the scientific information that we have and the empirical evidence that we see…these are things that somebody’s got to worry about.”

It’s significant because given its status as the UN’s capital city, these efforts can feed into the minds of world leaders and diplomats who cascade through its streets faster than the Hudson River.

This week New York hosts the UN General Assembly. The Syria crisis looms over the summit, but there are also key negotiations relating to the future of the Millennium Development Goals and the Sustainable Development Goals scheduled to launch in 2015.

Yesterday Ban Ki Moon announced the city will host a world leaders climate summit in 2014, one of the last major meetings ahead of the 2015 UN climate conference in Paris, where countries have agreed to sign a new emissions reduction deal.

This year is also the fifth anniversary of Climate Week NYC, the global summit for government, business and thought-leaders focused on driving the transition to a low carbon economy.

It attracts the world’s leading thought-leaders and politicians, who this week were queuing up to warn of the consequences of ignoring rising levels of carbon dioxide in the atmosphere.

“After this panel assessment this week, there will no longer be any serious doubt in the minds of serious people that this is a serious problem,” former UK Prime Minister Tony Blair said at an event on Monday.

World Bank chief Jim Yong Kim added: “We have to stop with these silly arguments and move forward on thinking about what we are going to do,” citing studies by his organisation that predict warming of +4C by 2100.

Against the backdrop of President Obama’s renewed climate commitment and the imminent publication of the IPCC Fifth Assessment Report, Climate Week events will present new evidence of the security, leadership and economic opportunities in the Clean Revolution: a catalyst for a smarter, better, more prosperous world.

And it’s clear New York intends to ride the crest of this wave of new investment.

Sandy left much of Manhattan in darkness, wiping out its iconic skyline in a few hours, and turning its grid of roads into a modern-day Venice.

Future indicators worry policymakers like Bloomberg. By 2030, average temperatures could rise by as many as three degrees fahrenheit in NYC. That’s more than other regions of the country because its huge array of buildings absorb and retains heat.

This can cause temperatures in the city to be seven degrees fahrenheit warmer than the surrounding suburbs.

The city’s sea levels, which hug 520 miles of coastline, have already risen a foot in the last 100 years and are projected to rise by up to 10 inches more in the next two decades.

“I think it never hurts to have new programmes and arrange awareness – because awareness is a key to achieving any meaningful energy efficiency goals. Awareness about this will bring results.”

New York City already has one of the lowest per capita greenhouse gas emissions levels among major global cities, one-third the US average, due to its density and reliance on mass transit.

Bloomberg has also launched a comprehensive effort to understand our climate risks and take concrete actions to reduce the vulnerabilities we identify.

“What we need in New York City is to have the state and federal governments have some backbone,” Bloomberg said.

“We need them to pass and enforce laws much more than we need financial aid from them. Unfortunately, governments think that money is everything, but unfortunately sometimes too much money is more detrimental than too little money.”