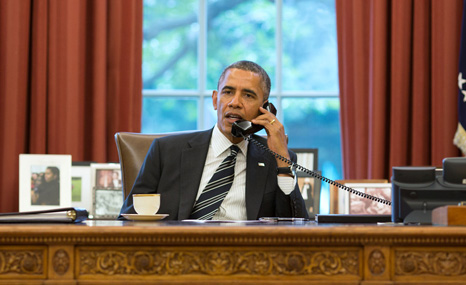 Based on interviews with 830 people, the Yale Project on Climate Communication researchers say two in three of those taking part believe climate change is happening, while over half are worried about its affects.

“Four in ten say people around the world are being harmed right now by climate change (39%) and one in three (34%) say global warming is currently harming people in the United States,” the report says.

It adds the overall level of US citizens who believe global warming is taking place is unchanged at around 63%.

A letter from McConnell obtained by the National Journal paper claims the EPA’s proposed emission standards have been applied in an “unusual” manner, saying it’s the “latest salvo against the coal industry”.

The EPA rules are a major part of the Obama National Action Plan, aimed at ensuring the USA can meet its international emissions reduction target of 17% on 2005 levels by 2020.

A recent report from the State Department warned the US is unlikely to meet its current international emission obligations unless this plan is enacted.

The stark divisions between the Democrat and Republican parties over the USA’s climate strategy were evident at a testing Review of the President’s Climate Action Plan in the Senate on Thursday afternoon.

“I had 700 scientists eight years ago … totally refuting the assertion that is being made on which we are paying hundreds of billions of dollars,” he said. His colleague Senator Jeff Sessions labelled the climate warming gas carbon dioxide “plant food”.

Democrat Senator Sheldon Whitehouse, a strong support of the new regulations, dismissed claims by his colleagues global warming was not happening. “Houses are falling into the ocean … I am not going to ignore that to save coal and oil jobs. The suggestion climate change has stopped flies in the face of realistic evidence,” he said.

In one of her rare interventions, McCarthy told the panel the EPA was committed to carbon cutting measures, adding: “Climate change is happening and I’ve been worried for a while.”

President Obama’s commitment to his climate agenda is set to come under added scrutiny in 11 days when he delivers his annual ‘State of the Union’ speech.

Last January he promised to take “meaningful action”, following this up with a comprehensive plan to cut carbon pollution and boost clean energy sources.

The US is expected to reveal its carbon reduction commitments for a proposed 2015 UN climate deal in the first quarter of next year.

Recent data from the US Energy Information Administration suggests these efforts may need to be increased, as US energy sector emissions in 2013 rose for the first time since 2010, due to rising costs of gas and a leap in coal use.

This week the US National Oceanic and Atmospheric Administration (NOAA) announced that 2013 had been “warmer and wetter than average”, and the 37th warmest year since 1885.

Next week NOAA and US Space Agency NASA are set to release new data on global temperatures and climate change. Currently 63% of California is in reporting extreme drought, with fierce forest fires raging around Los Angeles.