US and China outline ‘five actions’ to combat climate change 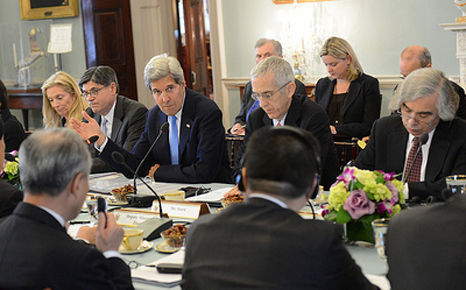 China and the USA, the world’s two largest emitters of greenhouse gases, have agreed five new actions aimed at cutting pollution from vehicles and power stations.

The US-China climate change working group, set up in April, will work with the private sector and non-governmental organisations to develop these plans by October.

RTCC understands this is the first wave of announcements – with more expected over the coming years. As yet it is unclear what new financing, regulatory standards, and specific benchmarks are being set to measure progress.

“When we make a decision, it has ripple effects that reach far beyond both of our borders,” Secretary of State John Kerry told a press conference, adding: “How will we curb climate change, how will we pioneer new energy technology which is in fact the response to climate change? Energy policy is the solution to climate change.”

Kerry added that climate change would be top of the agenda at the latest ‘dialogue’, the fifth since the stream of talks was opened. Last month President Barack Obama and China Premier Xi Jingping agreed to work together on cutting the production of super-warming fridge gases.

Lead US climate negotiator Todd Stern told reporters the announcements were unlikely to be a game-changer at UN negotiations, but stressed cooperation could add momentum to talks which aim to generate a global emissions deal in 2015, replacing the Kyoto Protocol.

“There is no question that China and United States together are the two most important players,” he said. “So anytime the U.S. and China cooperate and find a means of cooperating and acting together, I think it has a very positive overall impact.”

More details are expected to emerge on Thursday and Friday, but US climate campaigners appear confident that this initiative – largely driven by John Kerry – could herald a new era of climate ambition in the US, following on from President Obama’s announcement of a national action plan.

Alden Meyer from the US-based Union of Concerned Scientists told RTCC proposals to implement ‘several large-scale, integrated CCUS projects in both countries’ was an “intriguing aspect” of the latest announcement

“It will be interesting to see if they are talking about entirely new projects, or just moving forward with projects that are underway or planned,” he said.

With the next round of international emission talks four months away, UN climate chief Christiana Figueres welcomed the news.

“Concrete policies and actions now to prevent further greenhouse gas emissions and create clean, sustainable economies are the single biggest contribution countries can make to firm up the foundations for a new international climate agreement,” she said.

“For that reason, this new, wide-ranging US-China cooperation to cut emissions from major polluting sources and to boost energy efficiency and renewable energy is both welcome and important.”