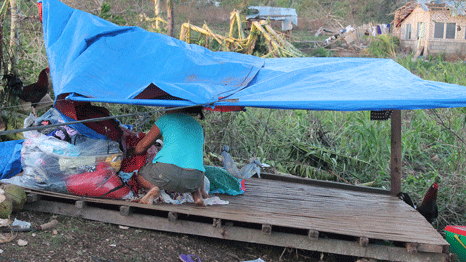 Less than a quarter of the funds needed to provide shelter to families in the Philippines who lost their homes as a result of Supertyphoon Haiyan have been provided says the UN.

Despite a strong international push to pool funds to help with the relief effort, so far it has only provided  22.5% of the money requested to provide emergency shelter. The money is being used to replace the 1,127,041 houses that were damaged when the tropical storm hit the islands in November last year.

It is a figure that is “at odds” with the huge need for shelter, says a new UN report, which was released this week by its Office for the Coordination of Humanitarian affairs (OCHA). According to government figures, 548,793 houses were completely destroyed by the storm.

The Typhoon Haiyan Action plan, which coordinates the funds raised for the relief effort by different organisations across the world, has requested US$ 788 million to provide adequate aid across all sectors of the Philippines.

The average success rate for fundraising across the different areas is 41.6%. One of the most successful efforts has been for food security and agricultural needs, where 55% of the funds asked for have been raised.

Alongside the UN, humanitarian groups who are still working on the relief effort in the Philippines warn that the shelter being provided is poor quality, and will not provide protection against any future disasters.

Anna Ridout, who is currently working with Oxfam in Tacloban, says that temporary bunkhouses provided by the Filipino government may be “well intentioned”, but have led to serious concerns about the level of protection that they provide.

“Some bunkhouses in Guiuan lack water and sanitation facilities, electricity or other lighting, and are in a no-build zone,” she told RTCC.

“Bunkhouses seen by Oxfam in Samar offered very limited living space. Some families say they are worried about the close proximity of some bunkhouses to the sea. Others are located next to busy roads or bus stations, raising risks for bunkhouse residents’ personal safety – particularly for women and girls.”

The UN says that one of the bunkhouses in Lawaan, Eastern Samar, is on swampy land and that two cases of dengue have been reported – a disease which has been on the rise in the country since the typhoon hit.

The need for a longer term solution is exacerbated by recent heavy rain and wind that have battered the country. For the four million people who have lost their homes, building high quality housing that would allow them to withstand similar future disasters is vital.

In the Eastern Samar province, many are still living in tents and tarpaulins. Some of these were torn in the recent heavy rains and need to be replaced.

The World Meteorological Association warned after the typhoon that coastal communities would become increasingly vulnerable to such events as climate change causes the sea level to rise. In some parts, the storm surges caused by Haiyan reached seven metres high.

The government needs to ensure that reconstruction plans help to reduce the underlying poverty in the Philippines that increases and perpetuates the risks encountered when a disaster hits, says Ridout.

“As the long road to recovery begins, the Philippines authorities and the world must increase efforts to reduce the growing risk of climate-related disasters that the Philippines and other countries will face,” she said.