US Secretary of State promises extra funds to Philippines, which he says looks like a ‘war zone’ in wake of Typhoon Haiyan 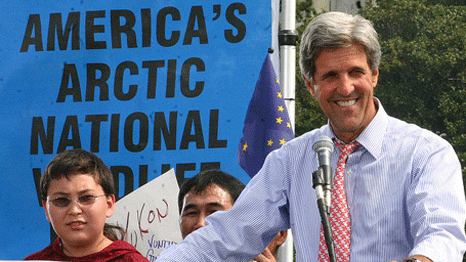 US Secretary of State John Kerry announced today that the US will provide an additional US$ 24.6million in aid to the Philippines, where residents are still reeling from the impacts of Typhoon Haiyan.

Kerry is currently visiting Tacloban, the city which suffered the most damage when the storm swept through the Philippines last month. The money comes in addition to the $62million already donated by the US.

“Last month’s typhoon broke the world’s heart, but what is certain is it didn’t break the spirit of the people here,” said Kerry, speaking to reporters assembled in the capital.

“The resilience, the courage, the determination to rebuild and to remake what was inspires all of us.”

The money will go towards ensuring residents and relief workers have immediate access to clean water, sanitation and hygiene services, along with providing food and temporary shelter.

Relief efforts are already well underway in the Philippines, with NGOs, the UN and the general public working together to provide the funds to rebuild the country and help those affected to re-establish their livelihoods. Kerry said that he was committed to creating a region “even better and stronger and safer” that it had been before, and referred to discussions that this could be an opportunity to build a new, green community.

The Agency for International Development has also signed a deal with Proctor & Gamble and Coca-Cola that will help more than 2,000 convenience stores to repair and restock their shops.

On his visit to Vietnam yesterday, Kerry committed another $17million towards helping the country’s most vulnerable communities adapt to climate change.

Kerry said that it was impossible to be in Tacloban and not feel the “dramatic impact” of what has taken place. “It looks like a war zone in every respect – and in many ways, for a lot of people, it is,” he said. Over 6000 people died in the typhoon, with 1800 still missing. An additional 27,000 were wounded.

“No words can do justice to the level of destruction that you see: the entire community leveled, water that goes up to the second story of an airport tower over there, all of this covered by water; the destruction of the trees all the way up the mountains; the leveling of homes and the taking of life.

“This is a devastation that is unlike anything I’ve seen at this kind of scale. It’s many tornadoes, that I have seen in America, wrapped into one.”

He added that, while no single event can be attributed to climate change, it is certain that rising temperatures will lead to longer and more unpredictable monsoon seasons, which will in turn lead to more extreme weather events.

Such disasters are a call to action on climate change, which Obama’s government is tackling with increasing determination. It is, he said “a reminder of our responsibility to act to protect the future.”