Amid the rubble, communities are already learning how to build a country that is more resilient to climate change 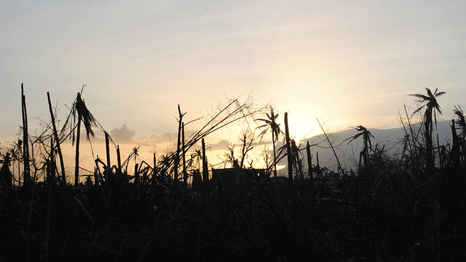 The first pictures to emerge from the Philippines following Super Typhoon Haiyan showed scenes of an almost apocalyptic nature. The storm raged across towns and provinces, flattening homes and destroying lives and livelihoods in its wake.

One month on and the scenes of destruction in the Philippines continue to look insurmountable. Bodies are still being recovered, but new problems are beginning to vie for attention. The loss of trees across the islands mean there is no shelter from the heat that has followed the winds. Mosquitoes are spawning, and the ocean and beaches are littered with debris.

But the country will not stay down forever, which just leaves the problem of how to go about rebuilding it – and where to start. Although no single disaster can be directly attributed to climate change, scientists have said that typhoons are set to become intense as the temperatures rise, and the cities and lives that will be rebuilt over the coming years must be well equipped.

“We need visionaries at this point,” says Yeb Sano, the Filipino Climate Change Commissioner, who last month gained the world’s attention when he fasted for two weeks during the UN’s climate talks in protest at the lack of meaningful action to tackle global warming and its impacts.

These visionaries, he says, not only need to rebuild the cities, but create new urban centres that will be better prepared for when the next storm hits.

There are opportunities among the rubble, and the rehabilitation effort needs to pick them out, he says, by crafting a development plan that will not only improve the resilience of the Philippines, but serve as a model for other countries who may come to face similar challenges as climate change causes extreme weather events such as typhoons to become more intense, and maybe more frequent.

New and better cities might mean, for example, that food is produced much closer to where it is consumed, so that disasters do not cut off the supply so easily.

Following the storm, residents of the fishing towns across the Philippines started to starve. The typhoon wiped out over 100,000 of the small wooden outrigger boats that the artisanal fishermen use to collect in their livelihood.

This has proven to be an opportunity for some of the visionaries who are working towards building a better Philippines.

Groups and individuals are restoring fishing communities not by simply giving them back their boats, but by providing them with the material and training they need to build their own new-and-improved fibreglass versions.

WWF-Philippines has already raised enough money to provide the materials and training to build about 1,800 fibreglass boats.

After the typhoon, many fisherman were saying that they didn’t need relief – all they required was a boat, and they would be able to get along with feeding their families and rebuilding their lives.

“That’s the kind of attitude that we want to promote, people who are willing to just pick themselves up by their bootstraps and make things happen,” says Lory Tan, vice chairman of WWF-Philippines.

“You’re not simply giving them something, you’re sharing a skill – a skill that they will then have forever.”

They plan to distribute kits containing the moulds for the boats, along with resin, fibreglass and the tools required to construct the boat. Volunteer trainers will provide the knowledge of how to work the materials and build the final product.

“One of the things we hope to achieve is to leave a mould behind in every village that we work in, so they can continue to build fibreglass boats for as long as they need them, even after the fishermen already have boats.”

These fibreglass reincarnations of the old wooden outriggers have a number of advantages, he explains, on top of their basic hardiness.

A designer has been working on the hydrodynamics of the new boats, giving them a more robust structure so that they are “virtually unsinkable” says Tan. He adds that moving away from wood as the primary material make sense, as the independent problem of the Philippines’ now dire forestry situation makes fibreglass a much more sustainable option.

“Previously, if they lost their boats they would have to find wood again to build their boats and there’s no more wood – there are virtually no forests left. The forestry situation in the Philippines is so bad that it really makes no sense for us to encourage the reconstruction of wooden boats, which is why we thought of providing fibreglass.”

In other cases, the solution is not quite so clear cut, and requires an upheaval of the economic and social conditions in the country, so that they are better equipped for when disaster strikes.

A mechanism to deal with the losses and damages caused by extreme weather events like the one just witnessed in the Philippines is being developed following the recent UN climate talks in Warsaw. If it goes to plan, this will provide the tools and the knowledge base needed to help clean up after these disasters.

The areas affected by Haiyan were already some of the poorest regions in the Philippines, says Sano, and even before the typhoon hit many were already living on less than a dollar a day.

“These are the same conditions that made them really vulnerable to such an event. I think aid must pursue sustainable livelihoods, and not just provide band aid solutions,” he says. For instance, in such an agricultural area, money would be well spent on helping people to rebuild their farms.

Coconut palms, which account for nearly half of the country’s agricultural exports, have been flattened by the storm.

Sven Harmeling, a climate change expert at CARE International, said: “The damage means their whole income source is wiped away and now the question is what to do about it. It’s possible to plant seedlings, but this takes years of time.

“I think there are other examples where the whole economic system locally is interrupted, where people are driven into poverty because they’re losing their harvest in addition to losing a wealth of material belongings, and that’s a situation which can run such areas into more permanent poverty.” 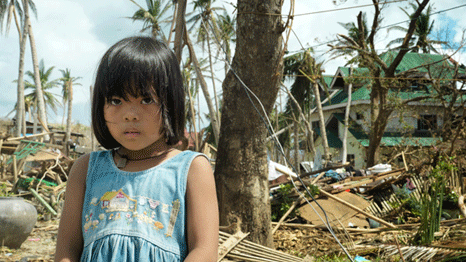 In this case, there is no question of upgrading these trees with fibreglass versions – the solution is necessarily more complicated. Harmeling says that it requires the diversification of the economy, which has long been recognised as a means to deal with climate impacts.

“How exactly this could be supported is a difficult question,” he says. “You make yourself more resilient if your economy is based on more than one factor. Then you suffer less hard when there’s such an extreme event.”

Talking about markets and diversifying the economy may not seem like an immediate priority when the country is still reeling from the immediate impacts. As Sano says, “Right now it’s a shambles. I’m clueless. I have no experience whatsoever in rebuilding an entire city.”

But if the visionaries – the boat builders, the architects, the economists and others – come together with help from the rest of the world, then the Filipino community has a chance to build from the rubble a country that is more prepared for climate change than it was before.

“This should always be taken as an opportunity to make that happen,” says Sano. “As long as that opportunity is there, we must do that.”