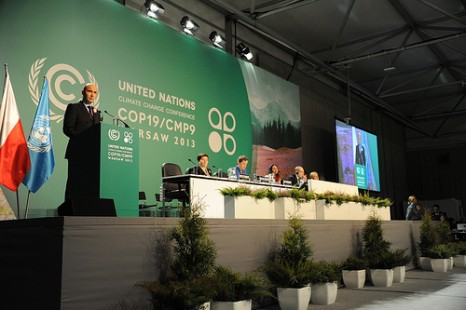 The fate of the Philippines dominated the first day of UN climate talks in Warsaw, as the country started to count the human cost of one of the most destructive typhoons on record.

The Polish Government paid its own respects to the victims of Typhoon Haiyan by handing delegates white flowers, and the main plenary session observed a three minute silence.

Initial reports suggest more than 10,000 people died in the east coast city of Tacloban. In an emotional speech the country’s lead climate change envoy said he would fast until he saw a sign of real ambition at the negotiations.

Yeb Sano said the violence of the tropical storm demonstrated the need for a climate compensation mechanism, which could help countries affected by extreme weather events.

“Developed country emissions reductions targets are dangerously low and must be raised immediately, but even if they were in line with the demand of reducing 40-50% below 1990 levels, we would still have locked-in climate change and would still need to address the issue of loss and damage,” he said.

Following Sano’s intervention, three groups representing just over half of the countries involved in the 19th Conference of the Parties to the UN Convention on Climate Change issued a call for immediate talks on the development of a loss and damage mechanism.

The G77 + China, Least Developed Countries and Alliance of Small Island States said this was now a priority for their members in the wake of the Philippines disaster.

“It’s unacceptable that some continue to sideline this issue, or fob it off as a ‘research agenda’ item,” said G77 lead negotiator Juan Hoffmaister.

“We do need more knowledge, but above all we need more action and political commitment to deal with the concerns of the world’s most vulnerable people.”

Developed nations, who fear being landed with bills running into hundreds of billions, indicated they were willing to discuss a ‘mechanism’, but would not be drawn on what its powers could be.

The USA’s deputy climate negotiator Trigg Talley told a press conference there were “technical and political” challenges to accepting any form of compensation scheme, suggesting they would consider a process that “takes advantage of current institutional infrastructure and allows countries to understand how to minimise risks linked to loss and damage.”

EU climate envoy Juergen Lefevere said loss and damage is a “key priority” but suggested a new mechanism was not an effective answer.

“It is not about reinventing the wheel and inventing a new body to help the Philippines,” he said, adding that the EU had already pledged €3m at the weekend, with more in the pipeline.

There are fears among some parties that a heavy focus on climate compensation in Warsaw could come at the expense of other aims, notably agreeing financial targets and a roadmap for a 2015 climate deal.

Brazil’s lead diplomat in Warsaw Ambassador José Antonio Marcondes de Carvalho warned that any new mechanism would be an acknowledgement that adaptation and carbon cutting efforts had failed.

“We were all very moved by the statement from our colleague in the Philippines… but it comes as a very strong and timely reminder for countries to act immediately and take decisive action to curb emissions and commit to adaptation,” he said.

UN climate chief Christiana Figueres would not comment on the progress of loss and damage talks, saying it was a matter for national delegations. But she urged countries to clarify the levels of finance available to drive low carbon development.

“We must deliver an effective path to pre-2020 ambition, and develop further clarity for elements of the new agreement that will shape the post-2020 global climate, economic and development agendas,” she said.

Japan and Sweden are set to reveal new climate finance pledges this week, but there remains a substantial gap between what developing countries say they need to adapt to climate change and what has been delivered.

According to a report published by Oxfam on Monday, developed country funding pledges are US$ 24 billion lower than they were between 2010-2012.

Just US$ 7.6 billion of unconditional finance may have been provided in 2013, raising doubts over how rich nations can meet their promise of providing US$ 100 billion a year by 2020.

Brazil’s de Carvalho said that unless developed countries “live up to their word” and deliver on their commitments it will be impossible for the developing world to plan for the future.

“I would very much like to have that answer, this is what we expect to be able to see where we are going and how it will shape up,” he said.