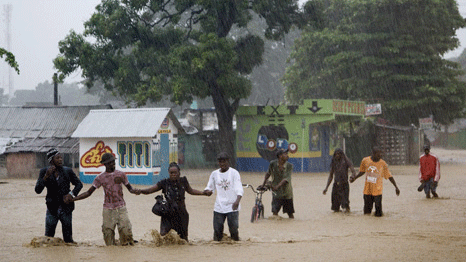 The UN climate negotiations in Warsaw witnessed a real victory for developing states with the establishment of a new mechanism on loss and damage. But now, say experts, the work really begins.

The Warsaw International Mechanism for Loss and Damage is the result of 20 years of persuasion from nations including the Small Islands States and 48 hours of intensive negotiations in Poland’s National Stadium.

On paper it does not appear to promise much. The text outlines how it will “address loss and damage associated with impacts of climate change, including extreme events and slow onset events, in developing countries that are particularly vulnerable to the adverse effects of climate change.”But as with many UN agreements, clever language and compromise means it remains more a concept than anything substantial. And for now it will remain part of UN efforts to develop strategies to adapt to extreme weather, rather than a separate entity.

The executive committee of the new body will convene in March 2014, and ActionAid’s Harjeet Singh, who played a central role in Warsaw in supporting the campaign, says it’s vital this meeting can demonstrate progress.

In 2016 the ‘mechanism’ will be reviewed by UN parties. “By then I hope that there will be a great deal of work to demonstrate how loss and damage goes beyond adaptation,” Singh says.

For Saleemul Huq, who works on loss and damage at the International Institute for Environment and Development, the outcome represents a big step forward for developing countries.

“In my view you should look at the headline of the text, rather than look at the details of the text, which are incomprehensible to anybody who doesn’t follow this like I do,” he told RTCC.

“What we have is a new international mechanism on loss and damage. That’s it: it doesn’t mention adaptation. It’s a loss and damage mechanism, and it uses the word ‘mechanism’, not program or taskforce. The headline really gives us what we need.”

Developed nations called for loss and damage to be included under the existing adaptation strand of the discussions, where countries build up their resilience to future problems, rather than learn how to recover from present ones.

The USA objected to the notion of a loss and damage mechanism because it is likely to lead to them having to accept a portion of the blame – and, in the future, the associated bill – for the devastating impacts that a warming world will have on some of the world’s most vulnerable people.

These problems include rising sea levels, loss of livelihoods and extreme weather events. They are problems that are now unavoidable as CO2 in the atmosphere accumulates.

Rene Orellana was head of the Bolivian delegation, which fought hard for loss and damage within the G77 group at Warsaw. He told RTCC that financial support is likely to be the main challenge the mechanism faces.

“We have all the functions completed. We have to work now on making it operative,” he said.

Huq says that the process was started, not finished, in Warsaw, but that what they achieved will allow them to take the issue forward.

He adds that there is a lot of research that needs to be done that previously would never have received funding from developed countries, who backed away from the taboo subject.

“Now we can begin it in a lot more consensual and less confrontational manner and I think that’s a big achievement of Warsaw. We have consensus and agreement on how to take this forward, rather than tension and disagreement between two blocs of countries.”