Flagship green investment bank will be ‘unveiled’ in South Korea, but cash machines expected to be empty till late 2014 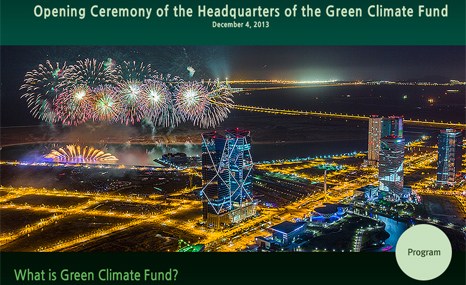 The Green Climate Fund will be hosted in the G-Tower in Songdo (Pic: GCF)

The headquarters of the UN’s Green Climate Fund will be officially opened tomorrow in Songdo, South Korea, although it is not expected to be fully operational or receive funding until the second quarter of 2014.

Billed as the bank that will unlock financial support for low carbon projects around the world, the level of backing given to the GCF from donor countries will come under heavy scrutiny in the next 12 months.

A statement from the board published in October indicates that the Fund is likely to start gathering together contributions in August 2014, three months after procedures for accepting funds are signed off at a meeting in May.

South Korea has set aside US$40 million to support administration costs, but no other funds have been promised so far. An official at the GCF’s offices in Bonn told RTCC concern over a lack of pledges was “misleading” as “nothing had been asked for”.

Wider concerns over a finance drought and how the GCF will be capitalized were evident at the recent round of UN climate negotiations in Warsaw.

These ended with a call for countries to deliver “a significant scale” of funding “that reflects the needs and challenges of developing countries in addressing climate change”.

Philippines negotiator Athena Ballesteros told RTCC the prospects of a global emissions reduction treaty set to be signed in Paris in 2015 will hinge on the levels of finance available for green investments.

“For us to have a good starting point for 2015 you will have to assure both middle income, large economies and most vulnerable countries that there is that scale of financing that will be made available, otherwise it will be very difficult to demand of countries to do more,” she said.

There also remain questions over what the GCF is really for. Ari Huhtala from the Climate and Development Knowledge Network (CDKN) told RTCC it’s vital the board present a clear business plan after a meeting scheduled for February 2014.

“The actual business model needs to be determined – whether it will be a retailing or wholesale fund…is it the fund of funds or is it a fund to which countries go directly?” he said.

Huhtala added that its initial dependence on Overseas Development Aid from individual countries is a concern at a time of economic uncertainty. Other revenue streams including funds from aviation, maritime and an OPEC tax have been discussed, but nothing has been agreed.

Nicholas Stern, one of the world’s leading climate change economists, told RTCC in Warsaw greater policy certainty from governments could ensure the private sector fills the gap, but only if leaders stop “vacillating” about their growth strategies.

“That is a killer…governments have to recognise that the only serious long term or short term future lies in the transition to the low carbon economy. That is the growth story of the future: if they set clear policies in place … that’s where the finance will flow.”

“Before we fixate on US$100 billion, let’s look at the overall investment challenge, and it’s pushing a trillion dollars a year in climate oriented investments, with more than half of that in developing countries,” he added.