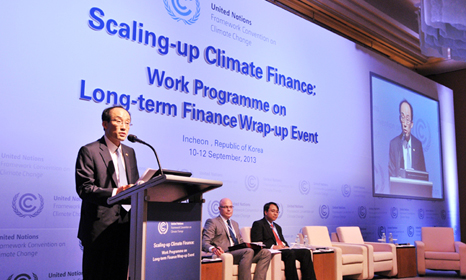 South Korea will set aside US$40 million to ensure developing countries have the capacity to use the UN-backed Green Climate Fund.

Kyung-Ho Choo, South Korea’s vice minister of strategy and finance, made the announcement at UN long-term finance talks that started today in Incheon.

Ensuring developing countries can access the GCF is viewed as critical if the flagship project is to effectively channel funds from the global north to south.

Currently it is unclear what guarantees or commitments the fund will need from countries, or what safeguards private investors will require.

Choo also called on UN envoys to take ‘immediate action’ on clarifying long term finance pledges to ensure the fund can start operating by the end of 2014.

“In order for the GCF to meet such expectation, and to address climate change swiftly and effectively, we should agree on the long term finance issues quickly,” he said.

The Korean city of Songdo will host the GCF, which is part of a wider UN goal to generate US$100 billion for low carbon investment by 2020.

Governments agreed to set up the GCF in 2010, but weak economic growth and a lack of confidence in the fund’s structures have undermined fundraising efforts.

“They’ll be putting at least 50% of their resources towards climate activities, which is at least €2 billion a year in the coming years,” he said.

He added: “It’s very difficult to pull out upfront how much support for adaptation will be provided. It is so closely linked to other development priorities.”

The UN also revealed that the US will report on its 2013 climate finance numbers at the forthcoming COP19 summit in Warsaw this November.

It is currently unclear what future US finance pledges could look like. The US contributed roughly $7.5 billion to global $30 billion climate finance flows between 2010-2012.

President Obama’s Climate Action Plan did not guarantee further funding, saying the administration intended to: “build on this progress as well as focus our efforts on combining our public resources with smart policies to mobilize much larger flows of private investment in low-emissions and climate resilient infrastructure.”