Climate mitigation and adaptation funds worth US$ 600 billion could be raised by targeting monies paid to the coal, oil and gas sectors 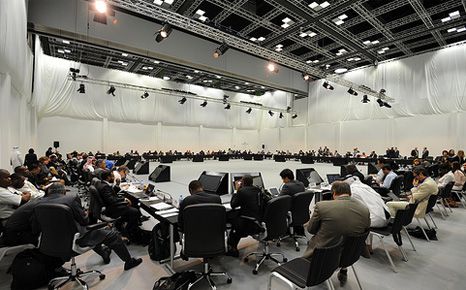 Long Term Climate Finance (LTF) talks under the UN will continue throughout the summer and autumn (Pic: UNFCCC)

UN climate finance talks in Manila ended on Wednesday with no new pledges but showed signs of progress in identifying new sources of funding, such as a levy on fossil fuels.

The two-day meeting marked the latest attempt by countries to  establish how developed countries can meet their pledge to provide $100 billion a year by 2020 to enable poorer states to cut pollution and build a climate resilient infrastructure.

As yet it is unclear where that money will come from, but delegates attending the meeting told RTCC discussions were positive, despite a lack of clarity on how and if that money can be delivered.

“This workshop has confirmed there is money out there, and there are potential sources. The question is do governments have political will to unlock this,” said Athena Ballesteros from the World Resource Institute

“One of the most exciting ideas is fossil fuel subsidies in advanced economies, which could raise US $600 billion.

“The second is that there are an unbelievable number of initiatives across countries to create the right policy framework towards mobilisation of domestic resources and effective deployment of climate finance.”

Under the UN climate convention, rich nations are bound to assist poorer countries in their transition to a low carbon economy.

From 2010-2012 US$30 billion is said to have been delivered to the developing world as part of a Fast Start Finance (FSF) initiative.

At UN talks in Doha at the end of 2012 the UK, Germany, Sweden, France and Denmark offered €6.85 billion in finance for the post FSF era.

Japan and the USA also offer funding through their own state-run schemes, but many developing nation representatives say there is a lack of clarity over the conditions attached to many transfers of money.

One delegate at the meeting, speaking on condition of anonymity, said the lack of progress on identifying levels of support was frustrating for many participants.

“The conversation on pathways was disappointing because none of the donors were willing to come forward with an ambitious target or set of mechanisms that let people believe they will get to scale,” they told RTCC.

“There is some desire to have some long term financing target, and today countries were pushed hard to deliver ‘pathways’.

“If there’s one message it is that there is so much ambition from developing countries but there is a big vacuum in terms of where will the money come from, and where are the resources to support it?”

A presentation from Dr Mattia Romani, Deputy Director General at the Global Green Growth Institute in Seoul outlined how a carbon tax and the channelling of fossil fuel royalties in developed countries could generate US$ 650 billion a year.

Similar plans were put forward by Ecuador earlier this year, suggesting that 3-5% tax should be levied on every barrel of oil exported to rich countries.

If states wish to adopt a more conservative option, he said, only aligning VAT on energy products to other products would free about $150bn a year in resources currently deployed inefficiently.

Separately, there also appears to be some progress from developing nations in ensuring that funds are not misused or lost due to corruption, an issue that has long plagued overseas development aid.

Ballesteros says reports that poorer nations are embedding climate change within their policy frameworks were a “big leap”, arguing that this ambition now has to be matched by donor countries in the form of clear pledges.

UN talks in Warsaw this coming November look to be the most likely forum for new funding to be delivered. Finance ministers are set to be invited to take part in the summit, which could provide useful clues on what a global emissions deal in 2015 will look like.

“I think it will be important for Warsaw to send a signal that progress is being made on that count as well,” said the Overseas Development Institute’s Smita Nakhooda, who led discussions on mobilising finance.

“This is a space where we need to build momentum and there’s work that remains to be done.”