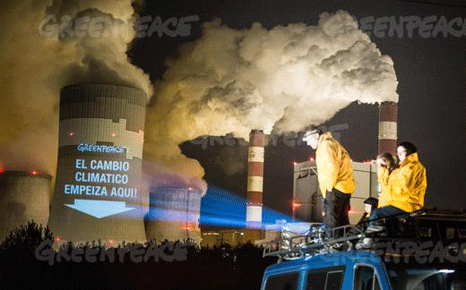 In response to Poland’s coal addiction and to urge governments to phase out fossil fuels, environmental campaigners projected messages on six coal plants in Warsaw, hosts to the UN’s conference on climate change beginning today.

Greenpeace displayed messages like “Climate change starts here!” and “Storms start here!” to highlight that coal power plants are major carbon emitters, central to causing climate change as well as being catalysts for the kind of storms which has recently ravaged the Philippines, said Greenpeace.

Kumi Naidoo, executive director of Greenpeace International, said about COP19: “It is time governments stopped acting in the interests of the fossil fuel industries. It is time they stopped putting the interests of corporate carbon profits ahead of people and the planet.”

On the fourth largest coal power plant in the world, Bełchatów, the message, “Arctic melt starts here!” was projected to draw the world’s attention to the exploitation of the Arctic by the fossil fuel industries. 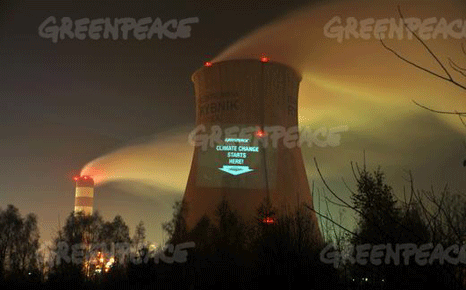 It also gave the group an opportunity to shine a light on the Greenpeace activists and journalists who protested against Arctic oil drilling and climate change and are still jailed in Russia, for the 52nd day now.

Despite criticisms from environmentalists for Poland’s support of the coal industry, its Ministry of Economy has decided to host the International Coal and Climate conference from 18-19 November.

Julia Michalak, a policy officer at Climate Action Network accuses the government of “grossly misusing its position as COP President”.

“By endorsing and co-hosting a coal summit in the shadows of the UN’s climate change negotiations Poland has proven it prefers to push its own selfish interests, and those of the coal industry, rather than working collectively to achieve a global climate deal by 2015,” she told RTCC. 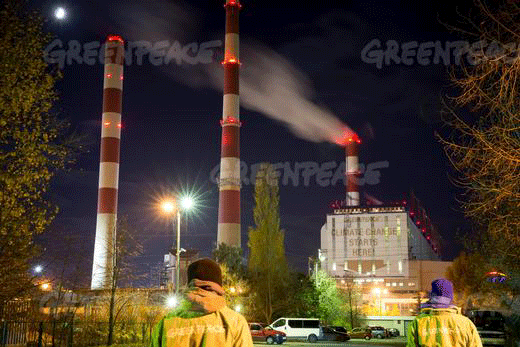 Christina Figueres is central to a protest by hundreds of youth groups from around the world who wrote a letter to the UN’s climate chief who is delivering a keynote speech to the coal conference.

The youth coalition told RTCC that Figueres’ presence at the conference legitimised the coal industry’s place in climate change negotiations.

Maciej Muskat, Director of Greenpeace Poland, said: “Poland has an opportunity to halve its coal demand and quadruple its renewable energy, if obstacles are removed and right incentives are put in place.”