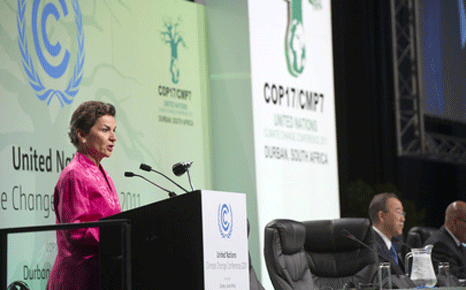 Hundreds of youth groups from around the world have written to UN climate chief Christiana Figueres asking her to withdraw from a coal summit taking place at the same time as international climate talks in Warsaw.

The open letter says she will not be welcome at a gathering of youth climate activists on Sunday if she does not cancel her appearance at the International Coal and Climate Summit hosted by the Polish Government and scheduled for November 18-19.

Youth groups say they have “deeply held concerns” over Figueres’ decision to address the coal summit, highlighting what they say is the “dangerous role of fossil fuel energy in the UNFCCC negotiations”.

The letter adds that Figueres’ attendance at the coal summit is neither “in line with the impartial role of the secretariat”, nor would it be “supportive of the objectives” of the climate change negotiations.

Coal is the most polluting of all fossil fuels, but has experienced rapid growth in the past decade, and currently provides 40% of the world’s electricity needs.

In 2010 it was responsible for 43% of carbon dioxide emissions from fuel combustion – that’s around 13.1 gigatonnes of the 51 gigatonnes of CO2 equivalent (GTCO2e) released that year.

-Is the coal and climate summit outrageous or irrelevant?

Lucy Patterson, a coordinator for Push Europe, which coordinated the letter, told RTCC they feared the presence of a senior UN official at the coal summit would send a negative message to delegates at the COP.

“It is also against the principle of impartiality of UN staff, and we are worried that it will set a dangerous precedent and open the door for the dirty industry to further influence decisions on climate change.”

She added: “This is basically a big exercise in greenwashing and we find her motivations for attending this conference really questionable.”

Yesterday, Figueres said that the talks in Poland would be a “pivotal moment” in mobilising funds to help poor countries adapt to climate change, as well as cope with impacts that are already inevitable.