Is Poland’s coal and climate summit outrageous or irrelevant?

World Coal meeting set to discuss future, but science and policymakers may have sealed the polluting fuel’s fate 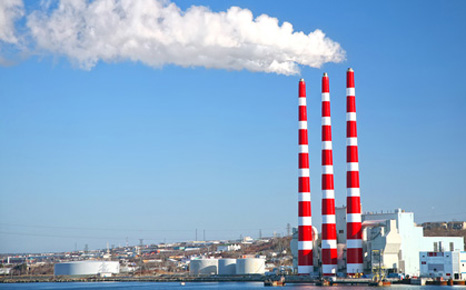 On a scale of diplomatic blunders, organising an international coal conference at the same time as a UN climate summit appears to be fairly substantial.

Coal is the most polluting of fossil fuels, which makes the Polish Ministry of Economy’s decision to host the International Coal and Climate conference from November 18-19 appear curious.

Without expensive technologies fixed to power stations, its noxious fumes can choke cities, raise mortality rates, cause acid rain and are heavily linked to climate change.

In 2010 it was responsible for 43% of carbon dioxide emissions from fuel combustion – that’s around 13.1 gigatonnes of the 51 gigatonnes of CO2 equivalent (GTCO2e) released that year.

In short, coal seems to be an enemy to what UN envoys call ‘climate ambition’. But the Polish hosts of the 19th Conference of the Parties to the UN, which starts on Monday 11 November, disagree.

The country’s environment minister Marcin Korolec says opponents of the coal summit are “very strange, if not worrying”.

He argues there is “no place for confrontation, isolation and selection” at the COP19 talks, pointing out that the International Energy Agency (IEA) predicts global demand for coal is set to rise until 2035.

“By endorsing and co-hosting a coal summit in the shadows of the UN’s climate change negotiations Poland has proven it prefers to push its own selfish interests, and those of the coal industry, rather than working collectively to achieve a global climate deal by 2015,” she told RTCC.

On a practical level it makes sense for Poland to maintain good links with the coal industry. In 2011 it consumed 77 million tonnes, generating 92% of electricity and 89% of heat.

For historical reasons Warsaw is reluctant to rely on Russian gas, although Korolec wants to explore for shale. In March the EU took Poland to court for ignoring its renewables directives.

Official documents indicate coal will play a major role in the country’s energy strategy until 2030, and this year the government announced plans for two new coal plants with a capacity of 900MW.

It’s still unclear if these will be fitted with carbon capture technology (CCS). If not, between them they could emit 1.5 gigatonnes of CO2 over the next 55 years.

Politically it’s a tough line for Polish politicians to tread. Coal is popular, climate targets are not.

In an email to RTCC, Pawel Mikusek, a spokesman for the Environment Ministry argued it is important “economies based on coal should not be excluded” from developing a global climate deal.

“If participants of the Coal Summit would discuss energy efficiency, would you find it inappropriate? As I understand, COP is about mitigation and reductions,” he said.

The Coal and Climate Summit’s organiser is the London-based lobby group World Coal, which says there are “many misconceptions” over the environmental impacts of coal.

Its six-page and three-point Warsaw Communique urges increased investment in more efficient coal plants by 2020. A copy signed by supporters will be presented to Korolec at the conclusion of the summit.

No-one from World Coal was available for interview, but its PR agency Bell-Pottinger said the event is “part of the WCA’s commitment to engaging and working with stakeholders to develop pragmatic actions to address the global debate around climate change.”

It added: “improving the average coal plant efficiencies globally from the current 33% to a standard 45% would result in CO2 emission reduction of 2.4 Gt annually.”

According to the IEA, only 50% of new coal plants are being constructed using high-efficiency, low-emissions (HELE) technologies.

That means that only around 600 of the 1,199 power stations the World Resources Institute (WRI) says were planned at the end of 2012 will meet the ‘clean coal’ criteria World Coal believes is necessary.

In an interview with RTCC he admitted there are serious questions over just how ‘clean’ coal can really be.

“You can reduce emissions through higher efficiencies and ultimately through CCS, but there’s still a question depending on which country you are talking about whether that’s enough,” he said.

For many advocates of coal CCS is the holy grail, a technology that would allow greenhouse gases to be captured and stored safely underground.

The IEA says it is “almost certain” that CCS will have to be fitted on all coal plants after 2020 to meet CO2 targets. 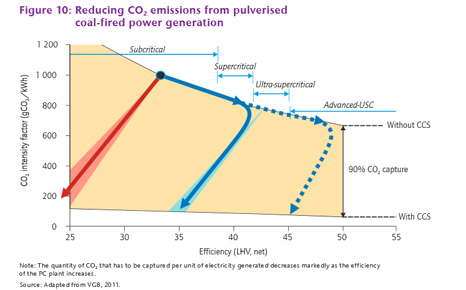 But despite a number of test facilities dotted around the world, and heavy investment from the EU, USA and China, no-one appears to have developed an efficient way of capturing CO2 from coal-fired power stations.

Keay says it is “not proven or economic”, pointing out that current CCS technology reduces the efficiency of power plants, adding: “there are some technical uncertainties. No-one has built a big end-to-end system yet.”

In a sign of how tough it is to get CCS working, at the end of September Norway announced it was pulling out of a full-scale facility at an oil-refinery and gas plant in the town of Mongstad.

Other test sites continue to operate. Shell has a project running in Canada, while the Global CCS Institute lists 75 other schemes running around the world.

The $2.4 billion Kemper County carbon capture project in Mississippi, backed by the US Department of Energy, is perhaps one of the most high-profile coal CCS initiatives.

But Chris Littlecott from the London-based environmental consultancy E3G says the coal industry now faces a “credibility gap”, because it has failed to invest in the technology over the past decade.

“The coal sector needs CCS more than CCS needs coal,” he said. “CO2 storage is limited, so we should focus on the highest value added applications – on industrial plants, biomass and gas power”.

“If it wants CCS it must pay for it.”

Given doubts over CCS and the limited number of high-efficiency coal power plants, coal’s role on a climate-aware planet appears precarious.

Recent reports from the Intergovernmental Panel on Climate Change (IPCC) and the UN Environment Programme have emphasised the limits to how much carbon dioxide the planet can safely accommodate.

This week UNEP said annual emissions need to be cut 12% on 2010 levels to 44 gigatonnes of CO2 equivalent (GtCO2e) by 2020, warning that based on current pledges they will be around 15% higher.

Meanwhile a PwC study based on the IPCC report said the amount of emissions countries can release is likely to be blown by 2034.

Those 13.1 gigatonnes of climate-warming gases generated by the burning of coal could be the difference between avoiding or blowing the 2C warming limit countries agreed on in 2009.

New emission standards in the US look set to wipe out older polluting coal plants, while Ben Caldecott from Bloomberg New Energy Finance points out Europe’s climate laws mean its 205 most polluting power stations will have to close in 2015.

But what’s also clear is that few believe coal is going to disappear.

While the EU turns to nuclear, renewables and gas, Caldecott points out China is set to open three large coal plants every month up to 2022, while India is on course to become the world’s second biggest coal importer.

Speaking from Beijing, the Climate Group’s Changhua Wu told RTCC that “coal will continue to be part of the mix”, hinting that this may change when the government publishes its next five year plan in 2015.

Hopes for any ambitious agreement at the Warsaw UN summit are low, but negotiators do expect a timeline for national emission pledges to be agreed ahead of a scheduled global emission agreement in 2015.

Respected analysts like the IEA’s gas, coal and power chief Laszlo Varr believe it will take ambitious climate policies and a high carbon price to keep coal in the ground, which is what many countries want a UN deal to deliver.

What may worry delegates at the Coal and Climate summit is that the industry’s future is no longer in their hands, making the World Coal event something of an irrelevance.

Without effective technologies to cut carbon emissions to the levels required by science, it may have to increasingly exist in a market where polluters pay a premium.