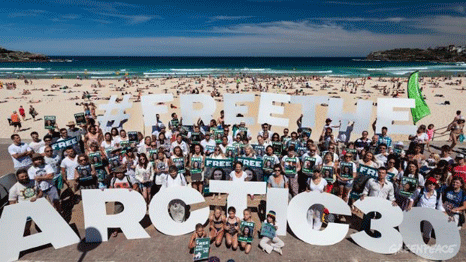 Russia: The Netherlands asked an international court on Wednesday to order Russia to release 30 people detained during a Greenpeace protest against oil drilling in the Arctic at a tribunal Moscow refused to attend. (Reuters)

Australia: Australia will have no government minister at the main United Nations climate negotiations next week, for the first time since the Kyoto accord in 1997. Diplomat Justin Lee, Australia’s ambassador for climate change, will represent the country at international talks in Poland, which are seen as vital to laying the groundwork for a global agreement to cut carbon emissions. (Guardian)

Research: Levels of greenhouse gases in the atmosphere reached a record high in 2012, according to a report from the World Meteorological Organization. (RTCC)

China: Chinese cities should close schools, cut working hours and stop outdoor activities during the most severe spells of air pollution, the Ministry of Environmental Protection said on Wednesday. (Reuters)

Research: Large palm oil companies that have promised to act ethically have been accused of land grabbing, ignoring human rights and exploiting labour in their African and Asian plantations. In a damning 400-page investigation, the companies are variously charged with impacting on orangutan populations, destroying tropical forest and burning and draining large tracks of peat swamp forest. (Guardian)

UK: Changes to the UK’s carbon targets could undermine its influence on UN climate negotiations, the Climate Change Committee has warned. (RTCC)

Borneo: BHP Billiton has been urged to step away from plans to open up an area of central Borneo to mining, with conservationists warning that it could damage a region inhabited by remote communities and the endangered orangutan. (Guardian)

UN: If policymakers fail to consider carefully how they define forests, they risk compromising the potential success of the UN-backed REDD+ program, which aims to reduce emissions from deforestation and forest degradation, scientists say. (CIFOR)

Research: The world’s richest countries are “shooting themselves in both feet” by providing high subsidies to the fossil fuel industry, according to a report from the Overseas Development Institute. (RTCC)