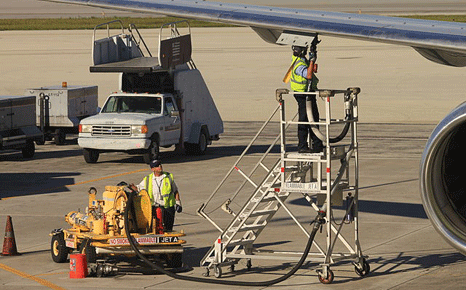 Boeing and South African Airways (SAA) have announced a partnership to develop and implement a sustainable aviation biofuel supply chain in Southern Africa, a first for the continent.

The companies signed a Memorandum of Understanding this week as part of the companies’ broader efforts to support environmental sustainability for the airline’s operations and the commercial aviation industry overall, in addition to advancing South Africa’s social and economic development.

The importance of renewable energy as part of the energy mix for the aviation industry was highlighted by the UN’s aviation body, ICAO, which voted a fortnight ago to lay the foundations for a market based mechanism to curb CO2 emissions.

Jessica Kowal from Boeing told RTCC that the company is committing to reducing carbon emissions from commercial aviation.

“The primary benefit of using biofuel in a commercial jetliner,” said Kowel, “is the biofuel’s ability to reduce greenhouse gases throughout its entire lifecycle, while also helping to improve the environmental performance of commercial aviation and the planes that are flying today.

“There could be other environmental benefits as well, such as reduced sulfur emissions, soot and particulates.”

Boeing has collaborated extensively with airlines, research institutions, governments and other stakeholders to develop road maps for biofuel supply chains in several countries and regions, including the United States, China, Australia and Brazil. The aerospace company’s plan to work with SAA is the first such project in Africa.

Perhaps in response to continued pressure from NGOs like Actionaid, the UN’s Committee on World Food Security encouraged countries to review their biofuel policies to ensure they do not conflict with food and security issues.

Kowal said Boeing has made “sustainability in aviation biofuel development a priority.

“We believe that…sustainable aviation biofuel development should provide socio-economic value to communities; it should not compete against food/water resources and it should not cause adverse changes in land use.”

Flight tests show that biofuel, which is derived from organic sources such as plants or algae, performs as well as or better than petroleum-based jet fuel.

When produced in sustainable ways, biofuel contributes far less to global climate change than traditional fuels because CO2 is pulled out of the atmosphere by a growing plant-based feedstock.

The World Wildlife Fund-South Africa will monitor and ensure compliance to sustainability principles that would ensure that fuel is sustainable and would lead to genuine carbon reductions.

Kowal also said that Boeing and the aviation industry as a whole are developing “drop-in” fuels, renewable fuels which can be blended with petroleum products.

Aviation biofuel refined to required standards has been approved for a blend of up to 50% with traditional jet fuel. Globally, more than 1,500 passenger flights using biofuel have been flown since the fuel was approved.