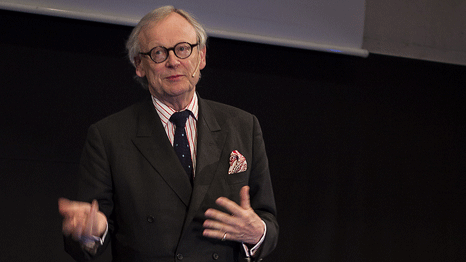 Lord Deben is tapping the final words of an article onto his iPad, leaning back into one of the large yellow sofas in his room.

The leisurely set up doesn’t belie any lack of urgency – it’s just that, where you might expect a desk, the room instead has a grand piano. He excuses himself while he adds the final touches to his piece, citing a deadline crisis thanks to an earlier meeting running on longer than he had expected.

John Gummer, reborn as Lord Deben upon the release of the 2010 Dissolution Honours List, is a long time Conservative, one of the most prominent voices on environmental matters in Westminster, and self-proclaimed “Climate Change champion” (according to his Twitter bio, anyway).

He is the longest serving Secretary of State for the Environment that the UK has had to date, holding the post for sixteen years under the governments of the Margaret Thatcher and John Major, and is now head of the Climate Change Committee, the independent body which advises the government on its climate policies.

The final touches of his own article complete, he is ready to turn his attention to what it means to be the arch-green in a party that is increasingly being perceived on losing grip on its environmental credentials.

While Cameron’s initial branding of the Coalition as the “greenest government ever” has been washed away under a sea of controversy over fracking and certain sceptic voices in the party, Deben declares that his overall faith in the commitment of the government to tackling climate change is unshaken.

“David Cameron is very much committed to the issue of combatting climate change,” he says. “He’s utterly committed to it.”

“He listens to the Climate Change Committee, he listens to all sorts of other people. On this issue he has been a very significant supporter. After all, he’s just presided over a government which has put £7.4 billion into the necessary changes between now and 2020, so it’s been a pretty remarkable situation in a time of restraint.”

But, he adds, somewhat evasively: “Of course there are other voices who are busy trying to make themselves heard.”

It would be easy to assume that this is a sly reference to George Osborne, with whom it looks like the Climate Change Committee could soon come to blows over the potential weakening of the UK’s carbon budget.

The Climate Change Committee wrote to Ed Davey, the Secretary of State for Energy and Climate Change, advising that there was no need to change the UK’s ambitious fourth energy budget, which aims to halve UK carbon emissions compared to 1990 levels between 2023 and 2027. The target as it stands, they wrote, remains broadly in line with EU ambition.

The UK is the first country to set a binding carbon budget, which were introduced under the 2008 Climate Change Act. The budgets could prove a useful indicator for global policy direction since the IPCC report, launched last month, set a figure for the exact amount of carbon the world can burn if global warming is to remain under control.

While Cameron was responsible himself for confirming the ambitious UK budget, Osborne announced at the Conservative Party Conference last month that the UK “should not be in front of the rest of the world” when it comes to tackling climate change.

But Deben remains loyal to Osborne, saying that it is “perfectly reasonable for him to ensure the competitiveness of Britain.”

“After all, that’s part of the arrangement that we have, and that’s why we’ve produced a letter – and it’s a letter, not a criticism at all – explaining in advance of our final advice on the forthcoming budget…

“I think we’ve got to be a bit careful of suggesting divisions where there aren’t any.”

Meanwhile, he adds, Britain must be careful of the sort of leadership it aspires to show. As the president of GLOBE International, an organisation of legislators who this year produced a guide to the climate laws in 33 countries, he is keenly aware of Britain’s place in the world.

It would be wrong to say Britain was a world leader when it comes to climate change, he says, when countries such as China, South Korea and Mexico have already committed to serious action.

But the UK has continued to show a leadership role in the EU, he adds, ever since it led the Europe to the table on the Kyoto Agreement.

“It is very important we should go on doing that, and it would be a great mistake if we didn’t, because somebody’s got to lead,” he says.

“No good hanging around after you, Claude. This is not an after you Claude situation because there is an urgency here.”

But he warns that the UK should be wary about staying too far ahead of the game, making his point with a choice quote from poet T.S. Eliot: “One step ahead of the rest is genius, two steps look out for the men in white coats.”

He explains, “People won’t follow you unless you do things yourself, but they also won’t follow you if you’re so far out of kilter that they think it’s really not possible. You have to keep ahead, but not so far ahead as to be out of step.”

But ultimately, wherever it eventually settles in the leader board, Britain must act on climate change, because it has an historic responsibility that it needs to face up to, as well as its obligations on a number of other fronts. “We were the leaders in the industrial revolution,” he says, “so first of all we have disproportionate responsibility for where we are.”

This is a sentiment echoed by Ed Davey, who said that the carbon budgets and climate policy of the UK already reflect a need to accept the “deepest cuts” in their emissions.

The obligation is also one that stems from Britain’s role in the modern world: “If you look at the companies that are represented on the British stock exchange, you’re then talking about something near 11% of the world’s emissions, so it’s a mistake to think that we don’t have responsibility for those,” he says.

To fail to step up to the challenge is not just shirking the moral obligation to people in developing countries; the foundation of all his work in tackling climate change, he says, is rooted in the concept that not to do so would “challenge my view of humanity”.

“It’s a real challenge to the nature of being a human being, because the difference between human beings and the rest of creation is that we know and we can plan, we can think and here we are with all this knowledge,” he says.

“The thing that matters is are human beings capable of being able to translate what they know into action and not allow themselves to be led astray by convenience, emotion or anything else.

“It’s a fundamental part of the human condition.”