We have selected the highlights from Globe’s analysis of China’s attempts to address climate change.

China matters. It is now, by some margin, the world’s largest emitter of greenhouse gases. In fact, latest estimates put China’s emissions as more than the US and EU combined. Emissions have doubled in the last 8 years. And, as China’s economy continues to grow strongly, energy use is forecast to increase by 47% between 2010 and 2015.

Even with this staggering investment, coupled with the ongoing drafting of a comprehensive climate change law, there is no credible scenario under which China’s emissions stabilise and fall in the short- to medium-term.

From a climate perspective, the priority is reducing the impact of burning coal, which satisfies more than 70% of China’s energy demand and, under any realistic scenario, will remain a massive part of China’s energy mix for decades to come.

Carbon capture and storage technology is, therefore, essential but international progress with this technology is woefully inadequate.

There are two other rays of hope. One is the recent outcry about Beijing’s choking air pollution, much of which originates from coal burning.

With an incoming leadership sensitive to the views of China’s growing middle classes, air pollution – and therefore tackling coal use, at least around cities – is rising up the agenda and, although driven by health concerns, could have significant climate benefits.

The second is energy security. China is becoming increasingly reliant (more than the US) on imported fossil fuels, whether it is coal from Australia or oil from the Middle East/GuIf. This presents China with supply risks.

A big geopolitical issue is how China manages this relationship with supplier countries and how much risk they are prepared to accept.

One thing is for certain: if countries are serious about climate change, they must work with China to develop and deploy the technologies to tackle emissions from coal. And they must do it now. 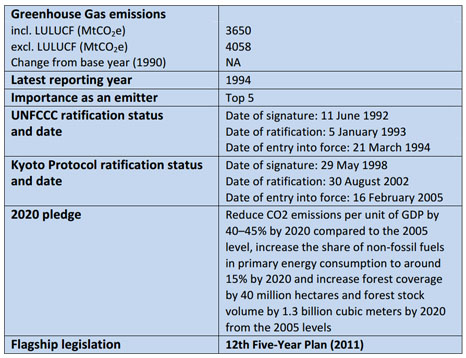 There is not a division of legislative power between the central government and the provincial governments in China.

China’s stance in combating climate change has focused mainly around energy related laws. Climate change was first officially referred to in legislation or regulations by the Chinese government in China’s National Climate Change Programme of 2007, and repeated in China’s Policies and Actions for Addressing Climate Change 2008.

In 2009, the NPC passed a comprehensive Climate Change Resolution. All of these are not strictly laws but policy documents guiding legislation.

Although there is not yet a comprehensive Climate Change Bill in China, Congressman Wang Guangtao (Chair of the Environment Protection and Resources Conservation Committee of the National People’s Congress) made the announcement, on 7 November 2010 at the GLOBE International legislators’ forum in Tianjin, that China would begin work on a comprehensive climate change law.

It is expected that a first formal draft of the law will be produced by early 2013 with passage likely by 2015.

Waste not want not

In the meantime, China’s domestic climate‐related laws are dominated by a focus on energy saving, reflecting the need for the country to improve energy efficiency to enable it to keep pace with energy demand as the economy grows strongly.

The draft Energy Law contains provisions on the promotion of clean energy and energy efficiency.

The goals are relatively vague with clearer targets expected to be set by ministries, including the National Development and Reform Commission (NDRC), Ministry of Construction, Ministry of Agriculture, Ministry of Transportation, the Bureau for Tax and others.

It increases the number of pollutants included in the “total emissions control” system and sets new targets for the energy intensity of GDP (a reduction of 16% by 2015), the percentage of non‐fossil fuel energy (to increase to 11.4% by 2015 from 8% in 2011) and an increase in forest coverage of 21.6%.

The specific policies and mechanisms required to implement these targets are being developed by ministries and provinces.

In November 2011, the State Council approved a package of policies and measures aimed at meeting the energy and carbon targets included in the 12th Five‐Year Plan.

This package included Provincial and Municipal‐level carbon and energy intensity targets, recognising that the Provinces and Municipalities have different economic structures, efficiency options and levels of wealth.

The 12th Five‐Year Plan encourages the use of market mechanisms as a tool to encourage emissions reductions.

Seven Provinces and Municipalities (Beijing, Chongqing, Guangdong, Hubei, Shanghai, Shenzhen and Tianjin) are developing pilot emissions trading systems, due to begin in 2013, the experiences of which will inform the design of a national scheme before 2020.

Significantly, although outside the scope of this study, in October 2012 Shenzhen Special Economic Zone passed local legislation to restrict emissions of GHGs, the first such legislation in China.

In October 2012 the State Council published a White Paper on energy policy. At the same time it announced that China’s nuclear programme, suspended after the Fukushima disaster, would resume but at a slower pace than initially planned Under the 12th Five‐Year Plan.

The plan has several targets, these include a cut in the carbon intensity of GDP 17% by 2015, to cut energy intensity by 16%. There is also an 11.4% non-fossil fuel target for primary energy consumption and to increase forest coverage by 21.6%.

The government plans to cut energy waste by 20% between 2006 and 2010. It also set an Ambitious goal for using renewable energy and a 10% raise in the proportion of renewable energy in primary energy supply by 2010. It also aims to stabilise the 2005 nitrous oxide emission level, increase the 2001 forest coverage rate by 20%, and increase the carbon sink by 50 Mt over the 2005 level by 2010.

Renewable Energy Act – This Act described duties of the government, business and other users in renewable energy development and utilisation. It also included a series of measures and goals relating to mandatory grid connection, price management regulation, differentiated pricing, special funds and tax reliefs, and it set the goal to realise 15% of China’s energy from renewable sources by 2020.

Article 7 requires that energy authorities of the State Council set middle‐ and long‐term targets of the total volume for the development and utilisation of renewable energy at the national level, which shall be implemented and released to the public after being approved by the State Council.

The Act requires the government to encourage and support the application of renewable energy in various areas.