We have selected the highlights from Globe’s analysis of South Korea’s  attempts to address climate change.

South Korea is one of the major economic success stories in Asia over the last few decades, growing from a poor developing country to become one of Asia’s “tigers” in quick time.

On climate change it was also one of the first countries to embrace the “green growth” agenda.

Following the global financial crisis in 2008, South Korea’s stimulus package was widely seen as the “greenest” with up to 69% of the spending on “green” projects (such as renewable energy, energy efficiency, smart grids).

It followed up this move with the 2010 Framework Act on Low Carbon Green Growth, creating the legislative framework for mid- and long-term emissions reduction targets, cap-and-trade, a carbon tax, carbon labelling, carbon disclosure and the expansion of renewable energy.

In 2012 it made a further step forward with the passage, in May, of the Act On The Allocation And Trade Of Greenhouse Gas Emissions Rights.

This law creates a national cap-and-trade scheme to begin in 2015.

This domestic ambition has grabbed the attention of many other countries across the world, with many commentators viewing South Korea as a regional leader on this agenda 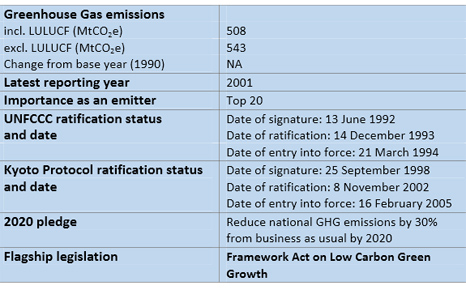 Political background
The Korean Constitution empowers the National Assembly to enact Acts and the Executive and other organs to enact subordinate statutes. This is a unicameral legislature.

Carbon pricing
Prior to the establishment of the cap‐and ‐trade scheme, the government has set an aim to cut 8.3 million tonnes of CO2 equivalent  from projected industrial and power sector GHG emissions in 2012.

Under the proposal, a combined 366 firms must cut emissions by 1.42% below their business as usual levels and firms that fail to meet their targets face a fine of up to a maximum of 10 million Won (US$8,485).

Energy supply and energy demand
Korea’s Energy Vision 2030, a governmental plan launched in November 2006, sets an ambitious target of reducing energy intensity by 46% between 2007 and 2030.

It leans on three pillars (“the 3 Es”) to dictate the direction of the national energy policy until 2030: energy security, energy efficiency, and environment‐friendly. It also sets a target of 11% renewable energy out of the production portfolio by 2030, and allows all households to access affordable energy.

The Enforcement Decree of the Framework Act on Low Carbon Green Growth/2010 – This decree regards the operation of the Presidential Committee on Green Growth, establishment of and support for green industries investment companies and control of quantity of GHGs emitted and the quantity of energy consumed in each area including transport and architecture.

Act on the allocation and trade of greenhouse gas emissions rights/2012 – The first phase of the trading scheme is due to start in 2015, covering companies that emit 125,000 metric tonnes or more of carbon dioxide a year and factories, buildings and livestock farms that produce at least 25,000 tonnes of the gas annually.

Act on the Creation and Facilitation of Use of Smart Grids/2011 – The Act aims to create smart grids and to facilitate them to create green growth and to deal with climate change. The government is to develop and implement a 5‐year plan for creating and facilitating the use of smart grids. Research and development resources are to be provided for.

South Korea has a wide range of legislation relating to climate and energy, in addition to those mentioned above. For a full list and more information visit the dedicated India page on the Globe website.