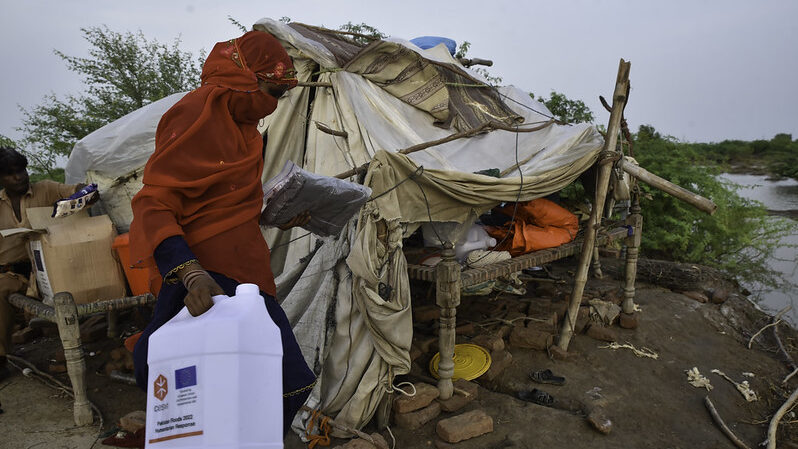 The EU is open to creating a new funding stream to help victims of climate disaster recover – as long as China contributes.

On one of the most contentious issues at Cop27 in Sharm el-Sheikh, EU climate chief Frans Timmermans hinted at room for compromise.

“We want to be bridge builders. We are open for this facility, but under certain conditions, and we need to discuss this,” Timmermans told reporters on Wednesday.

A group of 134 developing countries, known as the G77, and China, is calling for agreement in Sharm el-Sheikh this week to set up a loss and damage facility.

Rich countries prefer a “mosaic” of funding arrangements. The EU argues a facility is just one option to consider – and the decision should be made at next year’s summit.

Existing and new funding instruments, ranging from debt relief to a windfall tax on oil and gas profits, should form part of the solution, Brussels says. Many of these sit outside the UN Climate Change process.

In any case, Timmermans said the pool of contributors should be broader than the list of countries defined by UN Climate Change as “developed” in the 1990s.

“I think everybody should be brought into the system on the basis of where they are today. China is one of the biggest economies on the planet with a lot of financial strength,” said Timmermans. “Why should they not be made co-responsible for funding loss and damage?”

Last week, the prime minister of Antigua and Barbuda appeared to agree. “We all know that India and China… are major polluters and the polluters must pay,” Gaston Browne said. “I don’t think that there’s any free pass for any country.”

The island leader later clarified that there had to be a “differentiated assessment” that took into account historic emissions.

At a press conference last week, China’s climate envoy Xie Zhenhua said Beijing made voluntary contributions through south-south cooperation and was under no obligation to do more.

Developing countries’ position hasn’t budged. Under a detailed proposal published on Tuesday, the G77 calls for a committee to work out how the facility would work for approval next year.

The EU’s shift in position puts the spotlight on the US, which has so far rejected the proposal for a new fund. “That’s just not happening,” climate envoy John Kerry said on Saturday, citing concerns about liability for compensation. In other interviews, he took a softer tone, but remained vague about where the landing ground might be.

One of the arguments against a facility is it would take too long to get money flowing.

Developing countries have previously said the new fund could be modelled on the UN’s flagship Green Climate Fund (GCF), which was established in 2010. It took five years for the first projects to be approved.

The EU argues existing and new financial instruments outside the UN climate process could deliver funding at the scale needed, more quickly.

On Wednesday, Timmermans announced that the EU had allocated €60 million ($62m) for “loss and damage” from its Global Gateway programme. This would support an early warning initiative, climate and disaster risk finance and insurance mechanisms.

Other ideas include a new trust under the World Bank, a funding window at the GCF, a windfall tax on oil and gas profits and reforms of the financial system.

The Alliance of Small Island States (Aosis) has so far been unimpressed with wealthy countries’ alternative proposals. In a statement, the group said it was “gravely concerned” with the lack of progress on the issue.

Aosis chair and environment minister Molwyn Joseph, of Antigua and Barbuda, said some countries like the UK and New Zealand, had been “willing to engage”.

But “some developed countries are furiously trying to stall progress and even worse, attempting to undermine small island developing states,” he said.

Following ministerial consultations on Wednesday afternoon, one source close to the discussion told Climate Home that some developing countries may be ready to accept a compromise, as long as it leads to a decision on funding arrangements at Cop28 next year.