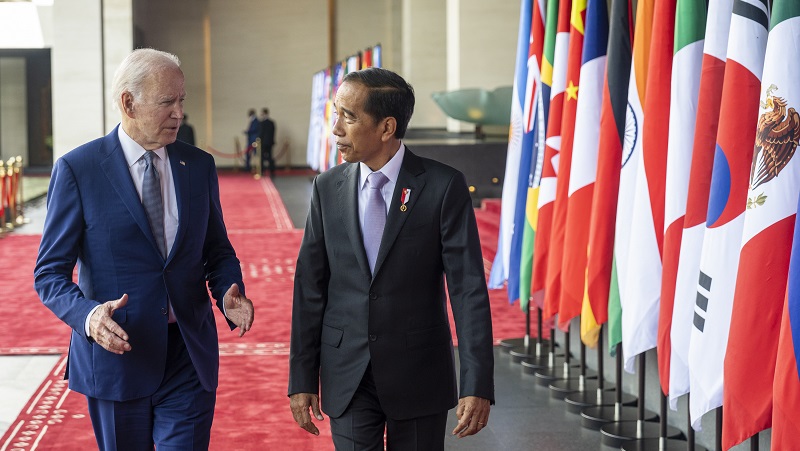 After four hours of talks on the Indonesian island of Bali last night, US president Joe Biden and China’s president Xi Jinping have agreed to talk more.

There was no joint statement. But both governments’ summaries said the two largest emitters will “work together”. The US said on climate change, China said on Cop27.

That doesn’t automatically mean the US-China working group is back on but it does mean climate envoys John Kerry and Xie Zhenhua can talk formally here in Sharm el-Sheikh – with agendas, notes and decisions. US secretary of state Anthony Blinken will visit China to pick up where Biden and Xi left off.

Today in Bali, Indonesia is expected announce a “just energy transition partnership”, which the US and Japan led on. A source with knowledge of the negotiations told Climate Home that the deal was likely to be between $18 billion and $20 billion. Another said that includes private sector finance.

This follows the South African model of a package to create green jobs and economic regeneration for coal-dependent areas on the journey to clean energy. Indonesia has been keen to consult on its plans and negotiate favourable terms before agreeing on the size of the package.

The Institute for Essential Services Reform (IESR) think tank, which is advising the government on the deal, estimates there are 5GW of coal plant capacity which are highly polluting and could be closed at a cost of $4.5 billion. That’s the low-hanging fruit.

In total, IESR estimates that replacing all of Indonesia’s coal capacity with renewables will cost about 60 times what’s on offer here – $1.2 trillion.

A key question is how much will be delivered in grants vs loans. And will coal plant owners be compensated for early closures? While the emissions wins could be considerable, that feels icky.

Ministers have arrived in Sharm el-Sheikh this week to take the baton from negotiators, but the Egyptian presidency is not ready for that.

Foreign minister Sameh Shoukry told a plenary on Monday technical discussions will continue until this evening and ministerial consultations on key outstanding issues will only start Wednesday. Traditionally, representatives from developed and developing countries are paired up to find landing zones on the thorniest issues.

That compresses the timeline to thrash out political differences. Meanwhile ministers are stuck politely reiterating their positions in roundtable events.

There is no consensus on how to ramp up national emissions targets. The battle lines on loss and damage finance have not budged: the options are to establish a new facility, or work with a “mosaic” of funding arrangements. Check out Carbon Brief’s tracker for where each issue is at.

Egypt is banking on progress in technical discussions to move the needle by tonight.

“It’s going to be a brutally hard second week for climate negotiators at Cop27,” dean of the Fletcher School Rachel Kyte tweeted.

In private, both developed and developing country negotiators told Climate Home that ministers could be brought in earlier to start working towards a political resolution. One Cop veteran defended the timetable as not particularly unusual.

These summits usually produce a “cover text”, which puts a unifying narrative on the various technical outcomes. A draft is taking longer to emerge than normal.

Wael Aboulmagd, Egypt’s Cop27 special representative, set out the challenge: “There are two extremes and everything in between. The idea is to get everyone’s views in there.”

Some countries, including Argentina, Uruguay and Brazil, want to keep the text to a minimum. Others, including Europeans, see it as an opportunity to set a political direction. The UK wants references to reform of multilateral development banks and just energy transition partnerships – elements of progress outside the formal negotiating agenda.

The dynamics suggest Egypt could settle for a shorter document than the 8-page Glasgow Pact.

Cop decision texts don’t have to turn into major political declarations every year. On the other hand, this is the place where Egypt can address expectations that Cop27 will deliver for vulnerable countries.

One big question is whether the text will include language on keeping the 1.5C goal within reach. That’s backed by least developed countries, small island states, the EU and the US.

Emerging countries including China want to stick to the language of the Paris Agreement to hold the temperature increase “well below 2C” and “pursue efforts” to limit it to 1.5C.

It’s a row set to dominate the G20 leaders’ summit in Bali, which starts today. Ministers were unable to agree on a joint communique in September after pushback by China and India on emphasising 1.5C as the world’s climate goal.

As with US-China cooperation, the parameters of a Sharm deal may be set from hundreds of miles away.

At Cop27 on Friday, Joe Biden announced “alongside the European Union and Germany, a $500 million package to finance and facilitate Egypt’s transition to clean energy”.

What the US is contributing to this is not clear. Germany is giving €250m. That’s €100m in loans on better than normal terms, €100m in debt forgiveness and €50m in grants.

Asked what the US is bringing, a spokesperson for the German development ministry (BMZ) said to ask the Americans. The US state department has not responded to repeated requests.

Other European countries are delivering $300m through the European Bank on Reconstruction and Development.

Together, all this European cash adds up to around 550m dollars or euros. More than the $500m Biden announced.

So what exactly is the US bringing? The joint US-German-Egyptian statement says the US and Germany will provide “expected support of €85m equivalent in grants”.

If you take off Germany’s €50m in grants, does that mean the US’s sole contribution is an “expected” grant of €35m and some help mobilising private finance?

It would explain why they’re not replying to our messages.

Moral support? – Germany’s insurance-based “Global Shield” initiative for climate victims officially launched on Monday. Germany is contributing €170m, France €20m, Ireland €10m and Canada €7m. President Joe Biden claimed the US was “supporting” the initiative, but it was not on the list of initial funders. “Further contributions by donors are expected to materialise soon,” said the German development ministry.

Big brother – Germany has complained to Egyptian authorities of unwanted monitoring and filming of its events at Cop27 by security officials. The UN confirmed Egyptian national security officers are at the venue and is investigating the complaints, Deutsche Welle reports. Germany has been vocal on human rights and held an event with imprisoned activist Alaa Abd el-Fattah’s sister.

‘Ludicrous’ – Cop27 special representative Wael Aboulmagd told a press conference that the media reports of the complaints were “vague” and “mostly inaccurate”. “On the face of it, it seems ludicrous. It was an open event. Everyone could walk in. Why would anyone put surveillance?”

NDC watch – Bahamas, Vietnam, Andorra, Timor-Leste have submitted updated national climate plans since the start of Cop27. The biggest economy among them, Vietnam, strengthened its 2030 emission targets to 15.8% from BAU unconditionally and 43.5% with international support.