Climate and energy ministers clashed over Ukraine, climate finance, methane, shipping, carbon levies and whether 1.5C or 2C should be the world’s warming limit 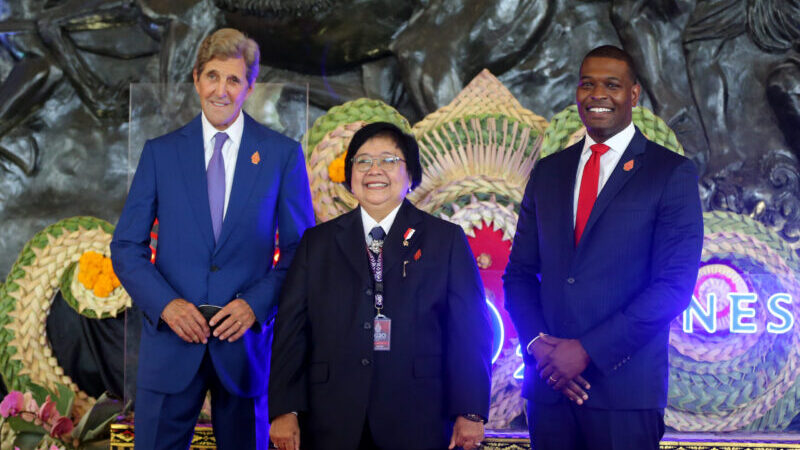 Energy and climate ministers from some of the world’s largest economies have failed to agree on joint texts at G20 meetings in Bali, Indonesia. With two months to the Cop27 summit, host Egypt has warned against “backtracking” on climate commitments.

Draft texts seen by Climate Home News show G20 ministers clashed on language over Russia’s war on Ukraine, climate finance and whether limiting global warming to 1.5C or 2C should be the world’s climate target.

Egypt’s foreign minister Shoukry said: “G20 members should play a leading a role in ensuring that the challenges created by the current global situation do not serve as a pretext or justification for the continued delay in the fulfilment of climate pledges or backtracking on hard-earned gains in the global fight against climate change.”

“It is concerning to see coal coming back as a source of energy in some parts of the world,” he said, adding that shortcomings on climate finance were worrying: “It is equally concerning that climate finance commitments, especially the $100 billion goal, are still lagging in implementation while the needs of developing countries continue to rise.”

Sharma, the British lawmaker who presided over last year’s climate talks, said: “It is certainly the case that what we did see was a number of countries backsliding on the commitments that they made in Paris [in 2015] and in Glasgow [last year]”. Neither Sharma nor Shoukry singled out any country.

One minister in attendance describing the meeting to Climate Home said: “Nothing happened in Bali. Failure. Weak presidency.”

Climate and environment ministers held a one-day meeting on Wednesday and energy ministers convened on Thursday.

Neither group was able to agree on a joint communique. Instead, a “Bali Compact” is expected to be published.

Climate Home has spoken to four sources in Bali and seen documents which suggest both groups of ministers faced similar divides.

Indonesian climate minister Siti Nurbaya Bakar began the climate ministerial with a plea to “build bridges not walls”. Italy’s climate envoy Alessandro Modiano called for the ministerial communique to include language which “reflects the unjustifiable and unprovoked Russian war of aggression against Ukraine”.

A draft text stated that “some members noted that existing challenges to address climate change and biodiversity loss have been exacerbated by the war in Ukraine.” But that was never going to fly with Russia and the text wasn’t agreed.

A similar discussion among energy ministers remained unresolved. Proposed language holding the war in Ukraine responsible for soaring energy prices and a global economic downturn was backed by G7 nations but opposed by emerging nations, including Russia, according to a source.

The draft texts show there was disagreement about how strongly to criticise rich countries’ failure to meet a promise to deliver $100 billion in climate finance to developing countries by 2020.

There was further disagreement on how much emphasis to place on “loss and damage”, referring to damages caused by climate impacts that cannot be recovered or adapted to.

Developing countries have called for bespoke loss and damage finance, paid by nations most responsible for causing climate change. Wealth countries have so far resisted.

A long-running dispute over whether to emphasise limiting global warming “well below 2C” or to 1.5C above pre-industrial levels rambled on. Under the Paris Agreement, countries agreed to limit global temperature rise to “well below 2C” and “pursue efforts” to limit it to 1.5C.

A second source at the talks told Climate Home that China and India had pushed for an emphasis on 2C, with China’s representatives describing it as more “scientifically feasible”.

At Cop26, all countries agreed to “revisit and strengthen” their 2030 climate targets by the end of 2022. Since then, few countries have done so.

A proposal to repeat the pledge, adding in a 23 September deadline for inclusion in a UN synthesis report, didn’t find consensus.

Meanwhile, India pushed for language on a ‘global net zero’ goal. It was opposed by Germany and the EU which argued it distracted from action in the 2020s, the source said.

Comment: Pakistan floods must be a wake-up call on climate action

A third source in Bali told Climate Home that Indonesia, which has lost nearly 20% of its tree cover since 2000, led a push against strong language on deforestation and land degradation.

There was no agreement on language to reduce methane emission despite more than 100 countries signing on to a global methane pledge at Cop26 to cut collective methane emissions 30% by 2030. China, India and Russia have not signed up.

The text further proposed language on cleaning up the shipping industry, which remained bracketed, meaning there was no agreement.

The draft text included a proposal to “eliminate any unilateral and cross-border measures and obstacles that are not conducive to addressing the climate change challenges” – a reference to the carbon levy adopted by the EU on imported goods from countries with lower environmental standards.

In response, the EU proposed alternative text, promoting “dialogue in the design and implementation of domestic policy measures, consistent with international rules”.