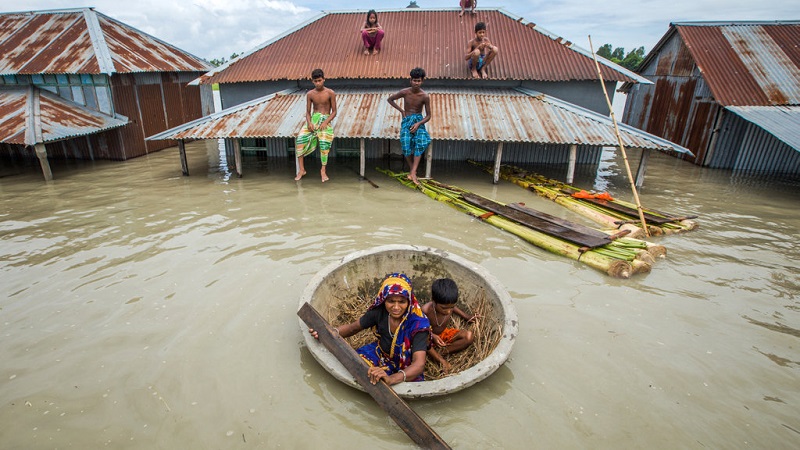 A family takes refuge on the roof of a submerged house in the city of Sirajganj, Bangladesh (Photo: Moniruzzaman Sazal / Climate Visuals Countdown)

Nations vulnerable to climate change have begun to publish “prosperity plans”, laying out what they want money to be spent on to stop climate change thwarting their economic development.

The Climate Vulnerable Forum (CVF) has helped Bangladesh, Maldives, Sri Lanka and Ghana put together lengthy documents laying out billions of dollars of investments they want to attract by 2030.

Senegal and Costa Rica are leading a group of around 30 nations with plans in the pipeline, according to Sara-Jane Ahmed, finance adviser to the Vulnerable 20 group.

President of Ghana Nana Akufo-Addo, who chairs the CVF, said: “The Climate Prosperity Plans (CPPs) are our strategy to prosper in a climate insecure world.”

He added: “The negative effects of climate change are also worsening the already high cost of capital that we face to mobilize commercially viable investments. So the CPPs will also be our investment and financing strategies.”

Ahmed told Climate Home that the rich governments which failed to deliver their promised $100 billion a year by 2020 were not going to mobilise the trillions of dollars that vulnerable countries need without private sector help.

She added that the United Nations Green Climate Fund, which distributes climate finance from developed to developing countries, was too slow to distribute. “We’re sitting ducks here,” she said.

She said the prosperity plans aim to use public finance from governments and multilateral banks to attract larger amounts of private finance, known as leveraging, quickly.

Some of the projects are likely easier to get funding for than others. Bangladesh’s prosperity plan focuses overwhelmingly on adapting to climate change while rich governments and private companies have tended to prefer emissions-cutting projects.

Of the $76bn by 2030 it proposes, two-thirds of the projects are for adapting to climate change and a further quarter are for climate resilience. There is $8bn for “low-carbon co-benefits”, although some resilience funding is for renewables, Ahmed said.

Rich governments and philanthropists have prioritised emission reduction over these kind of adaptation projects. In 2019 two-thirds of international climate finance went to emissions cutting.

The private sector often favours emissions reductions over adaptation too. Clare Shakya, climate lead of the International Institute for Environment and Development, told Climate Home: “Private investors find mitigation actions much easier to understand and to make a business case to invest in (and make a profit or reduce a cost).”

Sri Lanka’s plans are big on renewables. They also include rolling out mosquito nets to stop climate-driven dengue fever in public spaces, protecting informal workers from extreme heat and keeping seawater from rising sea levels out of farms.

Shakya said mosquito traps would be hard to find private investment for. “With adaptation,” she said, “the private sector should be able to see value of a more resilient value chain, but seems harder to make the case – perhaps because payoff is less reliable”. For example if there’s no storm one year then flood defences seem redundant. The same is true if the flood defences are overwhelmed.

For adaptation projects like seawalls, Ahmed said that companies whose assets were protected should cover some of the cost with the public sector covering the rest. In California, Facebook is paying $8 million for a levee to protect its headquarters from rising sea levels while the nearby community of East Palo Alto chips in $6m.