Seen from space: Extreme drought dries up rivers across the globe

In China, Lake Poyang is just a quarter of its normal size, while in Germany, the Rhine is running at 45% of its average levels for August 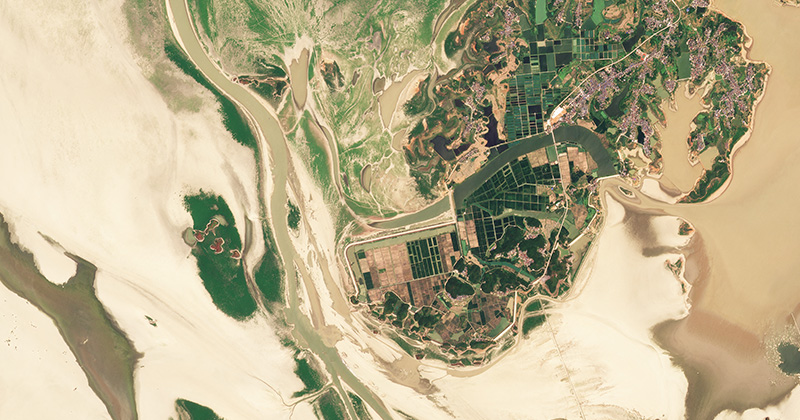 China’s largest freshwater lake, Poyang Lake, typically covers more than 3,500 square kilometres and is a major water source for rice crops in Northwest China. But today, after a month of extreme drought, it’s only about a quarter of its size and has farmers digging for water.

The shrinking water levels can even be seen from space. An analysis of satellite imagery by Climate Home News, with the support from the monitoring platform Planet, shows significant impacts to freshwater ecosystems around the world.

As in China, several major rivers and lakes across Europe, Asia and North America have been severely affected by extreme weather, also hurting local populations. These impacts serve as a warning of future climate warming scenarios, experts said.

“What we have experienced this summer is what climate scientists tell us is going to happen in the future. This summer matches the predictions that we have for a hotter, drier future,” said Christine Colvin, advocacy director of the nonprofit The Rivers Trust.

Climate change is now becoming one of the “key drivers” of degrading freshwater ecosystems worldwide, according to the latest report by the UN’s panel of climate scientists. These ecosystems are fundamental for water access.

In China’s case, a month-long heatwave preceded the country’s worst drought in history. In a matter of weeks, some of the Asian country’s largest water bodies began to shrink, leading to economic and even cultural impacts.

Along the Yangtze river, for example, precipitation was 80% lower than usual,according to the World Meteorological Organization (WMO). This led to suppliers to Tesla, Toyota and Foxconn shutting down their factories due to lack of hydropower in the Three Gorges Dam.

“We are clearly witnessing the impacts of climate change,” said Wenjian Zhang, WMO assistant secretary-general.The situation in China is “complex”, he said, and has tested the country’s disaster prevention and relief work.

Although many of these water bodies —such as Lake Poyang— drop seasonally, this year’s drought was the worst in recorded history, Chinese officials said.

Attribution to climate change can be different depending on the region and can only be determined by conducting local studies, said Andrew Hoell, co-lead of the National Oceanic and Atmospheric Administration (NOAA) Drought Task Force.

However, Hoell added that “almost all regions of the globe have observed a trend to increasing temperatures that have led to more intense and longer duration heat events.”

In Europe, for example, the UK’s heatwave would have been almost impossible without current climate change, which has already warmed the planet by 1,2°C. After this event, drought was declared in large parts of the country.

Along the same lines, Europe’s Global Drought Observatory stated in its August report that low precipitation levels combined with “a sequence of heatwaves from May onwards”. As a result, water levels dropped in some major European rivers such as the Rhine in Germany, the Loire in France and the Tagus in Portugal.

In the Rhine, for example, some parts of the river were running at 45% of their average level for August, said Germany’s Federal Institute of Hydrology. Cargo ships were forced to carry lighter loads, increasing transport costs.

The impacts were even more significant because most of the continent’s wetlands were also depleted, said Colvin. This has left many freshwater ecosystems without their natural “buffer areas,” she added.

At a global level, wetlands have disappeared three times faster than forests since the 1970s, according to the Global Wetland Outlook report. To Colvin, this shows a need to “build back wetter.”

While developed nations focused more media attention, some developing countries also faced severe drought this year. In Iraq, for example, the Tigris and the Euphrates rivers have also been affected by heat and by new dams built in Turkey and Iran.

The Middle Eastern country has been suffering the effects of increasing heat for several years, with government reports even warning that the Tigris and the Euphrates rivers could go completely dry by 2040.

This year, water reservoirs along the Euphrates such as the Qadisiyah Lake showed significantly low water levels. In the Kurdistan region, the lowering levels of Lake Dukan threaten farmer’s harvest. In total, government officials have said water reserves are down 50% from last year.

One of the main problems of extreme drought in freshwater ecosystems are the impacts to biodiversity, explained Colvin. With lower water levels, pollutants become more concentrated, increasing their toxicity to wildlife. Combined with extreme temperatures, “anything living in those rivers is really struggling to survive,” she said.

In western United States, salmon species and other wildlife depending on them for food are on track to extinction, said Konrad Fisher director of the Water Climate Trust. The region’s water sources for humans are also shrinking.

“We have overallocated the water resources of most of the western United States. That makes us less climate resilient. We’re still in the 1800s of wasteful and excessive water use,” said Fischer.

Lake Powell, the second largest water reservoir in the US, is an example of the shrinking sources. Today, it’s levels are at a mere 26% of its capacity, its lowest levels since 1967. The Colorado river basin, of which it’s part of, provides water and hydroelectric power to 40 million people.

Rivers and lakes have been at the frontlines of this summer’s extreme weather, Colvin said. “We can take the health of rivers as a proxy for our readiness to climate change, and we’re not ready,” she concluded.