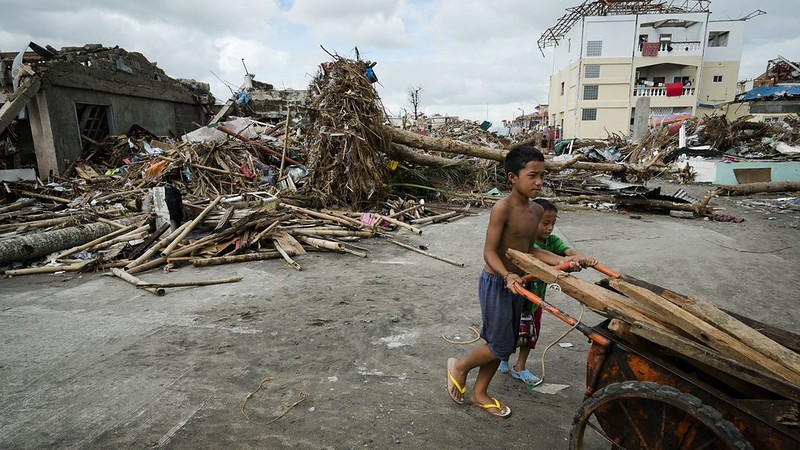 Young boys collect pieces of wood they can use to rebuild their house in Leyte, after typhoon Haiyan struck the Philippines in 2013 (Photo: UNHCR / R. Rocamora/Flickr)

An inquiry by a human rights commission in the Philippines found some of the world’s largest historic polluters liable for causing global heating – giving fresh impetus to lawsuits centering climate change as a human right issue.

The report found that “at the very least, [their acts] are immoral” and may form the basis for liability depending on national jurisdictions. The continued expansion of fossil fuel exploration provides further legal grounds for lawsuits, it said – handing campaigners legal arguments for seeking climate reparations through the courts.

“The results… will serve as crucial building blocks for community-led efforts to hold the fossil fuel industry accountable around the world,” said Greenpeace, which filed the petition with local groups.

“The era where the fossil fuel industry and its backers can get away with and profit from their toxic practices is coming to an end,” added Yeb Saño, head of Greenpeace Southeast Asia.

The inquiry report is among a flurry of proceedings to frame climate change as a human rights issue.

The multi-year investigation began in 2013 following a petition by survivors of Typhoon Haiyan, which killed 6,000 people and was made more extreme by climate change.

The findings are based on hearings in the Philippines as well as in New York and London, scientific and legal evidence and 65 witness testimonies. Only a handful of the 47 carbon majors responded to the inquiry, mostly to dismiss the process.

The Center for International Environmental Law (CIEL), which provided expert testimony, described it as a “watershed moment for climate accountability”.

“The Commission has created a roadmap and a resource for investigations and litigation everywhere,” said its president Carroll Muffett, who added the report had “immediate relevance” in courtrooms and for years to come.

Newly appointed UN special rapporteur on the promotion and protection of human rights in the context of climate change Ian Fry welcomed the report. He said he would be exploring countries’ and companies’ human rights obligations in their response to global heating in his work. 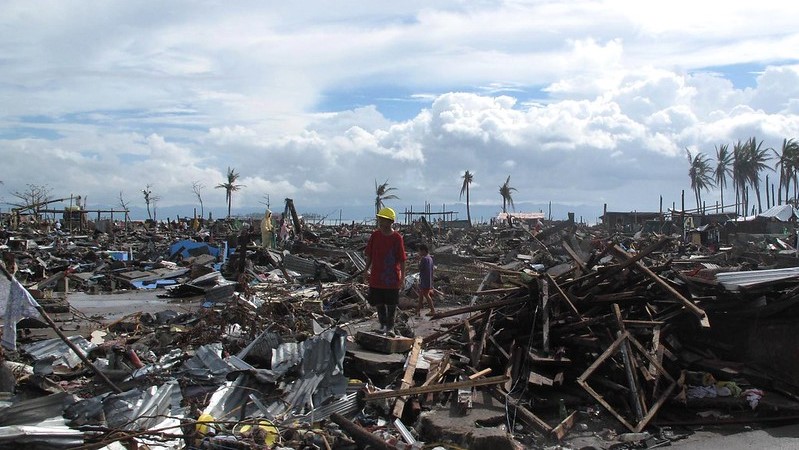 The devastation wrought by Typhoon Haiyan in the city of Tacloban in the Philippines (Photo: Russell Watkins/UK Department for International Development/Flickr)

But in the Philippines, where typhoon survivors who brought the case have been waiting for the outcome for years, the response was more measured.

The report got little media or political attention nationally, despite its publication three days before voters headed to the polls to elect their next president.

Roberto Eugenio Cadiz, who chaired the inquiry, told a press conference that it was “a very difficult process” because of limited financial and human resources.

Because there are no international bodies that can litigate against multinational companies, the commission’s findings will have to be proven in domestic courts, he said. None of the 47 companies assessed in the inquiry are headquartered in the Philippines.

For Red Constantino, executive director of the Philippines-based Institute for Climate and Sustainable Cities this makes for “a moral victory” but it will change little in practice for one of the world’s most climate vulnerable nations.

“It is almost like a manifesto,” he said of the findings. “But I can’t see how the executive, legislative, or judiciary will act on it,” he said. “The ruling can be cited in other cases around the world, but as far as the Philippines is concerned, it moves very little.”

However, the commission’s ruling could be influential in another emerging legal campaign.

Farhana Yamin, veteran climate lawyer and former negotiator for the Marshall Islands, told Climate Home that the body of evidence on which the report was based will help “all legal processes, all courts and all tribunals, including, for example, the International Court of Justice (ICJ)” in establishing states’ and companies’ climate obligations.

The Pacific island nation of Vanuatu is leading a call on the ICJ to provide an advisory opinion on the legal obligations of all countries in preventing and addressing the climate crisis.

Although these opinions are not binding and the court has no enforcement power, it could shape climate lawsuits in courtrooms around the world.

“A decision on climate change could be the most authoritative statement to date of the obligations that international law imposes on states to control their greenhouse gas emissions,” writes Michael Gerrard, director of the Sabin Center for Climate Change Law at Columbia Law School.

Mexico’s oil gets even dirtier as flaring continues to soar

Demanding the ICJ’s opinion requires a majority vote at the UN general assembly in September and gathering support from countries is no done deal.

In 2012, the sinking archipelagos of Palau and the Marshall Islands tried and failed to secure a majority for their request, in the face of US opposition.

Ten years later, climate negotiations have yet to deliver finance to victims of climate-related losses. Vulnerable nations are ready to give the judicial route another try.

At the Cop26 climate talks, Antigua and Barbuda and Tuvalu agreed to establish a commission of small island states on climate change and international law. The commission is seeking an advisory opinion from the International Tribunal for the Law of the Sea on the issue.

They hope that a ruling would enable them to sue the most polluting developed countries for the damages caused by climate change, should collaborative finance efforts fail.