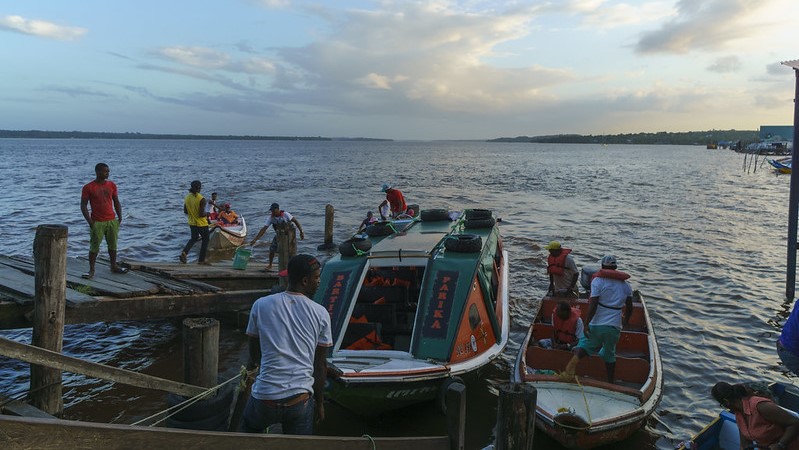 River taxis docked in Bartica, Guyana. Exxon Mobil made one of the largest oil discoveries in recent years in waters off the town. (Photo: Dan Sloan/Flickr)

Obscure international investment treaties could allow oil and gas investors to sue governments for up to $340 billion if climate policies hurt their profits, according to a study in Science.

“It means that money countries might otherwise spend to build a low-carbon future could instead go to the very industries that have knowingly been fuelling climate change, severely jeopardising countries’ capacity to propel the green energy transition forward,” wrote the authors.

Countries have signed thousands of treaties that protect foreign investors from government action.

These treaties allow investors to sue governments for compensation when contracts have been interrupted, drilling permits refused or policies affecting their operations are introduced. They are known as investor-state dispute settlements (ISDS).

The study warns that these treaties create “a chilling effect” on governments, deterring them from implementing ambitious climate policies.

In a major report last month, the Intergovernmental Panel on Climate Change warned that the ISDS mechanism risked delaying the energy transition.

By the end of 2021, there have been at least 231 cases of fossil fuel investors suing a government. Of the 171 that were concluded, a third were ruled in favour of the fossil fuel company and another third were settled.

The latest is that of UK-based company Ascent Resources, which filed a case against the Slovenian government on Thursday for implementing a ban on fracking. The company is already seeking €100m ($106m) in damages after the government demanded it complete an environmental impact study before fracking near a water source.

Another British firm, oil exploration company Rockhopper, is seeking compensation from the Italian government over a ban on coastal oil drilling. In the US, TC Energy, a Canadian company, is seeking $15bn over US president Joe Biden’s cancellation of the Keystone XL Pipeline.

Developing countries, which require most support to transition away from a fossil-fuel dependent economy, are among those facing the greatest potential losses under the dispute system.

Mozambique, which gave the green light to a huge gas development project, tops the list, risking $7-31bn in compensation costs should it change course, according to the study. It is followed by Guyana, home to one of the largest oil discovering in recent years, where $4-21bn is at stake. They are followed by Venezuela and Russia.

A total of 33 governments are vulnerable to claims if they cancel oil and gas projects that are further along in development but not yet producing. Kazakhstan could lose $6-$18bn and Indonesia $3-$4bn.

Analysis: How a tech billionaire is forcing Australia’s coal die-hards to face the future

This is the first peer-reviewed study to estimate the potential costs of investments covered by an ISDS mechanism but it only provides a partial picture.

It is limited to upstream oil and gas projects in pre-production phases. It doesn’t cover coal, operating oil and gas projects, fuel transport infrastructure such as pipelines and LNG terminals, or investments related to projects that cause tropical deforestation – the third largest source of global emissions.

Companies often use complex subsidiary structures to hide the real owner of a firm, which means the estimate of oil and gas production projects that are covered by ISDS are likely underestimated.

In 2020, a study looking solely at the Energy Charter Treaty – the greatest contributor to potential claims – found that member countries faced up to €1.3 trillion ($1.4trn) by 2050 of compensation claims by fossil fuel investors.

The author, Yamina Saheb, used to head the Energy Charter Treaty’s energy efficiency unit and is now one of its most vocal critics.

“It’s a disaster for climate action,” said Saheb, an analyst with thinktank OpenExp. She described the continuation of ISDS mechanisms as “ecocide” and a “neocolonial way to keep control on developing countries”.

Saheb explained that power purchase agreements, which were promoted by the World Bank and other international institutions to provide long-term electricity contracts for developing countries, have locked nations into contracts with investors protected by ISDS mechanisms.

“If the UN secretary general [António Guterres] wants to practice what he preaches, he needs to call for an emergency meeting to cancel all ISDS treaties,” said Saheb. The world’s ability to meet the Paris Agreement goals depend on it, she added.