Macron promises to abandon gas, oil and coal, but will he deliver?

The re-elected French president performed poorly on climate in his first term and is relying too heavily on nuclear, experts say 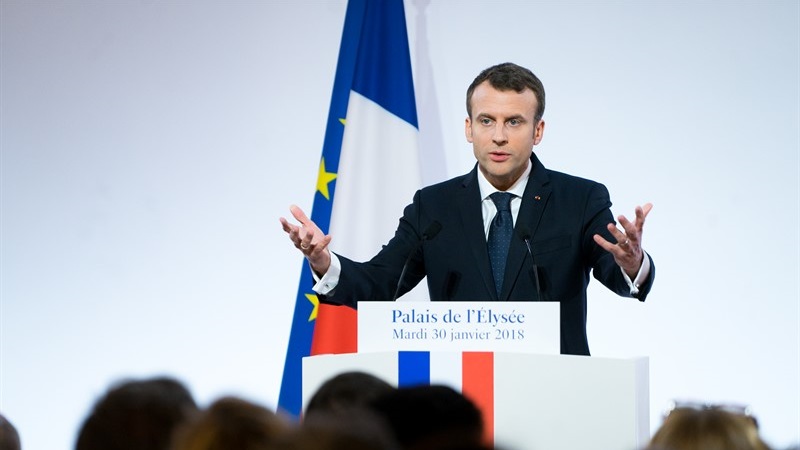 “Making France a great green nation, that is our project,” Macron tweeted on the night of his victory, after he received 58.5% of the votes against 40.5% for Le Pen – a lower margin than in the 2017 election, when he got 66% of the votes.

In the election campaign, Macron declared he would make France “the first major nation to abandon gas, oil and coal.”

While climate advocates are breathing a sigh of relief that Le Pen – who threatened to dismantle wind turbines – lost, Macron’s climate record to date has fallen short of the rhetoric.

Coming to power in 2017 on a promise to “make climate great again”, Macron inherited an underperforming state. France was successfully sued for failing to meet its 2015-18 emissions objectives and is is the only EU member state to have missed its 2020 renewable energy target.

After five years in power, the government remains off track to meet its 40% emissions reduction target by 2030 compared to 1990 levels – a goal which it will need to ramp up to align with the EU’s collective goal of at least 55% cuts.

Macron has said he wants to accelerate the construction of offshore wind farms, develop nuclear power and a large-scale programme to retrofit homes and make them more energy-efficient. But the deployment of renewables and uptake of electric transport has been slow.

France’s weak record on deploying renewables is largely due to administrative hurdles and court challenges, especially for wind farm projects, Nicolas Berghmans, Iddri’s lead European affairs and climate expert, told Climate Home News. The time required for the installation of a wind farm in France is around eight years – significantly higher than in other EU countries, he said.

In 2021, a French court awarded damages to a Belgian couple who claimed that a wind turbine near their house in southern France caused a range of negative health impacts, referred to as “wind syndrome”, including headaches, insomnia and depression.

Construction has started on offshore wind farms “so we should continue to see an acceleration of renewable energy deployment in the coming years,” said Berghmans. 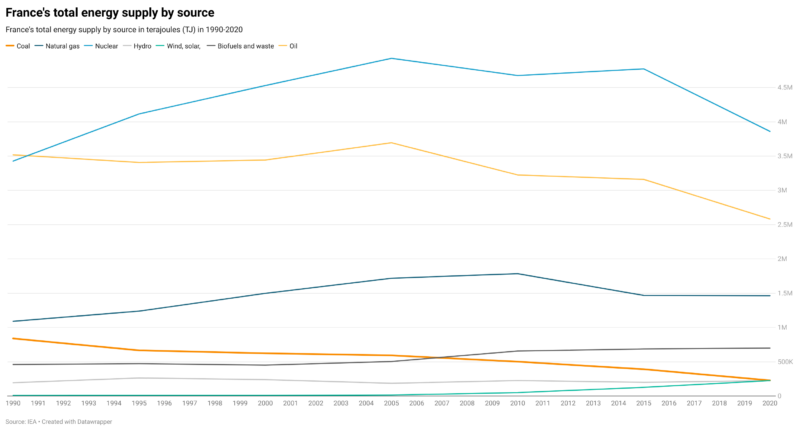 Russia’s invasion of Ukraine has forced many EU countries to reconsider their long-standing opposition to nuclear power as they seek to reduce their dependence on Russian fossil fuels. France has relied heavily on nuclear energy for decades.

The country derives around 70% of its electricity from nuclear energy and is home to 56 nuclear power reactors. In February, the government announced plans to build six new reactors and to consider building a further eight.

Campaigners are not convinced.

Any new nuclear energy project will be expensive and not come online until 2035, said Raphael Hanoteaux, a senior policy advisor on gas politics at E3G. “Solar, wind and storage are already cheaper than nuclear, and will be even cheaper in 12 to 15 years,” he told Climate Home News.

“French politicians are obsessed with the nuclear industry, which diverts attention from real solutions,” Neil Makaroff, EU policy officer at Climate Action Network France, told Climate Home News. “Not a euro of the [coronavirus] recovery plan has been dedicated to renewables. A bad signal.”

“The existing nuclear power plant fleet is quickly ageing, as its underperformance this winter clearly showed, and it is today unlikely that it will be replaced with new reactors with an equivalent generation capacity,” said Berghmans. “Renewable production will have to close this large gap.”

If Macron is to achieve his goal of reducing France’s reliance on Russian fossil fuels, he should focus on transport and housing, Sebastien Treyer, executive director of the think tank Iddri, told Climate Home News.

Enabling access to electric mobility and ensuring large-scale energy efficiency in buildings should be priorities for Macron’s short-term climate strategy, he said.

Electric mobility is on the rise in France, but it is not growing as strongly as in other EU countries, such as the Netherlands and Norway, said Berghmans. This is partly due to delays in deploying charging infrastructure, as well as to insufficient incentives for the uptake of electric vehicles, he said. French citizens rely heavily on cars – with 75% using a car for their daily commute – and investments in cycling and public transport are lagging, he added.

A carbon tax on fuel has been frozen since 2018, when a proposed hike triggered widespread protests and gave birth to the “gilets jaunes” movement.

The country’s citizens’ assembly has identified mandatory minimum energy performance standards for buildings as a key measure to force deep renovation of buildings but this measure has been watered down by the government, said Makaroff.

“Renovation efforts are still timid considering the triple menace of climate change, the cost of living crisis, and the Russia-Ukraine war,” Vallejo said.

“Public support for [this] is still insufficient and poorly targeted to the deep energy renovations that are needed to achieve climate targets,” said Berghmans. The government should offer more solutions and alternatives to poorer households, whose financial balances are directly impacted by rising fuel prices, he said.