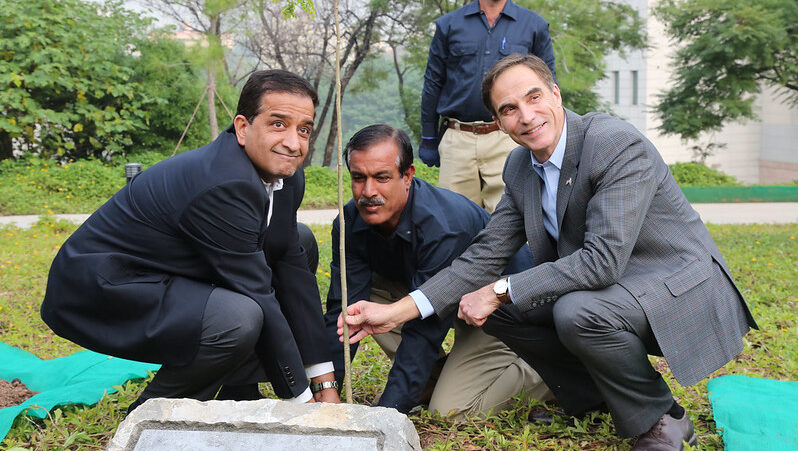 Then climate minister Malik Amin Aslam planting a tree at the US embassy in Pakistan, 2019, to represent the 10 billion tree tsunami (Pic: US Embassy Islamabad/Flickr)

The former cricketing star launched the first phase of the “Ten Billion Tree Tsunami” in 2019 to increase forest cover and mitigate impact of climate change on the South Asian nation of 220 million.

The programme was progressing fast, with 1.5 billion trees planted by March this year against a target of 3.2 billion by 2023, but this could hit a snag. Climate action has not historically been a priority for incoming prime minister Shehbaz Sharif or the parties he will rely on to govern.

Malik Amin Aslam, the former climate change minister under Khan, told Climate Home News the tree-planting programme was not a luxury but a necessity for Pakistan, urging the new government to continue with it.

“Climate change remains oblivious to political circumstances in Pakistan, therefore, projects like these need to be above the political divisions,” Aslam said.

The government had allocated 125 billion Pakistani rupees to the scheme ($680 million), of which around 30 billion rupees had been spent to plant 1.5 billion saplings at 9,500 sites across Pakistan.

“Prime Minister Imran Khan kept the project at the top priority even in Covid-19 times and provided all the required funds for it,” said Aslam. “The initiative has helped develop a green image of Pakistan globally.”

Khan was due to stay in office until August 2023, but an opposition alliance of ten parties toppled his government on Monday 11 April after proving their majority in the parliament.

The country listed the project in its contribution to the Paris Agreement, estimating it would store 500 million tonnes of CO2 equivalent by 2040, if fully implemented. In 2018, national emissions were 489.87 MtCO2e.

“We were in the final stages to secure around one billion dollar [$1 billion] financing for the project from the World Bank under its nature policy based lending,” the ex-minister said. “But this will certainly be at risk now after dismissal of our government.”

Experts have lauded the project as a “game changer” to boost the country’s forest cover and meet international obligations to cut greenhouse gas emissions. They have also demanded an audit of the funds for transparency over how taxpayers’ money has been spent.

“This massive tree plantation scheme is a flagship programme of the outgoing government and it must continue at the same pace to fulfill our national and international commitments,” said Aisha Khan, executive director for Civil Society Coalition for Climate Change in Islamabad.

She said the project had helped increase the country’s forest cover, created green jobs and cracked down on deforestation by the “timber mafia”. This was helping to offset rising emissions from a growing population and industry.

“The new administration should try to plug loopholes in the scheme to further strengthen it like identification of appropriate tree species for specific areas and soils before the plantation drive,” she suggested, and present the project at international forums to secure green financing. “This is a project of national importance and [should] hence be owned by each political party irrespective of their position in the parliament.”

The project was “an excellent step in the right direction” but required transparency and a complete audit of its funds, said Ali Tauqeer Sheikh, climate change expert and former chief-executive of think-tank LEAD Pakistan.

“There is no city wise data available on allocation, utilisation of funds and subsequent tree plantation,” he said, raising questions over the previous government’s data on afforestation and emissions.

Khan’s party piloted the tree tsunami initiative in Khyber Pakhtunkwa province in 2014, where WWF judged it an environmental success but many complaints of corruption were raised.

“The new administration should have a financial audit of the project to unearth embezzlement in it, if any,” Sheikh said. “And then try to achieve a national ownership for the scheme which remained missing during the previous government.”

Former climate change minister Aslam insisted the project was “completely transparent” and the new government should not try to “reverse or slow down” the initiative.

“The project is globally acknowledged, and it’s designed for Pakistan’s climate compatible future,” he added.