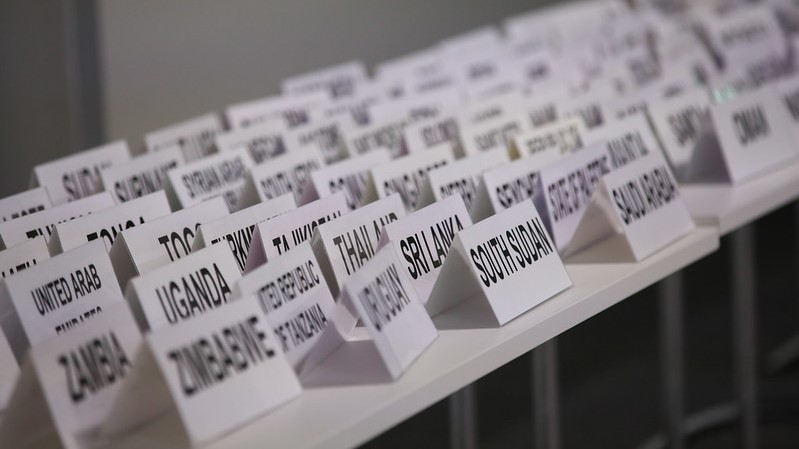 National flags outside a negotiating room at the Cop26 venue (Pic: Kiara Worth/UNFCCC)

Many governments would be expected to submit more ambitious climate plans by the end of 2022, under a draft Glasgow agreement published on Friday morning.

The document, which is an updated version of an earlier proposal, recognises that national pledges to date are insufficient to hold global warming “well below 2C” and aiming for 1.5C, the goals agreed in Paris.

The text “requests parties to revisit and strengthen the 2030 targets in their nationally determined contributions as necessary to align with the Paris Agreement temperature goal by the end of 2022.”

“This is definitely a stronger and more balanced text than a few days ago,” Helen Mountford, vice president for climate and economics at the World Resources Institute (WRI), said in a press briefing.

“It maintains the language around coming back to revisit and strengthen targets in 2022. Setting a time frame around that is absolutely essential to putting us on a path that will accelerate action,” said David Waskow of the World Resources Institute.

There was a flurry of debate over whether the verb used – “requests” – was stronger or weaker than “urges” in the previous draft. A Cop26 presidency official said “requests” was stronger and in line with language in the Paris Agreement.

It is all subject to change as Cop26 talks reach their endgame. Experts said many elements of the draft would breach countries’ red lines, requiring negotiators to call their capitals and seek a mandate to compromise.

The proposal reflects the urgency of the situation and the need for a rapid increase in ambition, the WRI experts said. The latest pledges for action this decade set the world on track for 2.4C of warming, according to analysis published by Climate Action Tracker this week.

The text states that different national circumstances will be taken into account. “That is helpful for the most vulnerable, least developed countries who are simply not in a position to revisit and strengthen [their targets]. This needs to be aimed at the largest emitters,” Waskow said.

However, big emerging economies are resistant to being held to the same standard as the rich countries responsible for the majority of historic pollution.

In a stocktaking plenary on Friday afternoon, China’s environment minister Zhao Yingmin said countries should be allowed “space and time” to implement their climate targets.

Bolivia, speaking for the like-minded developing country grouping, stressed the principle of common but differentiated responsibility: rich countries should act first and fastest.

A space is opening up to discuss oil and gas exit at Cop26. Lobbyists are pushing back

Language around phasing out coal and fossil fuel subsidies remains in the second draft, with more caveats. It calls for the phase out of “unabated” coal power and of “inefficient” subsidies for fossil fuels.

The new language could help some countries that try to keep fossil fuel subsidies for low-income households, but it could also allow polluters to retain subsidies, the WRI experts said.

“The key line on phasing out coal and fossil fuel subsidies has been critically weakened, but it’s still there and needs to be strengthened again before this summit closes. That’s going to be a big tussle and one we need to win,” Greenpeace’s Jennifer Morgan said.

Strong pushback is expected from countries like Australia and Saudi Arabia.

For others like India, acceptance of strong language on cutting emissions will be conditional on clearer commitments by rich countries to scale up climate finance. The draft text “notes with deep regret” that a target to mobilise $100 billion a year by 2020 has not been met.

“With every year of delay in climate action, we are reducing the available carbon space for developing countries to grow,” said Arunabha Ghosh, head of Delhi-based think-tank CEEW, in an emailed statement.

“If developed countries are serious about the climate crisis, they need to fulfil past promises and rapidly scale up support for loss and damage. The delivery of $100 billion can also no longer be delayed.”