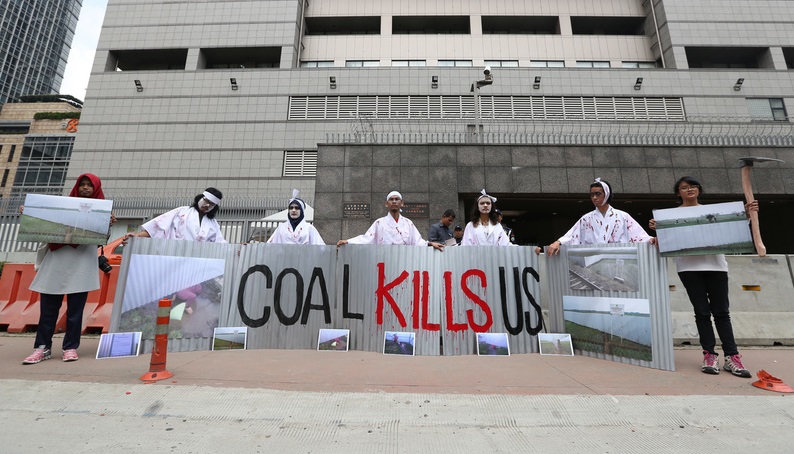 The G7 group of rich nations has agreed to start phasing out fossil fuel finance overseas and end support for unabated coal power to keep the 1.5C goal in sight.

Following a two-day virtual meeting, climate and environment ministers from the UK, US, Japan, Canada, Germany, France and Italy agreed to enshrine the tougher goal of the Paris Agreement as the benchmark for climate action.

In a communique published on Friday, ministers said “investments in unabated coal must stop now” and committed to “an absolute end to new direct government support for unabated international thermal coal power generation by the end of 2021”.

“This commitment, I believe, sends a clear signal to the world that coal is on the way out,” said Cop26 president designate Alok Sharma.

Last week, Sharma said the Cop26 climate talks in Glasgow in November had to be the moment the world “consigns coal to history“.

Ministers also agreed to phase out direct government support for carbon intensive fossil fuel projects overseas “except in limited circumstances at the discretion of each country” and in a way which would “keep 1.5C within reach”.

US special envoy for climate change, John Kerry, said this was the first time G7 nations “have unified and been able to come up with a public statement on 1.5C”. He praised Japan for taking “important steps to find unity on the road ahead”.

After initially resisting language on ending coal finance, Japan came on board with the group of major economies, sending a strong signal of the accelerating shift away from coal across Asia. The move leaves China isolated as the last major funder of coal projects overseas.

Comment: What the IEA net zero roadmap means for businesses and governments

The breakthrough on ending coal finance comes just days after the International Energy Agency found that investments in new oil and methane production as well as unabated coal power need to end this year for the global energy sector to reach net zero emissions by 2050.

“None of us want any more new coal-fired power plants to be built in the world and we do not want to finance such projects any longer,” Germany’s environment minister Svenja Schulze told a press conference.

Governments committed to work to cut emissions towards “overwhelmingly decarbonised power systems in the 2030s” but added that methane gas “may still be needed during the clean energy transition on a time-limited basis”.

Neither the UK, US nor Germany explicitly ruled out making new investments in oil and methane gas during a press conference following the virtual meeting. The UK has recently green lighted a new round of oil and gas permits in the North Sea. In Canada, fossil fuel expansion has led emissions to rise since the Paris Agreement was signed in 2015.

“It’s 1.5C that governs the choices that we have to make over the next 10 years. Different countries will have different moments when to make which cuts, but the market is already moving in that direction,” Kerry said.

Dave Jones, senior electricity analyst at the UK-based think tank Ember, said ending coal power was “the essential first” to decarbonise the power sector by 2035 but it had to be followed up with a gas power phase out.

Ministers said they were “working intensively to increase the quantity of finance for climate mitigation and adaptation actions” but left to finance ministers and leaders, who are meeting next month, the task to quantify how much cash they are ready to put on the table.

The UK has made scaling up climate finance a core pillar of its G7 presidency and its ability to leverage other major economies to commit to new finance pledges will be seen as a critical test of its diplomacy.

Earlier this year, UN secretary general António Guterres called on G7 nations to double their climate finance commitments at the leaders summit in Cornwall, UK, next month. So far, only the UK and the US have committed to do so.

“Ensuring that developing countries have access to public finance now to fight the triple crises of Covid-19, debt, and climate is absolutely necessary,” she said.

And rich nations are yet to mobilise $100bn a year to help developing nations cut their emissions and cope with climate impacts. The UN estimates developed countries remain $20bn short of the goal.

Jennifer Tollmann, senior policy advisor at think tank E3G, said the meeting was “a step change from the last four years and lays the foundation for the G7 to become an engine for keeping 1.5C in reach”.

She warned that G7 countries must bridge a “significant solidarity gap” as they meet again next month and reach an agreement on ramping up climate finance, ensuring vaccines for developing countries and phasing out all funding for overseas fossil fuel projects. These, she said, have emerged as “clear credibility tests going into the June G7 summit”.