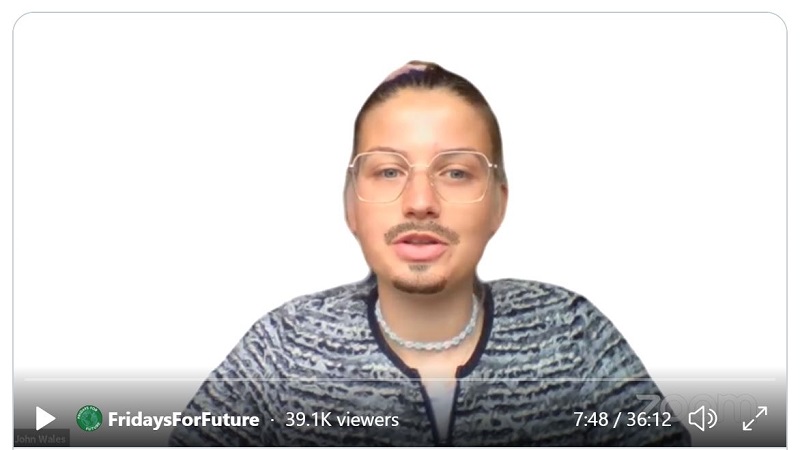 A youth climate activist pretends to be Standard Chartered's CEO, in a campaign stunt to put pressure on the bank to change its fossil fuel lending policy (Photo: Fridays for Future/Twitter)

Armed with fake moustaches, a mockup corporate website and the support of prominent climate campaigners, youth activists are putting pressure on Europe’s biggest coal backer to close the loopholes in its fossil fuel lending policy.

In an elaborate prank, campaigners from Fridays for Future spotlighted Standard Chartered’s ongoing support for coal, oil and gas, and accused the UK bank of “greenwashing”.

The day before Standard Chartered’s annual general meeting, the activists issued a fake press release announcing the bank would end all funding for coal-fired power plants by the end of the year and support for fossil fuel infrastructure by 2023. In addition, the bank would provide recovery payments to communities that had been most affected by the coal projects it had financed.

“Too good to be true?” tweeted some of the world’s most prominent climate campaigners, including Bill McKibben, Greta Thunberg and Vanessa Nakate, who all appeared to be in on the joke.

During a staged press conference, promoted as the moment the bank would reveal its new lending policy details, young women activists, with drawn-on moustaches and beards, ironically acted out Standard Chartered’s leadership team.

“Standard Chartered is not yet taking direct step towards a legacy that we can all be proud off,” said July Gamble, playing the role of media relations officer for the bank she described as “no Standard Chartered”.

As they wiped off their moustaches, the campaigners said the stunt aimed to show they would continue to put pressure on Standard Chartered until it meets their demands.

“The biggest prank of all is how Standard Chartered are ‘here for good’,” said one campaigner, referring to the bank’s slogan.  “We want them to realise what a big joke their lending policy is,” she added.

Under its current energy lending policy, which was updated earlier this year, the bank has committed to stop providing direct financial services towards the construction and expansion of coal-fired power plants.

From 2024, it will stop supporting companies with a share of thermal coal earnings exceeding 80%, tightening the threshold to exclude companies dependent on coal for more than 5% of their earnings in 2030.

According to NGO Urgewald, the effect of the policy on the bank’s portfolio will only become visible from 2027, when the threshold will be lowered to 40%.

Power Finance Corp (PFC) in India, Top Frontier Investment Holdings in the Philippines and Adani, the multinational conglomerate behind the Carmichael mega mine in Australia, are among coal developers that have received support from the bank.

“Private financial institutions cannot hide behind the assumed political will for new coal anymore. If Standard Chartered wants to be here for good, it needs to sharpen its coal policy. Dropping coal plant developers is the most urgent step,” said Katrin Ganswindt, head of financial research at Urgewald.

“We are in a climate crisis. My country, the Philippines, is already experiencing the worst impacts. I am sick of being afraid of drowning in my own bedroom,” climate campaigner Mitzi Jonelle Tan told the press conference.

“We are not just us, it is the whole Fridays for Future movement” that will campaign for Standard Chartered to change its fossil fuel lending policy, she added.

A spokesperson for Standard Chartered declined to comment on the campaigners’ tactics but said the bank had made “major strides” in its coal policy over the past few years and continues to review its position.

“We intend to remain leaders in articulating a path to net zero by 2050. We are committed to detailed transparency on our transition strategy and plan to put it to a shareholder advisory vote in 2022,” they added.