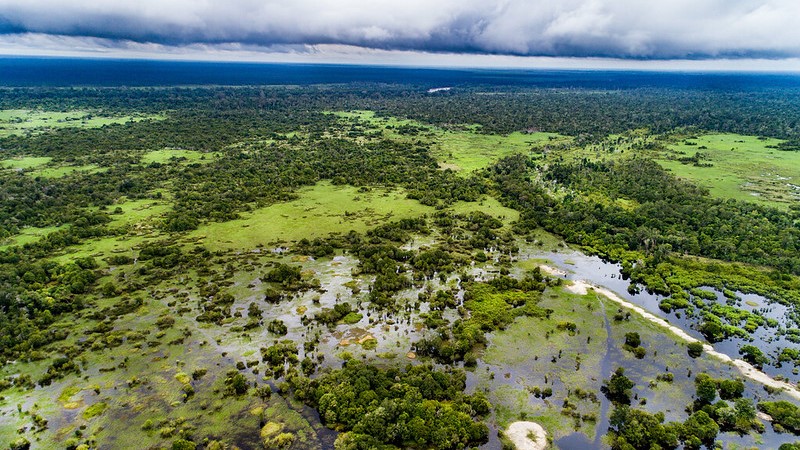 Peatland forest in Central Kalimantan, Indonesia, where the government is drafting regulation to sell carbon credits to companies to protect its ecosystems (Photo: Nanang Sujana/CIFOR/Flickr)

As Mark Carney presented the world’s top political and business leaders with a blueprint to scale up the voluntary carbon market on Wednesday, campaigners warned key criteria to improve environmental integrity were missing.

At the annual meeting of the World Economic Forum, Carney, the UN special envoy for climate action and finance, presented the recommendations of a private sector-led taskforce to respond to an anticipated boom in demand for carbon offsets.

The final report, which was still being designed on Wednesday morning, was not circulated to taskforce members before the launch, contrary to expectations they would be briefed ahead of the event.

“The voluntary carbon offset market… is complementary to companies’ efforts to reduce absolute emissions… [that] only then look to offset,” Carney told the World Economic Forum. The market would help “maximise” the use of the world’s remaining carbon budget to meet its climate goals, he said.

He described the market as “catalytic” to finance projects in emerging and developing economies and “breakthrough technologies” as well as harnessing “potential enormous co-benefits” for biodiversity for example. “It is one piece of the puzzle. We do need this market.”

Chaired by Bill Winters, group chief executive of Standard Chartered, and sponsored by the Institute of International Finance (IIF), the taskforce includes some of the world’s most polluting companies: airline easyJet, plane manufacturer Boeing, oil giants BP, Shell and Total, and steel producer Tata Steel. No green groups are represented among its members.

With carbon neutrality pledges becoming the benchmark for climate ambition, businesses around the world are looking to offset the emissions they cannot cut and for cheaper ways to meet their climate goals.

Offsets allow companies to compensate their emissions by financing a carbon-cutting projects, often in developing countries, such as tree-planting, ecosystem restoration, energy efficiency or waste management.

Demand has risen rapidly in the past two years and is expected to soar in the near future. The taskforce forecasts supply of carbon credits will need to increase 15 fold between 2019 and 2030 to keep up.

Its report identified ways to bring coherence to what is currently a fragmented market. But it said little on how to ensure projects financed through the market deliver genuinely additional emissions reductions.

“The question is what are we scaling? And what do we mean by offsetting?” Owen Hewlett, chief technical officer at Gold Standard, one of the main certifiers of voluntary carbon market projects, a taskforce member, told Climate Home News.

“If you scale a bad thing, it doesn’t matter how big you make it, it’s still bad. And I still don’t feel like the definition of offsetting is entirely clear,” he said. “I find that fairly astonishing. We’re trying to scale this specific instrument that we haven’t defined.”

The taskforce said the recommendations were “the beginning of a longer process”. In consultation with other groups, it would work to establish core carbon principles and quality standards and provide guidelines on how and when companies should use offsets.

It recommended the creation of a governance body that could oversee the implementation of quality benchmarks, such as excluding old projects where verification is no longer possible, for example.

The initiative is already facing a backlash from climate campaigners, who warn it could give polluters a free pass.

An open letter to Carney signed by 47 researchers, academics and campaigners ahead of the launch accused the initiative of trying to “minimise the cost of compliance for private corporations” at the cost of environmental integrity.

Agustin Silvani, senior vice president of conservation finance at Conservation International, said the taskforce recommendations were “on the right path” but there was “a long way to go” to narrow down what constitutes a quality offset.

“The role of civil society is to continuously be pushing the market higher for quality,” he said.

One concern is how to avoid double counting, with the company and host country both taking credit for emissions cuts. Campaigners stressed that the taskforce should not be allowed to set the rules on this issue.

For Hewlett, an independent process driven by civil society should define what constitute a quality offset to avoid the private sector self-regulating. This, he said, would be an opportunity to think more holistically about the type of projects to back.

In the US for example, organic soil carbon sequestration credits are in high demand, but quality offsets should drive sustainable agricultural practices that ensure food security and protect biodiversity as well as storing carbon, Hewlett said.

“The taskforce isn’t articulate, or nimble enough to have thought that way,” he added.

To cut emissions to net zero, the taskforce urged a significant increase in the proportion of  projects which remove or sequester carbon in trees and soils.

Such nature-related projects “often have high co-benefits for nature and society such as positive impact on surrounding biodiversity, water quality, soil quality, and livelihoods,” it added.

But while these solutions have a considerable role to play in meeting climate goals, sequestrating carbon in ecosystems should not replace real emissions cuts, said Frédéric Hache, executive director of NGO Green Finance Observatory.

“We need to sequester past emissions that are already in the atmosphere whereas offsetting by definition is about future emissions. The whole point of an offset is that an entity keeps emitting. There is a striking lack of binding and credible measures to actually prioritise emissions reductions,” he said.

For Katie Kedward, economist and policy fellow at Institute for Innovation and Public Policy, the biodiversity co-benefits that result from the voluntary carbon market are “a strong assumption” with no evidence offsets help enhance biodiversity and ecosystem health.

“It’s important not to forget the huge flows of finance currently facilitating the drivers of biodiversity loss,” she said, warning against the market being perceived as an adequate substitute to conservation.

She urged the taskforce to develop “robust standards” on multiple ecological criteria, including biodiversity protection, rather than on carbon alone.