At a summit of least developed countries, leaders said they needed aid to overcome climate disasters and put ambitious climate plans into action 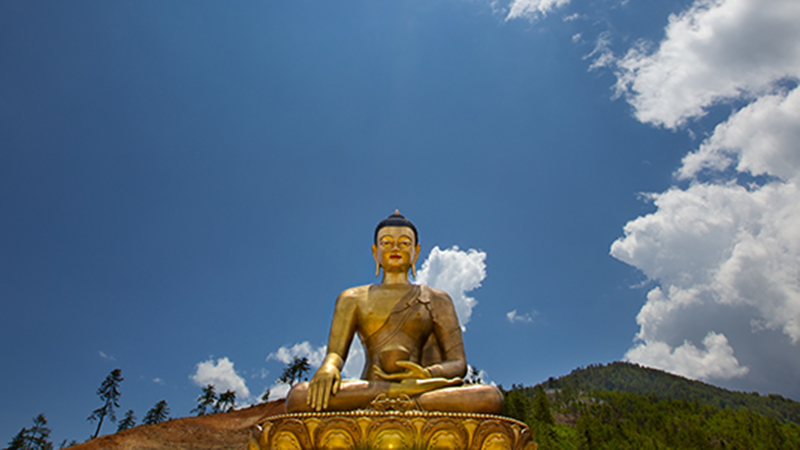 Bhutan's giant Dordenma Buddha, which towers over Thimphu, is one of the largest in the world (Flickr/ Michael Foley)

The world’s poorest countries have called on rich nations to provide more financial aid to help them adapt to climate change and recover from disasters such as flooding, typhoons and drought.

At the Thimphu ambition summit on Wednesday, members of the least developed countries (LDC) group set out how they were trying to show leadership but needed support to put their plans into action.

In a national submission to the UN the day before the summit, Nepal announced that it aims to achieve net zero emissions by 2050, by investing in renewables, electric transport and reforestation. Adaptation will be  a “constant requirement” for the country due its vulnerability to climate change.

The mountainous country, which has among the lowest carbon emissions per capita in the world, is highly vulnerable to the impacts of climate change. Himalayan glaciers in Nepal have been losing almost half a metre of ice each year since the start of the century and floods and landslides are common. By 2030, the country aims to have adaptation plans in place in all its 753 municipalities.

Achieving those goals depends on international climate finance, said the country’s forest and environment minister Shakti Bahadur Basnet. “The scale of climate finance must grow to meet the needs of the most vulnerable,” he said.

That call comes ahead of a virtual climate summit to be attended by more than 70 heads of state on 12 December, marking the five-year anniversary of the Paris Agreement. While many leaders are expected to tout upgraded carbon-cutting targets, there has been little sign of new money.

In 2009, rich nations agreed at UN climate talks to mobilise $100 billion a year by 2020 to support poor countries combat the impacts of climate change. But there remains a funding shortfall.

Climate finance provided to developing countries rose by 11% to $78.9 billion in 2018, according to the Organisation for Economic Cooperation and Development.

“We need developed countries to fulfil their climate finance commitments. That includes the decade-long goal of mobilising US $100 billion a year for mitigation and adaptation. We are not there yet,” UN chief Antonio Guterres said at the Thimphu summit.

Guterres urged donor governments and development banks to commit to directing at least 50% of their climate finance towards adaptation and resilience before Cop26 next year. “Until now adaptation represents only 20% of climate finance, reaching only $30 billion on average in 2017-2018,” he said.

UK energy minister Alok Sharma told the summit that he was “totally committed to the $100 billion climate finance goal.” He added that as Cop26 president-designate he aimed to make finance “much more accessible and to champion locally led adaptation”.

Last month the UK government cut its overseas aid budget from 0.7% to 05.% of national income from next year. Money earmarked for climate projects was protected from the cuts, but the move was criticised by poorer nations, many of which are facing crippling debt following the coronavirus pandemic.

Despite the disruption brought by the Covid crisis, 38 of the poorest countries are preparing to submit new or improved climate plans for this decade, or have done so already. Many place a strong emphasis on adaptation.

Rwanda was the first country in Africa to submit its new plan to the UN, in May. Rwanda said it would need around $11 billion to achieve its goals, including $5.3 billion for adaptation measures across seven sectors.

“Our country is already counting the cost of climate change. We have already tragically lost more than 140 citizens and more than 3,000 homes due to floods and landslides this year alone,” said environment minister Jeanne d’Arc Mujawamariya.

At the Thimphu summit, named after the capital of Bhutan which chairs the LDC group, poor countries also called for more loss and damage finance to help them recover from climate disasters. There has been a “staggering” rise in climate disasters over the past 20 years, which have led to global losses of $2.97 trillion, according to the UN.

In 2013 the Warsaw International Mechanism was set up to address loss and damage, but rich countries have resisted calls to put money behind it.

Sharma agreed: “We hear your call to the world: to increase its focus on averting, minimising and addressing loss and damage.”