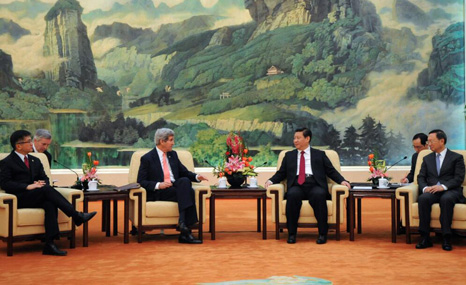 Xi was speaking during the visit of US secretary of state John Kerry to Beijing, where he said more cooperation was needed between the two countries on energy efficiency and emission reduction measures.

“It is not at others’ demand but our own will. We have already taken many measures and will do more in the future,” state media agency Xinhua quoted Xi as saying.

China and the USA are jointly responsible for around 42% of annual greenhouse gas emissions. Neither country currently has accepted any legally binding carbon reductions, but both say they are committed to a proposed UN climate deal set to be signed in 2015.

A senior State Department official says Kerry believes that it is critical that the US and China work together on the issue, given that they are the world’s two largest emitters of carbon.

His six-day visit to Asia, including two days in the Chinese capital, will see Kerry highlight the importance of US-China collaboration on climate change and clean energy, according to a spokesperson from the Department of State.

“He will want to discuss both practical steps that we can take as well as ways that the U.S. and China can effectively cooperate as part of the global effort,” said the official, adding that the meetings would build work done during a visit to China in April 2013, where Kerry launched a High Level Climate Change Working Group.

Before the trip, Kerry tweeted that climate change would be “a major theme” during his trip.

He announced that he had met with Todd Stern, the US special envoy for climate change, who represents the country in negotiations at the UN, which is trying to sign off a global treaty to reduce greenhouse gas emissions. Stern accompanied Kerry on his visit to Seoul in South Korea yesterday.

After two days in Beijing, Kerry will visit Jakarta in Indonesia, where he is expected to deliver a speech on climate change, based on the “substantive conversations” he has had in China. Indonesia, an archipelago with over 17,000 islands, is extremely vulnerable to the impacts of global warming.

Cooperation between China and US will be key to achieving a meaningful climate change treaty, which the UN hopes to secure in Paris in 2015. Together, the countries are responsible for 45% of global carbon dioxide emissions, and have the largest GDPs.

While both China and the US have affirmed that they are keen to act on climate change, tensions remain in how they want to approach the problem at the global scale. Greater understanding between the two countries will help to ease the strain when it comes to signing off this international deal.

At the UN climate talks held in Warsaw in November 2013, the US argued for a flexible agreement that would bind all countries equally, while Chinese negotiators said the new treaty should take into account the historical responsibility of countries like the US for the problem of climate change.