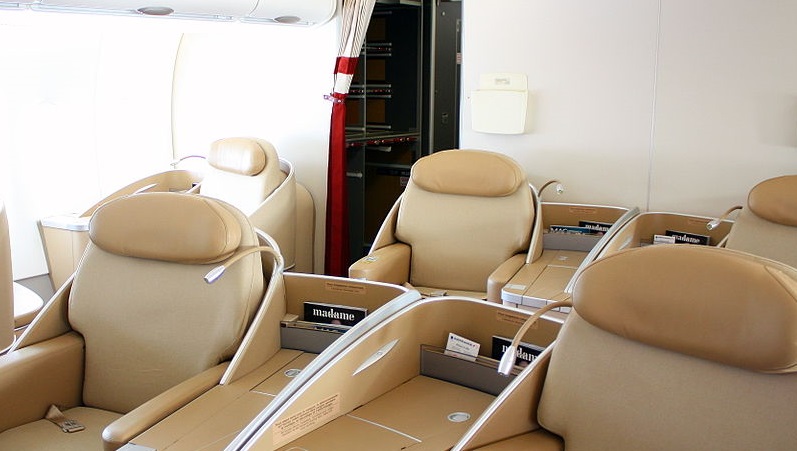 A small minority of people take most of the world's flights (Pic: Andy Mitchell/Wikimedia Commons)

A citizens’ assembly has called on the UK government to make those who fly more pay more and to ban polluting private jets and helicopters.

Those were among the more radical proposals in a package of recommendations on how to decarbonise in a fair and socially acceptable way.

“[The assembly members] came out most strongly in favour of taxes on air travel which increase, not only as people fly further, but also as they fly more often,” said Jim Watson, one of the assembly’s expert leads.

The 108 members of the Climate Assembly represent a cross-section of the British public. They were invited by lawmakers to work out how the UK can reach its target of net zero greenhouse gas emissions by 2050.

A 32-year old assembly member called Chris from Oxford said the assembly was “a complete representation” which was a surprise and really “refreshing”. He said: ” I’ve spoken to people for who it’s a complete crisis – to complete denial or don’t believe it’s a real thing, that end of the spectrum.”

After hearing from experts at six weekend sessions in 2020, the assembly members developed proposals to slash emissions in every sector of the economy. The chairs of six parliamentary committees wrote to prime minister Boris Johnson, urging him to act on the report.

In the letter, they said: “We believe that their work merits a response and subsequent action. We therefore urge the Government to consider carefully the recommendations in the report and ask that you publish a response before the end of the year.”

Air travel accounts for 7% of UK emissions and is one of the hardest sectors to decarbonise. Passenger demand is expected to grow, in the absence of policy intervention.

Assembly members said the government should even out the cost of air travel compared to the alternatives. In the UK, domestic flights are often much cheaper than travelling by rail.

One way the assembly said the government should do this is by taxing frequent fliers. This proposal was supported by 80% of assembly members.

A frequent flyer levy has previously been suggested by the government’s official advisory body, the Committee on Climate Change. The government then said it would consider the recommendation.

There are currently no taxes for frequent fliers anywhere in the world and most countries do not tax flights at all.

According to Leo Murray, director of innovation at green NGO ‘Possible’, the assembly’s support showed that frequent flyer taxes were popular with the general public and were therefore “politically deliverable”.

Frequent flyer levies are fairer and more popular than flat taxes on flying, said Murray. “The public is not going to get behind a solution that means ordinary people are unable to take an annual family holiday or see family abroad.”

A 2014 study found that, in the UK, 15% of the British population took 77% of all the flights. The same study found just 41% of Brits had flown in the last year. Murray said air travel was similarly unequal in most other countries – both in the Global North and South.

Most of British society’s elite – newspaper columnists, parliamentarians and chief executives – are among the frequent fliers, Murray noted. This, rather than the public’s view, is the real barrier to change, he said.

Andrew Murphy, aviation manager at the Transport & Environment NGO, agreed that a frequent flyer levy would be popular. “It certainly fits the political mood at the moment which is to increasingly draw attention to that small percentage of the population which are responsible for a large amount of flying,” he said.

He agreed with Murray that those who fly the most should pay the most. But, he said, a frequent flyer levy would be difficult to implement and simpler policies should be prioritised.

One of the challenges of a frequent flyer levy, he said, would be keeping track of how many times people have flown.  The UK has no ID cards and people often have more than one email address, passport and credit card, so could find ways to dodge the tax.

It would require foreign airlines to cooperate with the UK authorities and raise the question of whether UK residents pay it or just UK citizens. Less wealthy people who have a particular reason for needing to fly often would also be penalised, he said.

Murphy said the most important thing governments can do to limit the climate impact of aviation is to stop expanding airports. The UK government is trying to expand London’s Heathrow Airport, despite a long-running legal challenge.

Murphy also said aviation fuel should be taxed. “We’re jumping all the way to a frequent flyer levy at a time when jet fuel remains completely untaxed,” he said. “Why jump by the more known type of tax? Let’s do that one first.”

Airport expansion and jet fuel were not mentioned in the Climate Assembly’s report.

Other recommendations from the Climate Assembly included scrapping incentives to fly like air miles, and a ban on polluting private jets and helicopters. A passenger on a private jet in Europe is responsible for around ten times the emissions of the same journey made by economy class.

Murray supported this recommendation and added that, for technical reasons, electric air travel is more feasible for private planes than public ones. This is because they usually travel shorter distances and with fewer people.

Corsia is set to give airlines a free pass until 2023 and has been widely criticised by environmental campaigners.