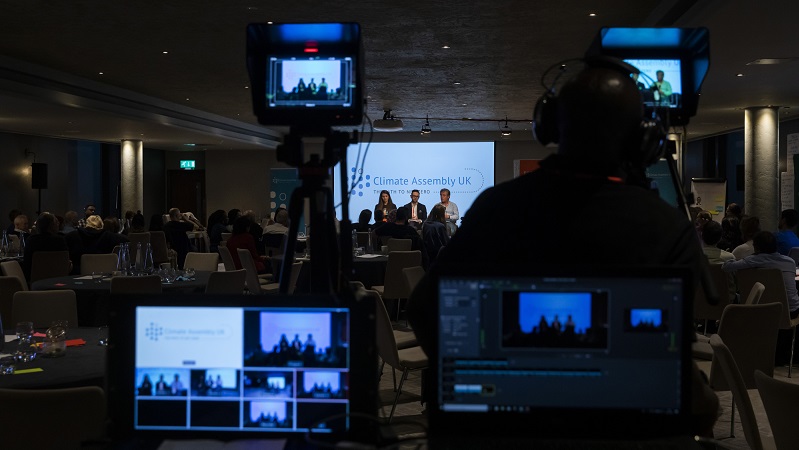 Citizens Assembly in France and the UK are moving online amid lockdowns to fight the Covid-19 pandemic. (Photo: Climate Assembly UK)

As governments mull over multi-billion packages to weather the economic impacts of the coronavirus pandemic, citizens’ assemblies could have a role to play in shaping a green recovery.

In France and the UK, citizens’ assemblies set up to make climate policy recommendations have moved online to continue their work amid restrictions to contain the spread of the virus.

Both countries are among the worst affected by the pandemic. More than 15,700 people have died in France and 12,100 in the UK as of Thursday, according to the World Health Organisation.

France’s citizens’ assembly was launched following “yellow vest” protests that were sparked by a 2018 hike in fuel tax. It was tasked to come up with measures to reduce the country’s emissions at least 40% by 2030 from 1990 levels “in a spirit of social justice”.

Its 150 members, drawn from a cross-section of society, met in person over five weekends starting in October 2019. Then Covid-19 hit and the authorities ordered people to stay home and avoid non-essential journeys.

Undeterred, the citizens assembly took its penultimate session online over two days at the start of April. The agenda was adapted to discuss the economic and social consequences of the coronavirus pandemic and how recovery measures could support climate action.

Following its online session, the assembly decided to send 50 of the 150 propositions it is working on to the French government, in the hope of influencing the Covid-19 recovery plan.

The propositions, obtained by Climate Home News, were not made public as they still need to be voted on at one last session.

Some of the French assembly’s draft proposals

The assembly warned the French government not to repeat the mistakes made after the 2008 financial crisis, which saw investments in carbon-intensive and fossil fuel industries.

Instead, it urged the government to ensure investments made as part of the recovery effort are “socially acceptable” and benefit green solutions and the energy transition.

It called for recovery measures to prepare for “a different social and economic model, that is more human and more resilient in the face of future crisis” by reducing France’s dependence on imports, boosting jobs and reducing emissions.

Laurence Tubiana, co-president of the assembly’s governance committee and a key architect of the Paris Agreement, praised the assembly members for their patience in taking their work online.

“Sometimes the organisation of our citizens’ assembly for the climate is like crossing the Amazon without a map,” she said.

The UK’s assembly is also moving online to continue its work to draw up measures for the UK to achieve net zero emissions by 2050.

The last of four weekends due to be held at the end of March was cancelled following the coronavirus outbreak. Instead the 110-member assembly will split its final work across three weekends of virtual Zoom meetings, starting 18/19 April and finishing 16/17 May.

Sarah Allan, of Involve, a public participation charity commissioned by the UK Parliament to facilitate the assembly, said members were keen to finalise their work despite Covid-19 restrictions.

Test calls were held with all participants to ensure everyone was able to navigate the online meeting software. Two people had to take a break after being affected by coronavirus. One other member has been suffering from medical issues not related to Covid-19.

“But nobody has dropped out or doesn’t want to take part anymore,” Allan said.

The UK assembly’s final sessions will focus on electricity generation, negative emissions technologies to remove carbon from the atmosphere and finalising its recommendations. Speakers and experts have pre-recorded presentations to be discussed in smaller break-out groups.

Assembly members will also be given the opportunity to discuss the impact of the pandemic. Allan said the assembly’s experts were still discussing how best to approach the issue.

“We are talking almost weekly with the French assembly,” she said.

According to a survey by pollsters Opinium, 48% of the British public agrees the government should respond “with the same urgency to climate change as it has with Covid-19” – 28% of respondents said it shouldn’t.

The model for holding citizens’ assemblies, even at times of crisis, has gathered international interest.

“I have emails in my inbox from Canada and Australia wanting to talk about how we are holding the assembly online,” said Allan.

But the pandemic has also stopped some assemblies in their tracks.

Teresa Ribera, Spain’s vice prime minister and minister for the ecological transition, told Climate Home News the launch of the country’s citizens’ assembly on climate change had had to be postponed.

“We realised that it didn’t make much sense to start working on this in a moment when we have stated the importance of social distancing,” she said. “But all the preparatory work was done so we will be in a position to launch it as soon as the general circumstances allow us to do so.”