In concessions to Russia, the International Maritime Organisation has watered down draft rules to protect the Arctic from oil spills and black carbon pollution 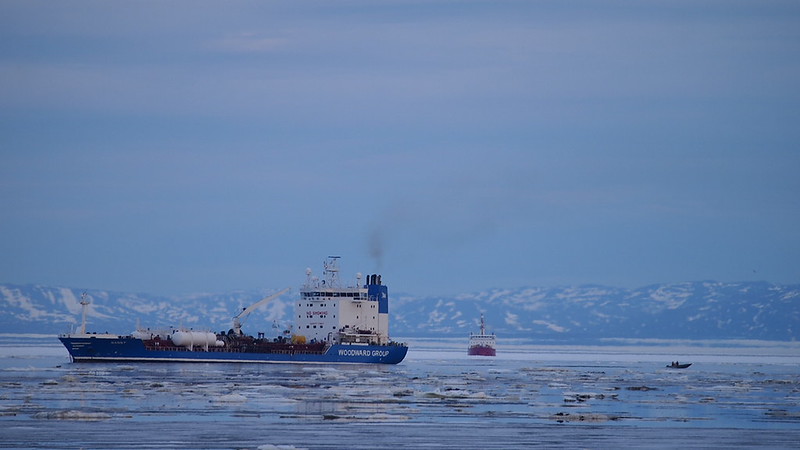 An oil tanker and an ice breaker in northern Canada. (Photo: Fiona Paton/Flickr)

A proposal to curb ship pollution in the Arctic, weakened to suit Russian interests, would delay meaningful action until the end of the decade, researchers have found.

Under draft plans being negotiated at the International Maritime Organisation (IMO) – the UN body responsible for international shipping – restrictions on heavy fuel oil (HFO), a dirty fuel which propels most of marine transport, would come into effect in July 2024.

But a host of exemptions and waivers would allow most ships using and carrying HFO to continue to pollute Arctic waters until 2029.

“That is much too long to wait to take action to protect the Arctic,” Bryan Comer, senior marine research at the International Council on Clean Transportation (ICCT), told Climate Home News.

In a study published on Thursday by ICCT, Comer and his co-authors estimated that if the draft ban had been in place in 2019, around three-quarters of the fleet using HFO would have still been allowed to carry and use the fuel in the Arctic.

As the Arctic fleet grows, so will the number of ships that qualify for an exemption, “and the effectiveness of the ban would be further eroded,” the study’s authors warned.

For the Clean Arctic Alliance, which campaigns to ban HFO use in the Arctic, the proposal will allow “business as usual for most shipping operators in the region, and could fuel a race towards lower safety standards”.

When burned, HFO emits black carbon, a short-lived pollutant that absorbs sunlight and traps heat in the atmosphere, contributing to global warming. The Arctic, which is already warming twice as fast as the rest of the world, is particularly sensitive to these emissions.

Burning and carrying HFO has been banned in Antarctic waters since 2011, but plans for similar restrictions in the resource-rich Arctic have met with resistance. Russia, which could benefit from the opening of more shipping routes in the region as Arctic sea ice melts, is one of the most vocal opponents.

In the absence of regulation, HFO use in the Arctic is rapidly increasing. Between 2015 and 2019, its use by oil tankers rocketed by 300%, according to the ICCT.

Finland, Germany, Iceland, the Netherlands, New Zealand, Norway, Sweden, and the US proposed to ban the fuel in the Arctic arguing that a single spill “could have devastating and lasting effects on fragile Arctic marine and coastal environments”.

But Russia argued a ban would “negatively impact the local communities and industries of the region” which depend on ships to bring fuel, food and goods to remote areas and that the “potential benefits [of the ban]… remain unclear” when considering national efforts to reduce the risk of oil spills.

A watered down version of the proposal is up for consideration at the next meeting of the IMO’s environmental protection committee in November. That is the last chance for delegates to make significant changes to the draft.

Campaigners argue the benefits for communities and the environment of avoiding an HFO spill in the Arctic outweigh small increases in costs for switching to cleaner fuels, which should be borne by states.

“The danger of an Arctic HFO spill is the combination of knowing its major impacts while not knowing how to clean it up,” Ilan Kelman, professor of disasters and health, at University College London and at the University of Agder, Norway, told CHN in an email.

“We do not have sufficient techniques or technologies for fully recovering released HFO or cleaning up its damage efficiently. We do not even have a detailed understanding of HFO’s behaviour and persistence in the wide ranges of Arctic temperatures and wave conditions. The possible environmental harm from an HFO spill is immense with limited options for averting this destruction,” he said.

And yet, to bring Russia onside, waivers were introduced for Arctic coastal nations’ ships operating in their own waters. In 2019, this would have made 366 ships eligible for a waiver – including 325 Russian-flagged vessels, according to the ICCT.

“Not all of these ships are re-supplying Arctic communities. Most of them are transporting resources extracted from the Arctic,” Comer told CHN.

Waivers came on top of exemptions, including for recently built ships with fuel tanks designed to prevent spills. Most of the largest oil tankers, built after August 2010 and operating in the Arctic – many of which transport Russian oil  – already meet exemption criteria under the current proposal, Comer said.

Most new bulk carriers and oil tankers joining the Arctic fleet will likely join the exemption list and be allowed to use and carry heavy fuel oil until 2029, Sian Prior, lead advisor to the Clean Arctic Alliance, told CHN.

“This is unacceptable,” she said. “If exemptions and waivers are included than the reality will be that little will change when the ban comes into effect in the middle of 2024.”

“In order to provide the Arctic with the protection so desperately needed, the Clean Arctic Alliance is calling for the draft Arctic ban regulation to be strengthened with no exemptions and no waivers.”