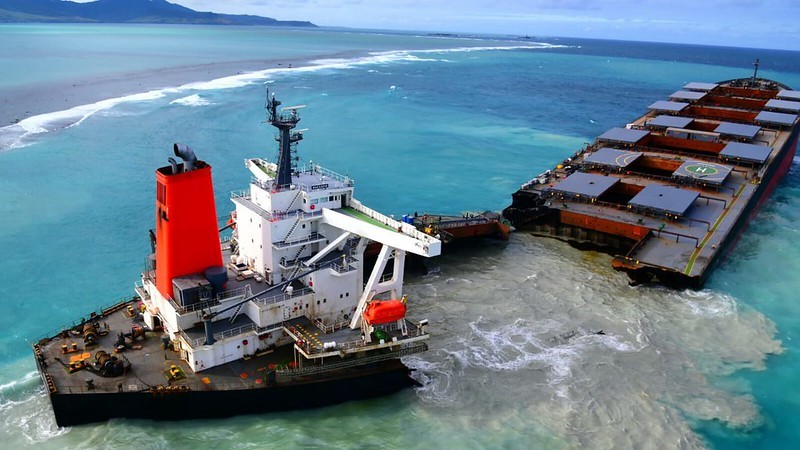 The MV Wakashio pictured off the coast of Mauritius on 17 August 2020 (Photo: IMO/Flickr)

As Mauritius counts the cost of a devastating oil spill, experts warn compensation payments could be limited by a technicality.

On 25 July, Japanese-owned bulk carrier MV Wakashio ran aground on a coral reef off the coast of Mauritius, leaking up to 1,000 tonnes of heavy oil into a pristine lagoon.

Its location on the edge of protected fragile marine ecosystems and a wetland of international importance made the spill one of the worst environmental disasters ever to hit the western Indian Ocean.

Yet because the oil came from a ship designed to transport solid cargo, Mauritius could be eligible for less than 2% of the maximum compensation available when an oil tanker is wrecked. The compensation claim will be decided by the courts in Mauritius once the full impact of the spill has been assessed.

On Wednesday, dolphins washed up on Mauritius’ white-sand beaches and died. The pollution has dashed hopes of reviving the fishing and tourism industries from the economic fallout of the coronavirus pandemic.

“It’s discouraging. It really has affected everything,” Yuvan Beejadhur, a former blue economy expert at the World Bank and a coordinator of citizen movements in Mauritius, told Climate Home News.

Earlier this month, shipping company Nagashiki, which operated the vessel, confirmed that Mauritius was seeking compensation for the spill.

In a statement, Nagashiki director Yoshiaki Nagare, apologised for the incident and said the company was “aware of the responsibility of the parties concerned and intended to respond in good faith to damages in accordance with applicable law”.

Ambassador Jagdish Koonjul, Mauritius’ permanent representative to the UN, told CHN the country had received “an enormous amount of goodwill” from the Japanese ship owners and the international community, with around 60 experts helping the island’s authorities to assess the long-term impact of the spill.

However, securing “fair” compensation could be challenging, according to Jason Chuah, professor of commercial and maritime law at City University’s Law School, in London, UK.

Had the MV Wakashio been an oil tanker, Mauritius would have been eligible for up to $1 billion in compensation under maritime law, he wrote in a blog post. Instead, because it is a bulk carrier, compensation could be capped much lower and Mauritius may be entitled to a maximum of $18 million.

The difference is based on the assumption bulk carriers, which carry solid cargoes like grain or coal, have lower pollution potential than tankers.

“But try telling that to the people whose livelihoods have been devastated by 1,000 tonnes of oil spilled,” said Chuah, of City University.

Ships have got bigger since those rules were written and carry more fuel, so even bulk carriers can cause significant spills, explained Regina Asariotis, a maritime lawyer at Unctad, the UN body dealing with trade and development issues.

Ambassador Koonjul said the international community should reconsider the legal framework and align regulations for both tankers and bunkers “to make sure that more than adequate compensation is given to any oil spill”. “Because an oil spill is an oil spill, whether it is caused by a bunker or a tanker,” he said. “We had never expected how huge this kind of spill could be.”

He added: “Tourism and preserving nature is all we have as resources and if these are damaged then obviously it’s going to be extremely bad for us. It is high time for small islands to look into how to better prepare ourselves to this kind of damage.”

The UN has expressed its intention to set up a recovery fund to support the Mauritian government and provide financial relief to fishermen who have lost their income.

Although the full cost of clean-up and extent of the environmental, social and economic impact of the spill will take a long time to establish, campaigners fear the company responsible will get off lightly.

“The spill has impacted our livelihoods and our reputation as being a clean island is totally tarnished. These are costs that need to be evaluated,” said Beejadhur.

“International maritime law favours vessels, it does not favour the communities that rely on corals and lagoons to survive. It may be hard to get compensation to the scale that we need.”

Under international law, compensation for oil spills are capped regardless of the extent of the damage. That is unless a court can demonstrate it resulted from a deliberate act or omission by the shipowner, “committed with the intent to cause such loss” – a high degree of culpability that is difficult to prove.

The fallback is the 2001 Bunker Convention, which imposes a strict liability on shipowners in the event of a spill. However, the amount of compensation that can be paid is capped by a separate legal framework and dependent on the size of the ship.

Had Mauritius ratified a protocol which updates the cap for compensation, the island could have received up to $65 million, according to some estimates — still far below the sums available from an oil tanker wreck. Ambassador Koonjul told CHN Mauritius was taking the necessary measures to ratify the protocol.

“By limiting the liability we are allowing companies to externalise the damage to the people that they have harmed rather than taking full responsibility… we need to rethink whether it’s consistent with international environmental law,” Alex Lenferna, a climate justice advocate for 350Africa, whose family originated in Mauritius, told CHN.

If polluting doesn’t come at an expensive cost, then the fossil fuel industry has every reason to “be around for much  longer,” he added.