Health restrictions by the German authorities left no alternative but to defer negotiations planned for October, UN Climate Change said 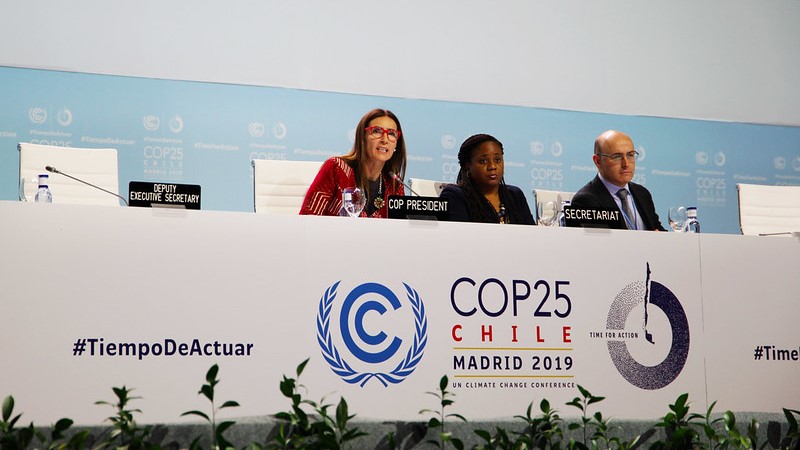 Chile's environment minister Carolina Schmidt (left) will continue to preside over the climate negotiation process until the start of Cop26 in Glasgow in November 2021 (Photo: Un Climate Change/Flickr)

There will be no UN climate negotiations this year, after preparatory talks scheduled in October have been postponed a second time into 2021.

On Monday evening, top climate diplomats decided the intersessional meeting which happens every year between UN climate summits in Bonn, Germany, where UN Climate Change is headquartered, would not be able to take place on the proposed dates of 4-12 October. A new date for the meeting is yet to be decided.

The meeting, initially scheduled in June, was tentatively moved to October after the coronavirus pandemic made it too risky to hold international conferences. The next major summit, Cop26 in Glasgow, UK, has been pushed back to 1-12 November 2021.

The UN Climate Change bureau, which is constituted of 11 climate diplomats from around the world, met at short notice on Monday after the German government announced last week it would extend a ban on large events until at least the end of October, to avoid a new wave of coronavirus infection.

In a statement, UN Climate Change secretariat said the decision was based on the need to ensure “the well-being and safety of all involved under the current travel restrictions and guidelines from local German health authorities”.

Earlier this month, observers to the climate talks also raised concerns after top diplomats presiding over the process warned participation at the October meeting would likely have to be restricted to ensure physical distancing inside the conference venue. UN Climate Change said the talks’ delay to 2021 was also based on  the need to ensure “full inclusion and participation”.

Members of the bureau regretted having to take the decision but stated there was no alternative, the statement said.

Federica Fricano, a member of the UN Climate Change bureau and Italy’s director of international climate negotiation, said in a tweet the bureau would meeting again soon to discuss the work ahead. “Climate change is and remain[s] the emergency to tackle,” she said.

The Bonn meeting was expected to make progress on the last unresolved issues of the Paris Agreement rulebook, which was supposed to be finished in 2018. Climate diplomats have yet to agree the rules of a new global carbon market, the transparency framework for reporting emission reductions and the timeframe for aligning countries’ climate plans.

Chile, which is still officially presiding over the Cop process, the UK, which is due to take over at the start of Cop26 in Glasgow, and the UN Climate Change secretariat committed to do “everything to drive the process forward despite the adverse circumstances”.

Carolina Schmidt, Cop25 president and Chile’s environment minister, said this would include a continued dialogue with countries to submit tougher climate plans before the end of the year and the formulation of a clear roadmap to Cop26.

However, the absence of any climate negotiations this year will add to concerns about how to rebuild momentum ahead of critical climate talks in Glasgow next year. Governments are expected to bring strengthened contributions to stabilise global warming “well below 2C”, as agreed in Paris.

The announcement comes amid intensifying climate impacts and exceptional heat in the Arctic circle, with temperatures reaching an all time high of 38C in the Siberian town of Verkhoyansk on Saturday. The initial reading, which needs to be verified, is 18C higher than the average maximum daily temperature in June.

UN Climate Change executive secretary Patricia Espinosa said the Covid-19 “has not put an end to climate change, which continues to accelerate”. “It has changed the way we work, but it has not stopped it,” she said in a statement.

Sonam Wangdi of Bhutan, the chair of the Least Developed Countries negotiating bloc, said Covid-19 was demanding flexibility but “climate action must continue”. He urged all countries to enhance their climate plans and for rich nations to fulfill their commitment to mobilise $100 billion a year by 2020 to help vulnerable countries cope with climate change.

The youth constituency at the climate talks tweeted that despite the lack of climate talks this year, young people were “not loosing a year to fight for climate justice and ambitious climate action”.