The coronavirus pandemic has pushed climate diplomacy online, greening much of UN Climate Change’s operations but virtual meeting bring their own challenges 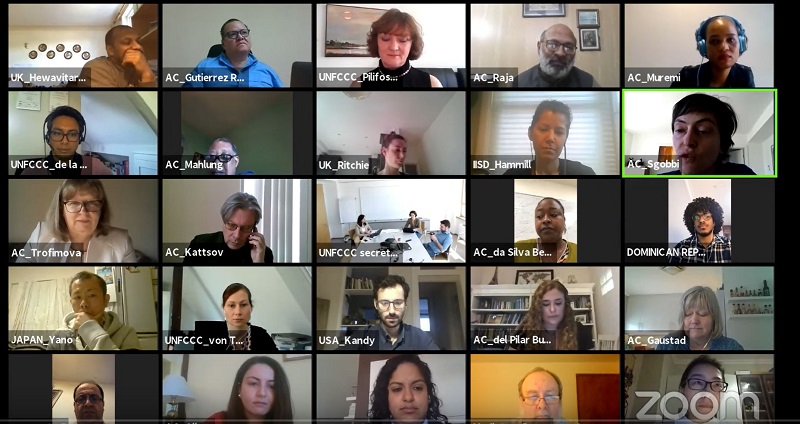 As the coronavirus pandemic sweeps across the world, the climate diplomacy that was so critical to leverage governments into strengthening their climate plans this year is moving online.

And with it, the tough diplomatic and political ask expected ahead of a critical climate summit in Glasgow, or Cop26, in November has also become a technological challenge.

“Some of us might be cut off or the sound might not work very well so we will need to adjust to that. As the Adaptation Committee, we can do it very well,” smiled Olga Pilifosova, manager of the Adaptation programme at UN Climate Change secretariat, from an online Zoom meeting.

Adaptation to the impacts of climate change – such as heatwaves, floods, and droughts – is part of a two-pronged UN strategy alongside mitigation, focused on cutting greenhouse gas emissions.

The coronavirus which as of Tuesday killed more than 36,500 people worldwide has forced UN Climate Change to find new, greener, ways of working, pushing climate diplomacy into the digital space.

The Cop26 presidency team is holding “virtual trips” and international meetings through video and phone conferences.

I will shortly be co-chairing via video link the India-led global Coalition for Disaster Resilient Infrastructure.

We must continue to deliver progress in tackling climate change and this 🇬🇧-🇮🇳 partnership is an important step towards doing that. #COP26 🌎

UN Climate Change announced it won’t hold any physical meetings until the end of April and although a number of meetings have been postponed, smaller sessions have moved online. It’s too early to say whether the pandemic will affect Cop26, and UN Climate Change is set to decide on Wednesday evening about a mid-year session due in Bonn in June.

As Zoom diplomacy takes hold, the informal spaces for negotiators to meet at the coffee machine or for a corridor chat have been replaced with a much more streamlined process online.

While the cancellation of all carbon-intensive air travel is a positive side effect of the crisis for the international climate community, adapting to virtual meeting brings its own challenges.

For many developing countries, where fibre-optic cables are not available and bandwidth is low, connectivity, and therefore participation, has proved difficult at times.

“The problem is that in some countries, internet is still an expensive luxury,” Alpha Kaloga, a climate negotiator from Guinea, told Climate Home News.

But delay to climate action is not an option. “Given the urgency of the climate crisis, we want and need the work to get done, but we want it to be inclusive,” Kaloga added.

During a virtual meeting of the Warsaw International Mechanism – the international framework which addresses climate impacts which emissions cuts and adaptation efforts cannot prevent – one of two African representatives dialling in from Sudan was unable to participate because of low bandwidth.

UN Climate Change is working to ensure everyone can participate to online meetings.

In 2018, UN Climate Change spent $12 million on travel for participants and staff. Now, its travel team is offering to book delegates with connectivity issues hotel rooms close to their homes, to ensure they can still participate in online sessions.

Where possible, other UN regional offices could also be put at delegates’ disposal dependent on domestic travel restrictions.

And a narrow two-hour window in the middle of day Central European Time has been identified to accommodate the greatest time zone span. It is daytime in Europe and Africa, evening in Asia, early morning in the Americas, but the middle of the night in the Pacific.

While virtual meetings are a necessary short-term fix, in the longer-term poorer nations will need additional technological capacity.

Tenzin Wangmo, of Bhutan and the lead negotiator for a group of Least Developed Countries (LDC), told CHN that even in small meetings, LDC negotiators often had to turn off the video function to ensure better connection.

“Infrastructure is going to be a challenge for the LDC group.  Definitely, it’s going to impact the substance of the discussions,” she said, adding that many LDC countries had just started to work on their new climate plans and much of that work was now halted.

“I don’t think having a meeting using technology can help build trust between each other,” she added.

Speaking to CHN, Carlos Fuller, of Belize and lead negotiator of the Alliance of Small Island States (Aosis), said it was difficult to imagine online meetings extending to the whole climate diplomacy process and to the climate talks which bring together nearly 200 countries.

“We [Aosis] interact well because it’s a smaller group and we know each other. But I still want to see how a global meeting is going to work on a Zoom platform,” Fuller said. Wangmo agreed: “I don’t think we can bring all-party negotiations online. I think that would impact participation.”

Part of the reason is that for an online meeting “to be successful, it is to be short,” Fuller added, finding a silver lining in the need for some efficiency improvement.

Virtual meetings also remove the human contact, personal ties and spontaneity in discussions that have long been the hallmark of diplomatic deal-making. Popular online meeting platforms also don’t support instant translations and negotiators can no longer rely on body language.

“Negotiations are like role play and you really need to be face to face to do that,” one diplomat told CHN. “You get a feeling if there is tension in the room, how people react to propositions and it’s easier to test ideas”.

This bargaining aspect of diplomacy has seen negotiators long favour closed doors meetings to broker deals and compromise. Online conversations are much easily recorded, which may allow more transparency but does not suit everyone’s negotiating strategy.

“That changes the type of conversations that can take place,” the diplomat added.

Many agree UN Climate Change processes would benefit from more efficient processes, more virtual meetings and less international travel. “This is forcing us to think about how we operate,” one veteran negotiator told CHN, “but it is not going to create the dynamic that we need” before Cop26.

“And a crisis coping-mechanism is not necessarily the way we want to adapt in the long term”.