No longer able to take to the streets, activists are upping their digital game and making common cause with social justice campaigners 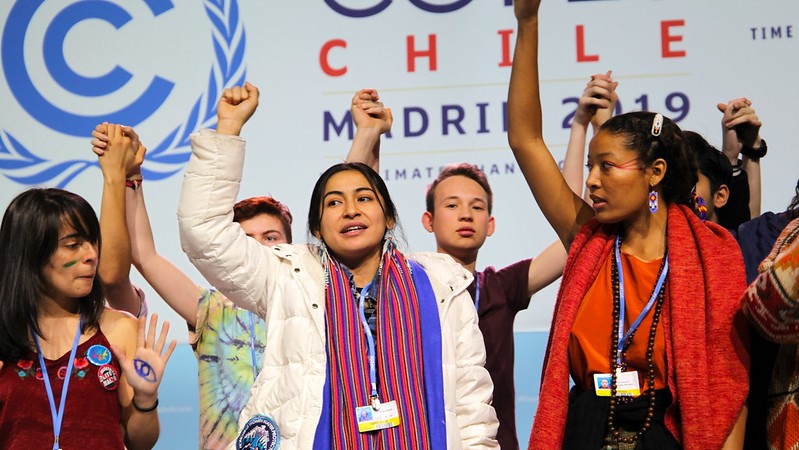 Social distancing rules to contain the spread of coronavirus have hit the climate movement’s physical essence: taking to the streets in mass protests.

But as campaigners move online and strikes go digital, the climate movement is fostering new tactics and deepening alliances to advocate for more resilient economies and societies with people and planet at the centre.

“The decisions that governments are making now on how they shape their recovery plans are fundamental for whether we stay below 1.5C or 2C,” Jennifer Morgan, executive director of Greenpeace International, told Climate Home News, referring to the global warming limits in the Paris Agreement.

Covid-19 has exposed the fragility of the global economy, she said, its food supply chains, inequality between rich and poor, access to healthcare and the impacts of air pollution on the severity of the virus.

Learning from recovery efforts following the 2008 financial crash, Morgan warned “just doing some ‘green stimulus’ isn’t going to cut it”. “It is the moment to fundamentally change that underlying system,” she said.

In recent weeks, Greenpeace has been having conversations with inequality and social justice organisations, human rights and health groups and labour unions.

“We have an opportunity to create the world that we want to create now…. a much more just and healthy population and planet,” Morgan said.

Outside the climate movement, calls for broad movement-building are being echoed.

“It will take all of us, everybody in society. Our world must change,” she told CHN. “No leader to any movement wants to see a world that is not inclusive and where people are left behind.”

In recent years, the climate movement has been compelled to address social justice issues. The “yellow vest” protests against a fuel tax hike in France in 2018 and a social uprising against inequality in Chile in 2019 formed the backdrop to the last two rounds of UN climate talks.

Tasneem Essop, executive director at Climate Action Network (CAN), said those events had spurred collaboration between movements and progressive constituencies.

“This coronavirus crisis will help deepen and strengthen that linkage,” she told CHN.

While analogies between Covid-19 and the climate crisis, and debates about how to rebuild economies are live within the climate community, campaigners are wary of being seen as insensitive to people’s immediate suffering.

Social science research based on communities that have experienced extreme weather events suggests it is unwise to rush into conversations about the climate change connection, said Robin Webster, senior climate change engagement strategist at Climate Outreach, a charity specialising in climate communication.

“It is distasteful to be talking about emissions while people are losing their jobs, it can really backfire. But there is definitely a window of engagement that tends to open up after the event, when people are able to reflect,” she told CHN.

Climate campaigners have united in saying the ongoing public health crisis must be governments’ top priority. But they also warn the pandemic has not marked a truce for climate impacts.

The past five years were the hottest on record and the trend is anticipated to continue, according to World Meteorological Organization estimates. Pacific islands took a lashing from Cyclone Harold, a category five storm, earlier this month. In the northern hemisphere, frontline climate groups are preparing for hurricane and wildfire seasons.

Meanwhile, campaigners have been carefully tracking governments’ response to the economic slowdown and the multi-billion bailouts for hard-hit industries including airlines, oil, gas and coal.

“We are not lifting our foot from the pedal,” said Essop. “There can be a lot that happens under the veil of a crisis that is not good for the future.”

In France, a $22 billion package to support strategic industries – largely the aviation and automobile sectors – with no conditions attached, did not slip passed French activists.

As the bill was voted through the National Assembly, Greenpeace France urged people to message lawmakers backing the bill by email and social media, demanding green conditions for relief.

The chair of Emmanuel Macron’s ruling party in the assembly, Gilles Le Gendre, received around 25,000 emails in two days. His inbox under siege, he rang Greenpeace France’s executive director Jean-Francois Julliard, asking him to halt the campaign.

For Julliard, the phone call was an opportunity to discuss the bill.  This “shows how activism can work right now,” Greenpeace’s Morgan said.

The strategy may well inspire others. “Bombarding key decision makers with letters urging them to ensure the coming economic recovery plans are climate smart would be a valuable intervention,” said Mohamed Adow, director of Power Shift Africa.

The civil disobedience group Extinction Rebellion (XR) has also been thinking of new ways for people to put pressure on their governments from home.

The group has been keen to highlight what corporations and governments could do if similar amounts of money and energy deployed to respond to the pandemic were applied to the climate crisis.

Sarah Lunnon, political circle coordinator XR UK, told CHN the trillions pledged in economic bailout by the world’s largest economies showed that that the previously unthinkable was possible after all.

“What governments have been prepared to do has been absolutely jaw-dropping – how far they have gone and how quickly they have moved.

“Politicians said it was politically not credible to make the changes we have been calling for but the Covid crisis has shown that we can take radical political action,” she said.

For the 50th anniversary of Earth Day on 22 April, a three-day online programme of webinars, discussions, story-telling and performances has been organised to discuss what resilient economies and a climate-proof world may look like.

Dillon Bernard, communication director of Future Coalition, a US-based network of youth-led organisations focused on creating social change, said the event was also geared to grow the climate movement in the US and register new voters in the run-up to the November presidential election.

“This digital infrastructure and strategy can really supercharge our movement in 2020 and once we can open our doors and step outside we are going to be even more powerful,” he said.