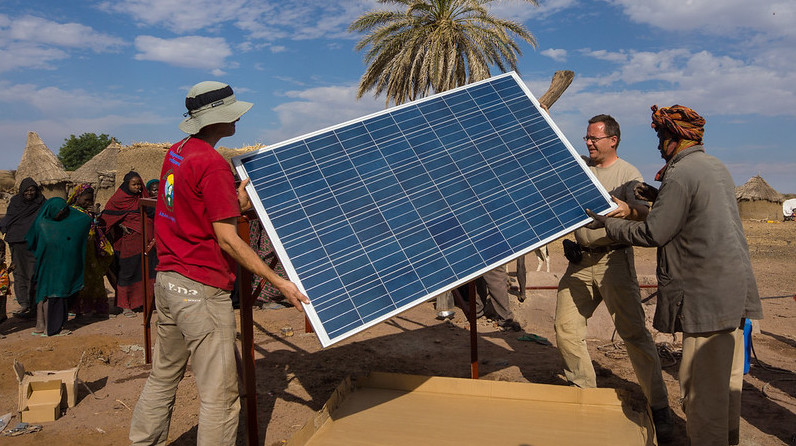 Despite a historic deal between major producers to prop up oil prices, cheap fossil fuels and the economic slowdown caused by the coronavirus risk are hampering a shift to renewable energies in 2020.

The International Energy Agency (IEA) said it is reviewing its October 2019 forecasts that 2020 will be a record year for additions of electricity generation capacity for solar, wind and other clean energies, as well as that total renewable-based power capacity will surge by 50% between 2019 and 2024.

“There’s a chance that 2020 may not be a record,” said Heymi Bahar, IEA senior analyst of renewable energy markets and policy, told Climate Home News. “Every day we see something either about a new lockdown, or a resuming of some construction activity.”

Covid-19 had killed more than 126,000 people worldwide by Wednesday.

Installations of solar photovoltaic (PV) panels on the roofs of businesses and homes, expected to help drive future growth, were hard hit by the economic slowdown. They often require workers to be physically close together to install panels, which is difficult with rules on social distancing to slow the spread of the coronavirus.

Workers on other projects, such as installing huge wind turbines or building hydropower dams, can typically be further apart.

Rooftop solar “may sound a bit marginal but represented a fifth of global renewable energy additions in 2018-19 and 40% of solar PV,” he said. Renewables made up 26% of global electricity generation in 2018 and the IEA’s October 2019 forecast of a 50% increase by 2024 would total a 1,200 GW addition to current capacity.

Disruptions for renewable energy are in the shadow of the far greater turmoil in fossil fuel markets.

At the weekend, OPEC, Russia and other producers agreed over to cut output by 9.7 million barrels per day (bpd) in May and June, under pressure from US President Donald Trump. The cuts are around 10% of supply before the pandemic, but probably only about half the slump in demand. Cuts are to last until April 2022, with a cut of 5.8 million bpd in the final 16 months.

Brent crude oil was trading at around $30 a barrel, less than half the price of around $66 at the start of 2020 but up from lows around $25 in early April.

“When you cut around 10 million barrels and the cut you need is 20 to 30 million you are not really doing anything to balance the market,” said Erik Holm Reiso, global head of consulting at Rystad Energy in Oslo. “And it’s not positive for renewables if oil prices are low.”

Low fossil fuel prices are a threat to a transition to renewables under the 2015 Paris climate agreement, because it may make it less attractive to shift, for instance, from a gasoline-powered car to an electric model, or to raise capital to build a wind farm rather than to extend the life of an existing coal plant.

Once the worst of the human crisis passes “there will be a new focus on renewables to dig countries out the economic hole after coronavirus. Governments need to incentivise industrial activity. You can direct that – renewables are an obvious way,” he said.

Andrew Grant of the Carbon Tracker think-tank in London said the unprecedented deal among oil producers was driven by self-interest and did not herald any wider cooperation to confront climate change.

“We are going to have to come up with a sustainable model [for reducing fossil fuel production] that doesn’t rely on an economic crisis,” he said.

Emergency stop-gap measures to shore up the oil price were a stark contrast to longer-term efforts to align energy demand with the Paris Agreement, which seeks to cut greenhouse gas emissions to limit droughts, heatwaves, floods, and intense storms.

Grant estimated that oil demand would have to fall steadily each year by a million barrels per day to get on track for the Paris Agreement.

Covid-19 lockdowns are disrupting supplies of solar panels, Bahar at the IEA said, because China accounts for 70% of global production, and another 15% comes from Chinese firms operating in other countries in south-east Asia.

Since late March, however, China has reopened many firms as new infections fell.

“They are ramping up to meet demand. That’s good news,” he said. But while Chinese ports may be able load panels onto ships for export, foreign ports may be unable to unload them when they arrive because they are closed or operating with reduced capacity.

He also noted that demand for biofuels, often added as a blend for gasoline in many nations as part of renewable energy goals, was suffering simply because people are driving their cars less.

The IMF has forecast that the world economy will contract 3% in 2020 because of what it calls the Great Lockdown. That is also likely to depress greenhouse gas emissions this year from record highs in 2019.

One major challenge is how to spur renewables more than fossil fuels when energy demand picks up, to avoid a rebound in emissions. In the wake of the financial crisis a decade ago, carbon emissions leapt by 5.9% in 2010 after a 1.4% decrease in 2009.

Bahar said governments could help renewables, for instance in China  and the United States, by extending incentives for connecting solar and wind projects that are due to expire at the end of the year.

And many governments say that climate change should be at the heart of any post-Covid recovery once short-term measures stabilise the economy.

Gerard Wynn, an energy finance consultant at the Institute for Energy Economics and Financial Analysis, said it may also be time to consider measures such as wider taxes or fees on fossil fuels to help cleaner energy.

They may be less controversial now because low prices will mute their impact on consumers, if they are pitched by politicians as part of a green recovery package.

Wynn noted that former vice president Joe Biden, the presumptive Democratic presidential nominee to take on Trump in the November election, favours a “Clean Energy Revolution” including prices on carbon.

For Europe, Wynn calculated that an economy-wide fee of €25 per tonne of carbon dioxide (CO2) emissions could raise a dividend worth about €370 ($400) for every household. Such a fee could be imposed at source, such as coal mines, or oil and gas producers, he said. Household energy bills would rise but Wynn estimates that most people would still have money left over to spend.

“It sounds like a fantasy – but maybe this is a good time to do it?” he told CHN.